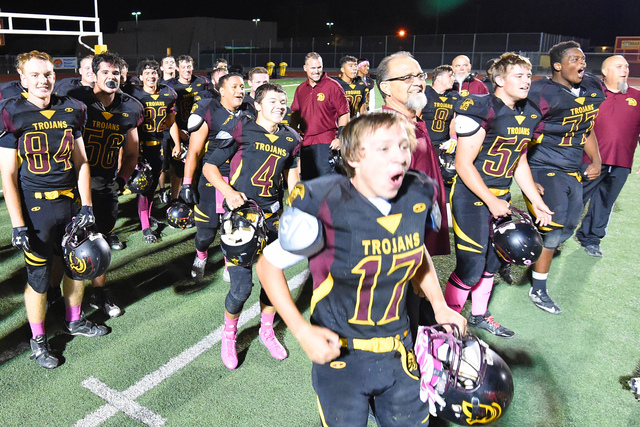 The Trojans (3-3 overall, 2-2 Sunset League) travel to face Spring Valley (4-2 , 3-1 ) on Friday at 7 p.m. Spring Valley has one of the strongest defenses in the league. In the past six games, the Grizzlies have given up 43 points for an average of 7.1 points per game.

The defensive line is big and likes to put pressure on the passer. The line has 31.5 sacks in 6 games which is 5.25 sacks per game.

Spring Valley is not a passing team. In six games, they have only passed for 209 yards. This team loves to run the ball and has 1,481-yards rushing for the year. Their top rusher is senior quarterback Christian Tasi, who has 56 carries for 561 yards. He is averaging 10 yards per carry. Tasi is successful because of his size at 6-foot-1 inches tall and 170 pounds. His running style is to run right at his tacklers.

In addition to Tasi, the Grizzlies depend on Michael Bianco to do a lot of running. Bianco has 77 carries for 370 yards.

Trojans Coach Joe Clayton said for Spring Valley he won’t change things up. He said you can count on his team to keep the ball on the ground.

In the last two games, Pahrump has over 547 total yards on offense with 500 of that being rushing yards by Gascoigne and company. Gascoigne had 95 yards against Cheyenne.

Spring Valley being a rushing team helps the Trojans for they are a team that does very well against teams that like to run. Also with a ground attack it means the Grizzlies will not be putting up a lot of points. Their offense is slow scoring and averages just 22 points per game. The Trojans average 26 points per game.

Jeff Koenig is in his second year as the head coach of the Rosemary Clarke Middle School team. Prior to that he coached for five years in Pop Warner here in Pahrump. The middle school started using the Trojans offense last year.

Koenig has been to all the Trojans’ home games and some away games. He thinks the Trojans are finally getting to the ball defensively. “In the Cheyenne game Pahrump rallied to the football and tackled well,” he said. “This week this Tasi kid plays both ways and so the defense just has to wear him down.”

1. The team has to keep rallying to the ball and tackling well. Especially the defensive corners. To stop Spring Valley it’s all about the gang tackling. 2. The defensive line must penetrate. If this happens the linebackers can take care of any run. The front line can’t let the offensive line into the second level where the Trojans linebackers are. If this happens Pahrump will have issues. 3. On the outside he believes that defensive ends Jeremy Coates and Jeremiah England match up well. These to must penetrate and get pressure on the QB.

Koenig feels to win the Trojans offense must just keep doing what they do well and that is run the ball to control the game.

“Look for a close scoring game,” Koenig said. “Pahrump has to control the clock. We have to gain positive yards on first down and be on time. Stay on time is the most important thing.”