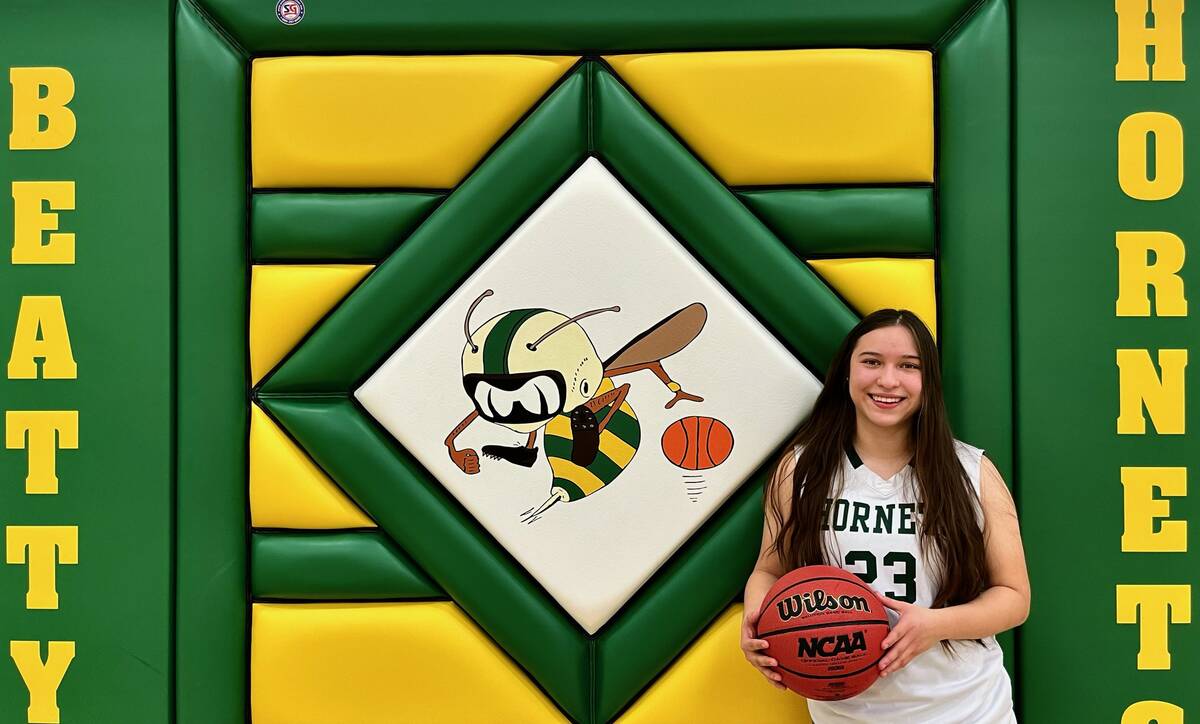 From the biggest city in Arizona, to an unincorporated town in Nevada, Beatty High School senior Cristel Lopez has lived on both ends of the population spectrum.

Lopez was born in Phoenix and lived there for the early stages of her life. When Lopez was eight, her family relocated to Amargosa Valley to be closer to other family members.

Despite being young when she moved, Lopez remembers the huge difference between Amargosa and Phoenix.

“Phoenix is very urban,” Lopez said. “I was expecting Amargosa to be the same as Phoenix, but it ended up just being desert. It was kind of weird at first, but I got used to it.”

She went on to say that she really enjoys the peacefulness and calmness that comes with living in a small town like Amargosa.

Lopez has a full slate when it comes to sports. She is a multi-sport athlete for Beatty – participating in volleyball, track and field and basketball.

Lopez first started playing volleyball in middle school. She saw some of her friends playing and thought it looked fun.

As a senior this year, Lopez and the rest of her volleyball teammates made it to the league playoffs.

Unfortunately, they got the short end of the stick and drew the top team in the 1A Central league, Pahranagat Valley. The Hornets were defeated in the first round by the Panthers and eliminated from the playoffs.

After volleyball season ends, Lopez doesn’t get any breaks. She jumps straight into basketball season.

Lopez’s first experience with basketball was watching a game on television. As soon as she saw it, Lopez instantly thought it was cool and wanted to play.

The first time Lopez played basketball was in sixth grade.

One of Lopez’s biggest role models is Brooklyn Nets’ star point guard Kyrie Irving. She enjoys watching the way that he handles the ball on the court and the way that he gives every game his maximum effort.

This is the first season that Lopez has played on the varsity team for the Hornets. Through her hard work, Lopez has become the leading scorer for Beatty and is one of the leaders of the team.

“It’s kind of crazy,” Lopez said of being one of the leaders of the team. “I wouldn’t have thought that I would be one of the leading scorers. It still amazes me that I am one of them.”

As one of the leaders on the team, Lopez wants the younger players to know that everyone will make mistakes on the court. It’s up to them to be able to pick themselves back up and not dwell on their mistakes for the remainder of the game.

Lopez owes her ability to get better to her head coach, Travis Barron, who pushes her to reach the limits of her playing ability on the court. He wants her to be the best player that she can be and reach her full potential.

The Hornets are currently 3-8 on the season and have a 1-3 record for league play. To turn things around this season and be able to make a run in the playoffs, Lopez says two of the things the team needs to work on are being more aggressive on defense and moving the ball around more on offense.

Following the basketball season, Lopez will be jumping straight into her track and field season for the spring. Her main events are the shot put, disc throw, the 4×100-meter relay and occasionally she’ll participate in the 100-meter dash. Her favorite event is the shot put.

After high school, Lopez is planning on taking some time off from her education and begin working. She is hoping to eventually attend college and become a dental hygienist.

Lopez and the rest of the Beatty Hornets’ next game will be this Friday, Jan. 28, when they face off against the Panthers of Pahranagat Valley.

Tipoff is scheduled for 6 p.m.