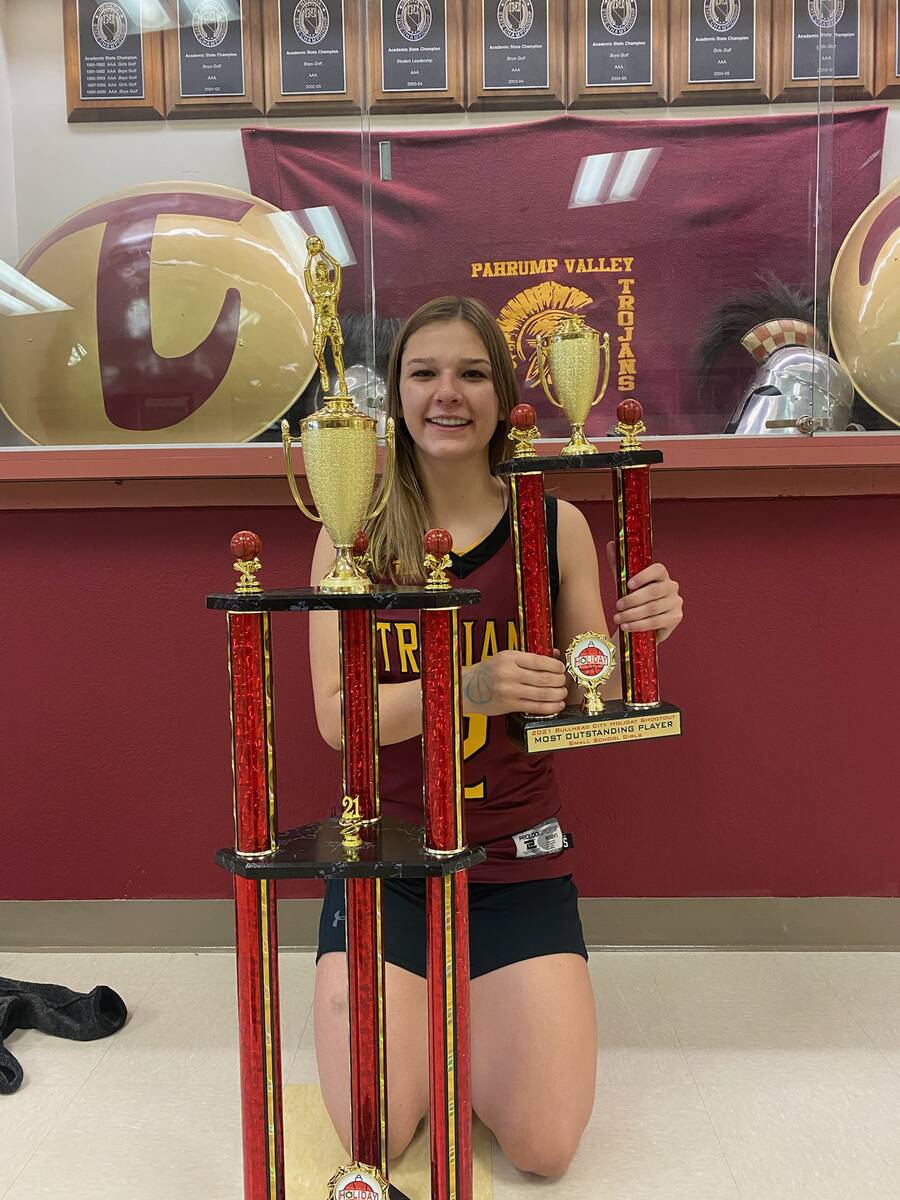 She has played on the varsity team every year in high school for the Trojans. She is Pahrump Valley’s leading scorer. She is the leader and the captain of her basketball team. Her name: Tayla Wombaker.

Wombaker was born and raised in Pahrump. The senior likes the sense of community and close-knit feeling that living in a small town like Pahrump provides.

Wombaker was introduced to basketball by her dad and her older brothers. She’d sit with her dad and watch games on TV and she saw her brothers play basketball from the Junior Trojans program all the way through high school.

It was love at first sight for Wombaker.

“I kind of just fell in love with it,” she said. “I was always big into sports, so when I tried it the first time, I knew that was my favorite from the very start.”

Tayla was just 7 when she started playing.

Wombaker made the varsity team as a freshman at Pahrump Valley. She went into tryouts thinking there were limited spots on the team because of returning players who’d played for multiple sesasons.

“I had played with girls that made the varsity team their freshman year before me,” Wombaker said. “I watched them in eighth grade and I was like, ‘Oh, they’re really good.’ I just didn’t expect for me to make the varsity team. I knew who they had and then I came in and it was very surreal. I felt very blessed.”

Getting to play at the varsity level during her freshman year helped her tremendously with evolving as a player, Wombaker said.

Her first game didn’t go the way she hoped. Wombaker entered the game midway and turned the ball over the first two times she touched it. Following the turnovers, she went back to the bench and felt a ton of pressure on her shoulders.

While on the bench, Wombaker received positive feedback and reassurance from her teammates and the coaches telling. They told her that she was ready to play at that level — but said that she just needed to trust herself more.

Following the pep talk, she went back out and made positive plays and gained a lot more confidence in her playing ability.

She addressed the “elephant in the room” with COVID-19 going around last year and canceling the 2020-21 basketball season. When the players found out they weren’t going to be able to have a season, Wombaker said they were all completely devastated.

“I think everyone was in tears,” Wombaker said. “Everyone was very upset because last year was our year. We were going to win state — we were at our prime. We had all been playing together for three years at that point. We were ready to win, to take home the title. It felt like all those years of hard work were flushed down the drain.”

Wombaker said the team was a little worried that this season could be affected by the virus.

During the fall, she played volleyball and their team had to pause for two weeks because multiple players tested positive for the virus. It also meant the team had to forfeit two games.

Up to this point, Wombaker and her teammates have had nothing to worry about. In fact, Wombaker is leading the team with 13 points per game in her senior year and the Trojans have thrived in every game this season.

The Pahrump Valley girls basketball team went into their holiday break with a perfect 12-0 start to their season.

It’s the best start the program has had in 15 years.

Before starting their holiday break, the Trojans participated in the Bullhead City Shootout in Bullhead City, Arizona.

The team went 3-0, defeating all of their opponents by more than 30 points. On top of winning the tournament championship, Wombaker was voted as the tournament’s Most Valuable Player.

“It was great,” Wombaker said. “When we win tournaments, it’s beautiful to see the support of the teammates and the hard work. Getting that win and that trophy and the MVP award was really nice.”

Wombaker owes the team’s great start to the camaraderie and the “we’re-all-going-to-work-hard” attitude that the players have. Head coach Bob Hopkins demands excellence, she said, and helps all of the players become better.

“I love his coaching style,” Wombaker said. “I think that without him this year, we would have struggled big time. He’s done a great job with the young team he has and understanding his players. It means a lot.”

Once play resumes for the Trojans, Wombaker looks most forward to playing against Moapa Valley.

These two teams currently sit at the top of the 3A standings in Nevada. With Moapa having just suffered their first loss of the season, it leaves Pahrump Valley as the only remaining unbeaten team in the 3A division in the state.

Wombaker said she doesn’t just want to beat Moapa — she wants to demolish them.

She believes that the atmosphere of the game will be very exciting and they want to show who the No. 1 team in the state is.

Following the basketball season, Wombaker normally participates in track &field and plays softball, but she’s not sure if she’s going to play this season or just focus on the remainder of her senior year.

Wombaker hopes to major in special education, with a focus on either the elementary or middle school levels to be a teacher.

The Pahrump Valley Trojans will next play on Thursday, Jan. 6, when they host the Del Sol Dragons. Tipoff for that game is scheduled for 6:30 p.m.