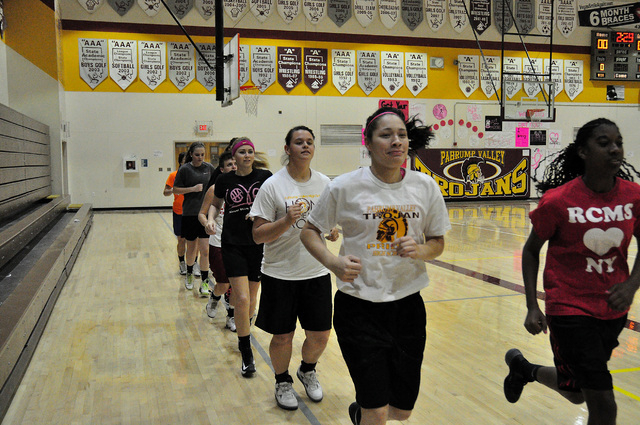 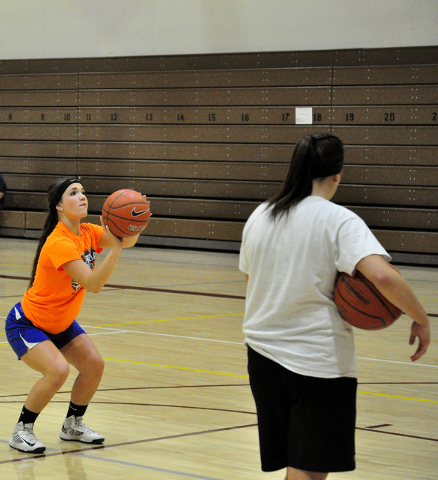 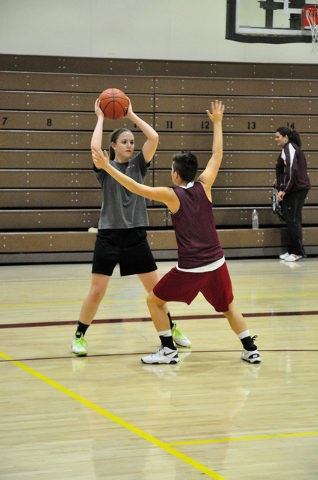 Basketball teams need height and a little bit of speed. This year the Lady Trojans might have a bit of both.

“We no longer are the shortest team in the league,” Trojans Coach Jennifer Hagstrom said.

Hagstrom returns with a group of experienced players, losing two seniors last year and have at least four returning juniors.

As an extra bonus the team adds four sophomores from last year’s 18-0 freshman team. The four brought up were C’mone Wrayball, Hellen Vann, Jordan Egan and Bethany Calvert. Of the four, Wrayball and Vann are over five-foot 10-inches tall. Add this to Alyssa Begin and Shayla Dance both near five foot 11 inches.

The Trojans will be relying on an already tested defense. Both Hagstrom and her assistant, Ed Kirkwood, really won’t be changing much defensively, just tweaking it and making it even better.

“Defense is definitely our strength and it is something we emphasize, Hagstrom said, “We are very proud of our defense and have been one of the better rebounding teams in the league.

Hagstom said her main focus this season will be on the offense. She said you can’t win games unless you put the ball through the hoop.

“Our biggest problem for us has really been our turnovers and this led to less shots during the game,” she said. “We would lose a game by 4-5 points and take 20 less shots than the other team.”

At this level the coaches stressed the need for the team to come up with more offensive rebounds.

Hagstrom knows that at the high school level offensive rebounds are huge and teams that offensively rebound generally do well.

She said one problem is that most of the kids play two or three sports and they’re not year-long basketball players. She says this has something to do with the team’s offensive efficiency.

“We’ve just got to find ways to put the ball in the hoop,” the coach said. “The freshman kids last year put a hurt on everybody and went undefeated. We are hoping some of those girls as sophomores can come in and give us a little bit of a punch offensively. This is a good group of kids and to be honest we are pretty excited about the possibilities.”

The team just had a problem putting the ball in the hoop last year and the obvious solution is they need to make more shots. According to Hagstrom, A good high school basketball team scores at 35 percent rate. A team that struggles like the Trojans, might shoot at 25 percent.

“If we don’t get those second-chance opportunities and turn the ball over, and don’t even get the shot,” she said. “That’s what kept us in games last year.”

This year the team will depend on athletes like Jill Smith, who Hagstrom said was one of the most consistent offensive players last year. She plays three sports, volleyball, basketball and softball. The coach said she plays well with Shayla Dance, a player who has made varsity since her freshman year.

“Murphy was really aggressive last year and was hitting some three pointers. Andi Bishop has also done a nice job and she has gotten a lot better over the year. She will take the ball to the basket. She also recognizes when to shoot the jumper and when to go to the hoop. I think we have a lot more tools or weapons offensively,” she said.

As far as who will bring the ball down the court this year. Hagstom is leaning towards Lauren Ashford, who she says was highly dependable last year.

“Lauren Ashford will probably still be point and we actually had a lot less turnovers last year with her bringing the ball up,” Hagstrom said. “She is left-handed which is a positive and the defenses are not used to a left-handed point guard.”

The team will rely on sophomore Bethany Calvert to give Ashford a rest.

Alyssa Murphy said there is something different about this year’s squad.

“I feel like we have more speed and accuracy,” she said. “And we have all of our same starters coming back. We just know how to play with each other better than we did last year. Amber and I have been playing together for three years, and Shayla has been on varsity since she was a freshman and I got more time playing with her.”

She agrees with Hagstrom that the defense will be the strong point of the team.

“Offense we still have to work on. We didn’t do badly on it last year but we definitely struggled against other teams,” she said.

Murphy said she will be working on her shooting this year.

“I am pretty decent with the shots but they can still use a lot of improvement.”