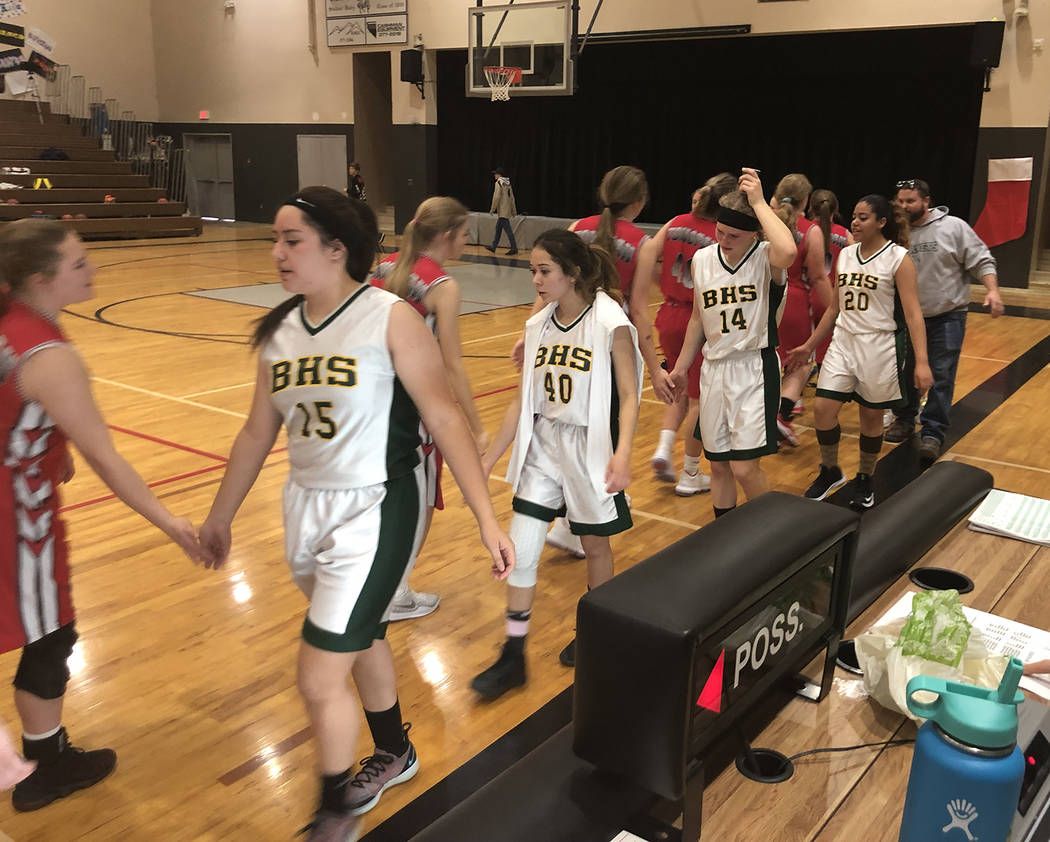 Tom Rysinski/Pahrump Valley Times Players from the Beatty and Tonopah girls basketball teams go through the handshake line Saturday after the Muckers defeated the Hornets in the Kody Beach Memorial Basketball Tournament in Round Mountain. 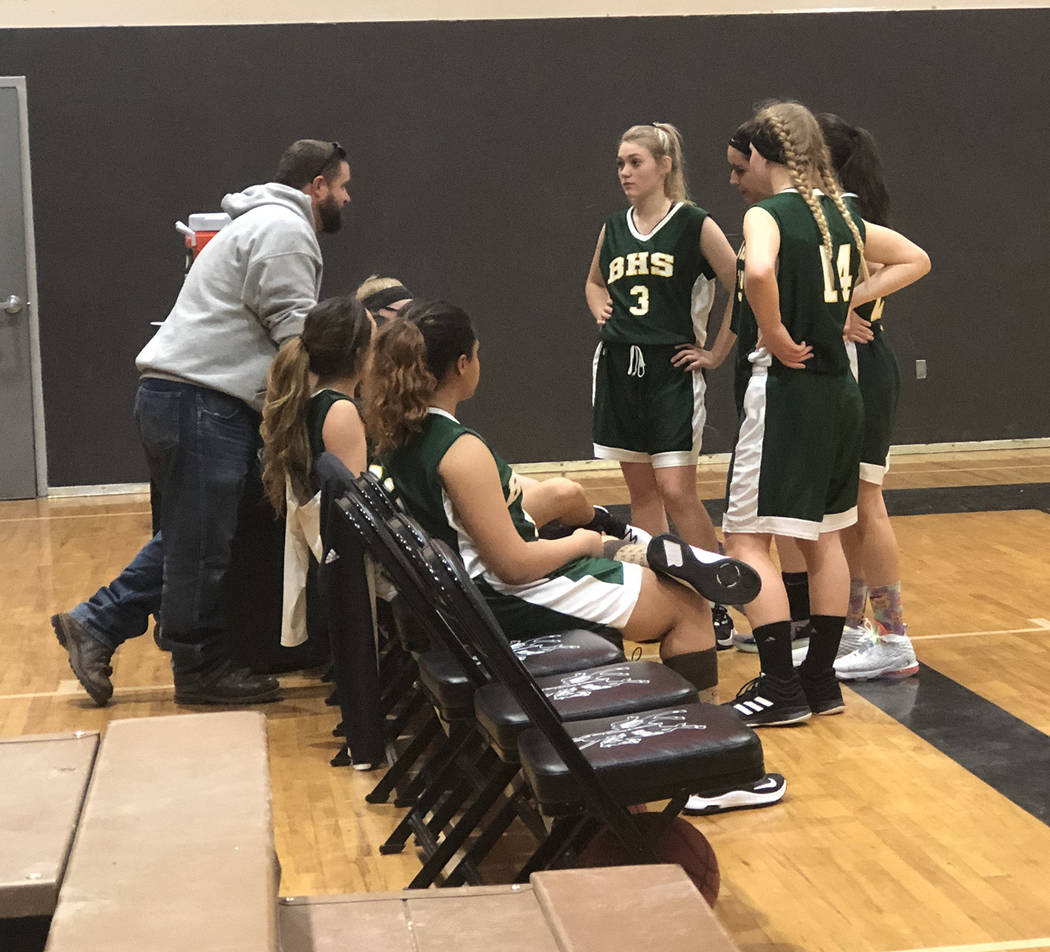 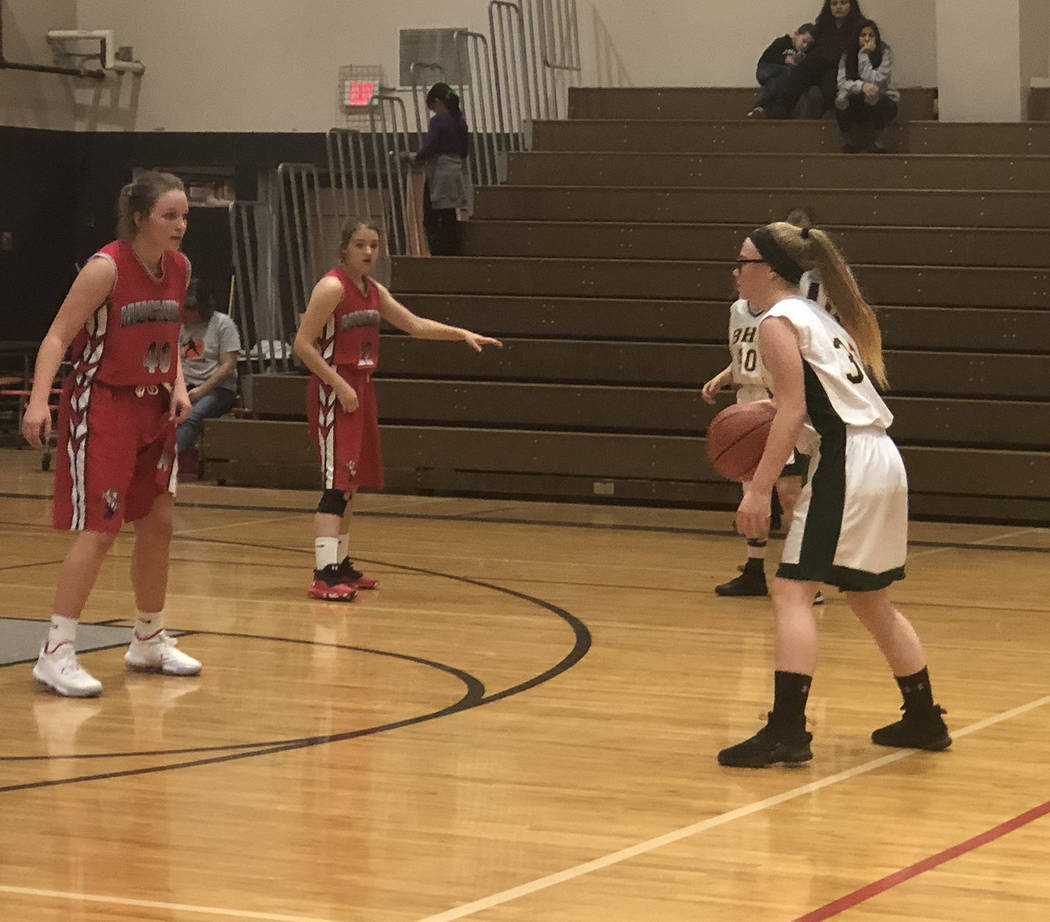 Tom Rysinski/Pahrump Valley Times Kyleigh King of Beatty ponders her next move during the Hornets' game against Tonopah on Saturday in Round Mountain. King scored 4 points during the first quarter of Beatty's 48-19 defeat.

By early afternoon Friday, the Beatty High School girls basketball team had to feel pretty good about itself. After winning two of three games in a tournament in Big Pine, California, the Hornets routed Carlin in their opening game at Round Mountain’s Kody Beach Memorial Basketball Tournament to improve to 3-1.

But the sledding got a bit rougher for the Hornets, who suffered one-sided defeats against Nye County rivals Tonopah (48-19) and Round Mountain (42-28) to fall back to .500.

But that didn’t faze assistant coach Rusty Anderson, who said the Hornets were doing a lot of things right, even as the Muckers pulled away after a tight first quarter.

“The first game against Tonopah we were matching them step for step defensively,” Anderson said. “Offensively we were passing the ball and getting in good position for shots, and they just weren’t falling. And that’s just the way it is sometimes.”

The Hornets did shoot poorly, and poor shooting has a way of overwhelming anything a team might be doing right. And it’s not always easy to convince young players of that fact, but Anderson gave it a shot.

“I said, what we’re looking at on the scoreboard is not a reflection of what’s going on,” Anderson said. “We’re just missing shots. Let’s just get back in there and start making some shots. We’re getting the ball where it needs to be, so let’s start sinking some of them.”

Beatty was held scoreless during the second quarter after trailing by just four after the first, with Kyleigh King netting all of her 4 points during the opening period. But after that, things got kind of ugly, with the Muckers cutting in front of some lazy passes around the perimeter and the Hornets failing to come close to the bucket when they did get off shots. As a result, a 10-6 Tonopah lead stretched to 20-6 at halftime.

The Hornets found a little life on offense during the third quarter, netting 10 points as Montana King tallied 6 points and Carmen Stephenson added 4. Anderson said Montana King was an example of what the Beatty coaches are trying to accomplish before league play starts.

“Montana had never done what she was doing today, and she started to shine, and it was nice,” he said. “Being able to get them into things they’ve never done before and get that experience, that’s what these tournaments are for.”

Tonopah pulled away late, outscoring the Hornets 18-3 during the fourth quarter to finish off the 48-19 win. But as soon as the schools’ boys teams finished their game, Beatty’s girls were right back on the court to face the host Knights.

“That second game, they were just tired,” Anderson said. “I could see it in their faces. They were tired, they were hungry. You lose a step when you play back-to-back games.

“We want them to be in a setting where it’s very hard and they’re having to battle with their brain. Their bodies can do it, they just need their brains to tell them to. In that sense, being pushed and staying in for two solid games, that’s a good thing.”

The Hornets actually fared better on the offensive end against Round Mountain than they had against Tonopah, especially early, and when Joselyn Hernandez banked in a put-back with 6 seconds left in the first quarter, the Hornets held an 8-7 lead.

It would not last. Much like in the first game, the second quarter proved decisive for the Hornets, as the Knights took a 16-10 lead into halftime. Stephenson and Montana King each scored 7 points during the second half, but Round Mountain wore down the Hornets inside.

The Knights scored most of their 16 fourth-quarter points down low, on put-backs, layups and free throws after the ball went inside. Despite 9 points from Stephenson, 7 points from Montana King and 6 points from Kyleigh King, the Hornets wound up on the short end of a 42-28 decision.

Anderson remained upbeat about the Hornets, who will open Class 1A Southern League play Jan. 7 at home against Word of Life.

“All of our returning players — Carmen Stephenson is playing great, Kyleigh King is playing great, Marlene Damien is playing great,” he said. “They really are, and the young girls are doing really well, but they’re just learning how we play together in a high school setting. But I’m super-proud of them. They worked hard.”

Aside from a home-and-home with Tonopah, each of the Hornets’ remaining games are 1A Southern games, including two the first full week of 2020. After hosting Word of Life on Jan. 7, the Hornets will travel to Indian Springs for a Friday afternoon game Jan. 10.

Pahrump Valley raced to a 20-3 lead after one quarter and coasted to its 12th win in 13 games. The Trojans will be back in action Friday against Corona Del Mar of Newport Beach, California, during the Gator Winter Classic at Green Valley High School in Henderson. They also will meet Silverado in pool play.