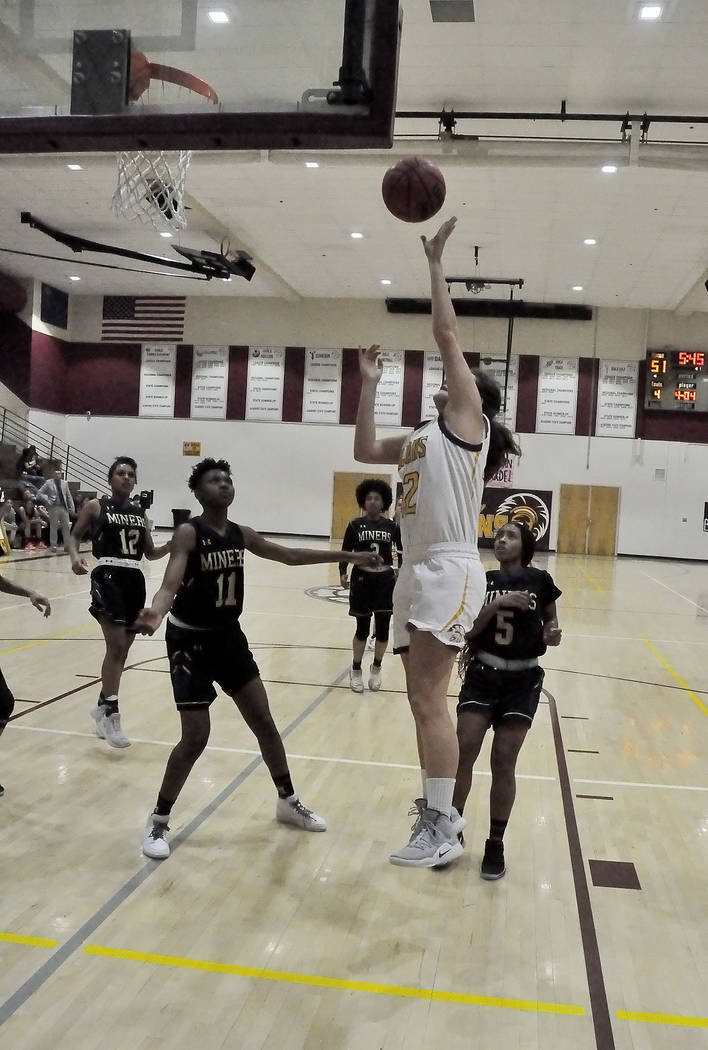 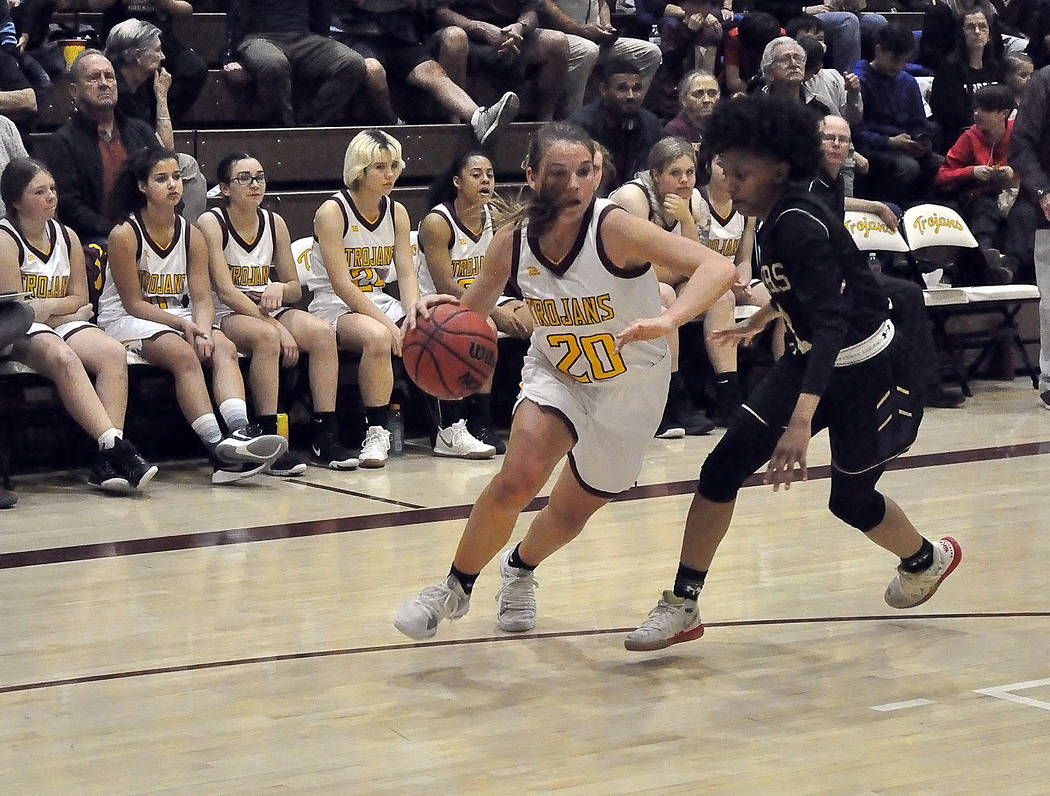 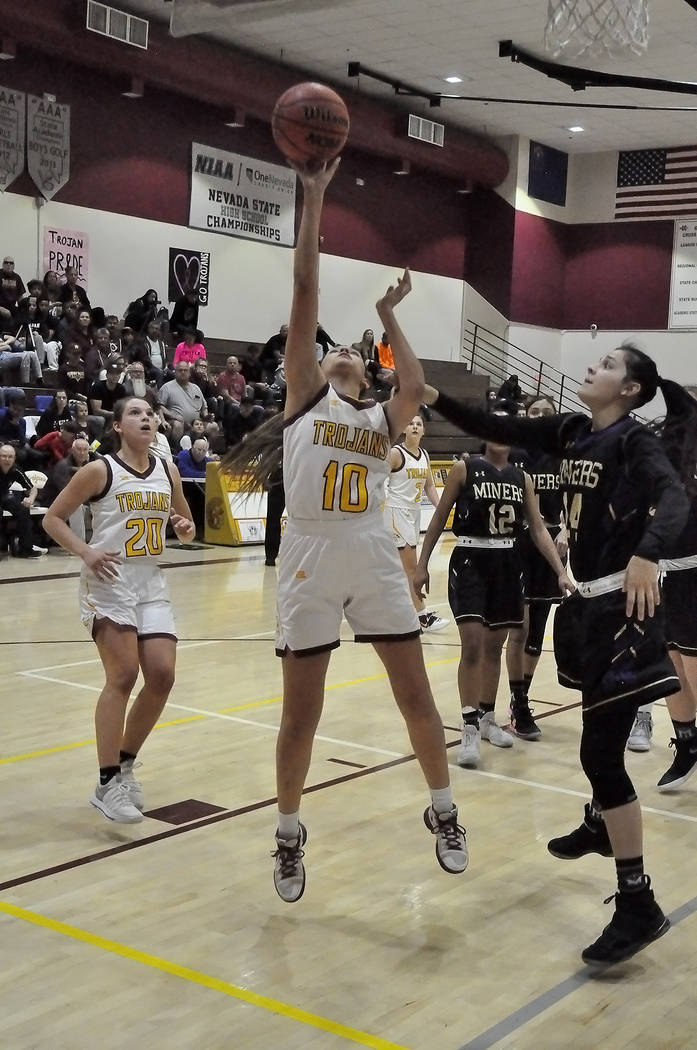 Bob Hopkins had reason to be nervous heading into the Class 3A Southern Region Tournament opener Tuesday night against Sunrise Mountain.

“Since December, we’ve only really had one game, so that’s probably the biggest thing I was nervous about,” Hopkins said, referring to the lack of quality opponents in the Sunset League, as opposed to the more competitive Sunrise. “On the other side, it didn’t make any difference who was the 1, 2, 3 or 4 (seed); they’re all pretty even.”

When the Miners started out playing the kind of defense the Trojans employ themselves, there was reason to worry. It took several possessions for anybody to get on the scoreboard, and it looked as if the Trojans might be in for a long night.

And it looked that way for all of four minutes.

Junior Nicky Velazquez’s layup at the 4:05 of the first quarter started Pahrump Valley on a 15-0 run that started the Trojans on their way to a 57-31 win over the Miners in the region quarterfinals at Pahrump Valley High School.

The Trojans are not used to being behind, so even a 4-3 Sunrise Mountain lead in the opening minutes was an unusual occurrence for them.

“Early in the game, I don’t know whether we were nervous, tight or whatever, but we turned the ball over I think seven times in the first three and a half minutes,” Hopkins said. “Once we took care of that, we started pulling away.”

After the opening four minutes, the game went pretty much the way games go for the Trojans, if not by as wide of a margin as they pile up in Sunset League games. In fact, the 26-point final margin was the closest of any of Tuesday’s region playoff games, as Pahrump Valley was the only Sunset team to advance.

Nevertheless, they were in control from the time they took that 5-4 lead until the final horn. Beating a team with an overall winning record was a good way for the Trojans to start the season.

“It does give us confidence,” said Velazquez, who finished with 11 points — shooting 5 of 7 from the floor — and 6 rebounds. “We’ve worked really hard for this, so I think we deserve it as a team.”

While the Trojans are known for their team play on defense, the stat sheet showed a strong effort on team offense as well, as they accumulated more assists (23) than turnovers (21). Junior Maddy Souza racked up 10 assists, many of them on passes down low to junior Kate Daffer, who had one of her most efficient games around the basket.

“We just work hard, and it just works out, I guess,” said Daffer after a 24-point, 11-rebound performance that included shooting 11 of 20 from the floor.

The Miners never quit, but they simply could not match the intensity of the Trojans after the opening minutes.

“I think the difference is them not working as hard,” Daffer said. “You could tell they were jogging down the court, not sprinting as hard as they could.”

Even so, to Hopkins, the game on the floor seemed a lot more competitive than it was on the scoreboard.

Perhaps that was part of the reason Hopkins left his starters in longer than usual, despite the fact the Trojans led by 18 at halftime and by 25 after three quarters. He cleared the bench with 4:08 left in the game.

“I could have probably pulled them earlier, but I get nervous, with the 3-point shot, and the way they kind of kept the pressure on us the whole game,” he said.

Sunrise Mountain (15-9) had some legitimate offensive threats, at least on paper, and the Trojans were prepared for them.

“We schemed how we wanted to play (Markaila) McCurdy and (Aiyana) Ramirez,” Hopkins said. “I thought they were going to start 1 (Cheryl Edenfield), 12 (Ramirez) and 2 (Donnell Morris), and we were going to have Kate guard McCurdy, because she would be inside. But they went with two post players. Makayla (Gent) is outsized there, but she does a great job on them.”

While Ramirez led the Miners with 11 points and McCurdy finished with 8, the other starting post player, Alexia Miranda, was held scoreless. And Daffer hinted that starting two post players wasn’t going to do the Miners any good.

“We knew ahead of time that the posts they had weren’t very strong, so he knew that our posts could dominate their posts,” she said.

“We knew they had two really great girls, and we got ready for them,” Velazquez said. “Our coaches planned for what we were going up against.”

Souza did a lot of everything. In addition to the 10 assists, she finished with 10 points, 8 rebounds and 8 steals. Gent added 5 assists, 3 rebounds and 3 steals as the Trojans improved to 29-2.

The regional semifinals were played Thursday at Pahrump Valley High School, with Moapa Valley — the only Nevada team to defeat the Trojans this season — meeting Boulder City in the afternoon and Pahrump Valley playing Virgin Valley in the evening. The winners, who each will earn a berth in the Class 3A State Tournament, will advance to Saturday’s 4 p.m. region final, also in Pahrump.

Nobody initially would indicate a preference for an opponent in the final, should the Trojans beat the Bulldogs. But when pressed, Daffer admitted otherwise.

“I don’t care,” she started, “but I hope we play Moapa and beat them.”