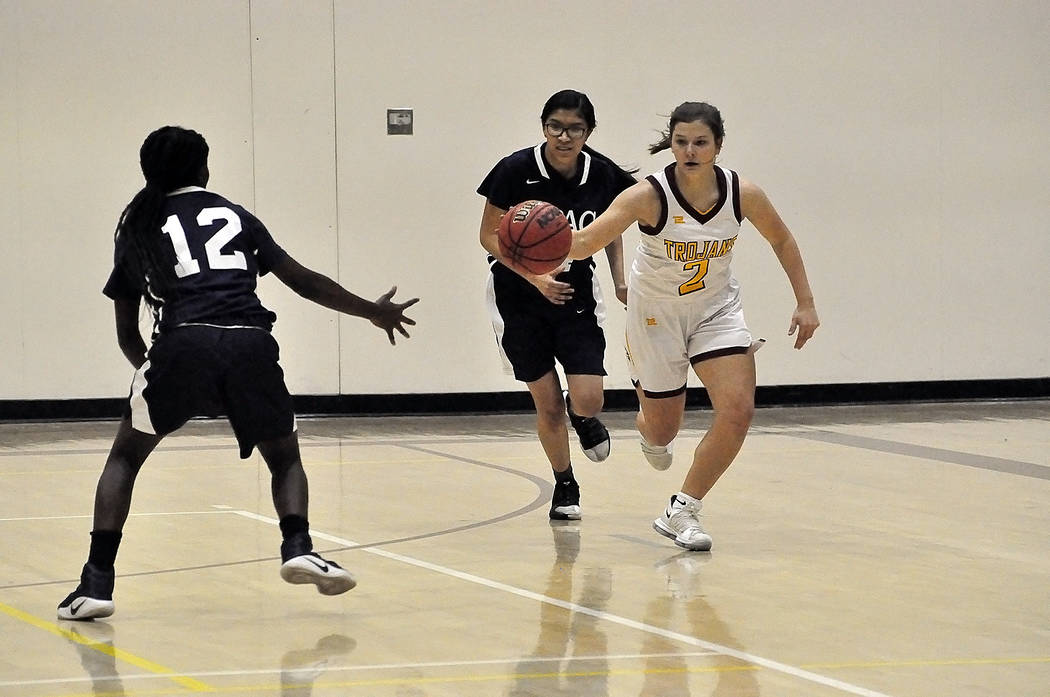 Horace Langford Jr./Pahrump Valley Times Sophomore guard Tayla Wombaker brings the ball up the floor during Monday night's game against Democracy Prep in Pahrump, a 60-7 rout for the Trojans. 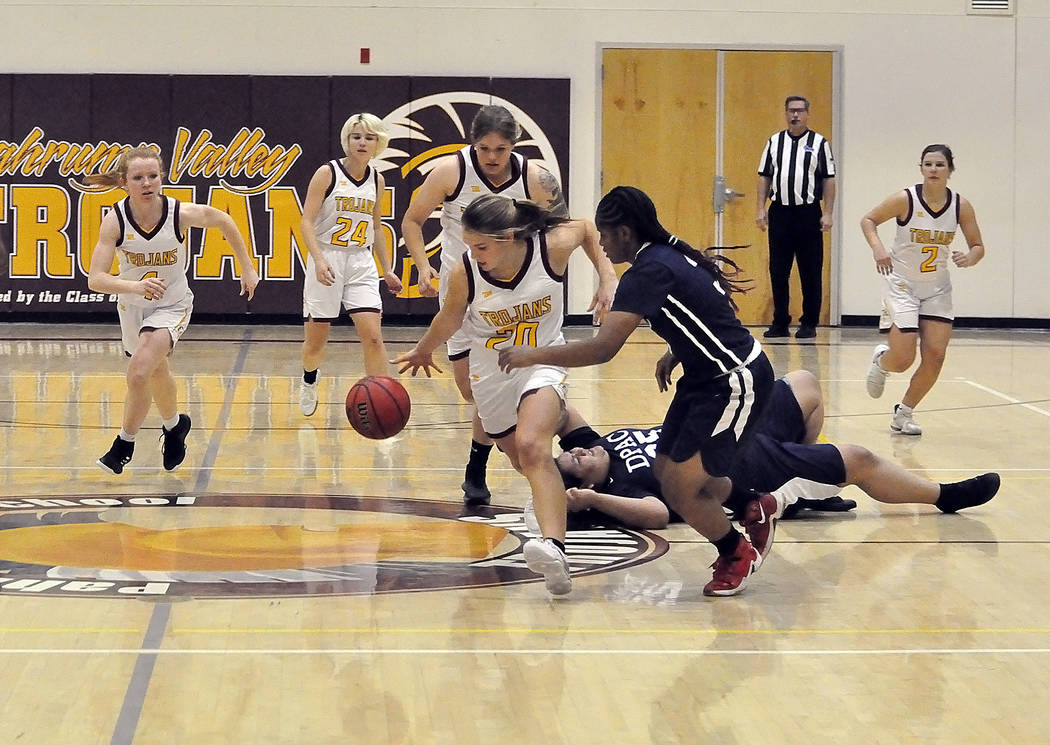 Horace Langford Jr./Pahrump Valley Times Pahrump Valley's Maddy Souza starts a fast break after a steal during the Trojans' 60-7 romp over Democracy Prep on Monday night in Pahrump. The Trojans stand 18-2, 4-0 in the Sunset League. 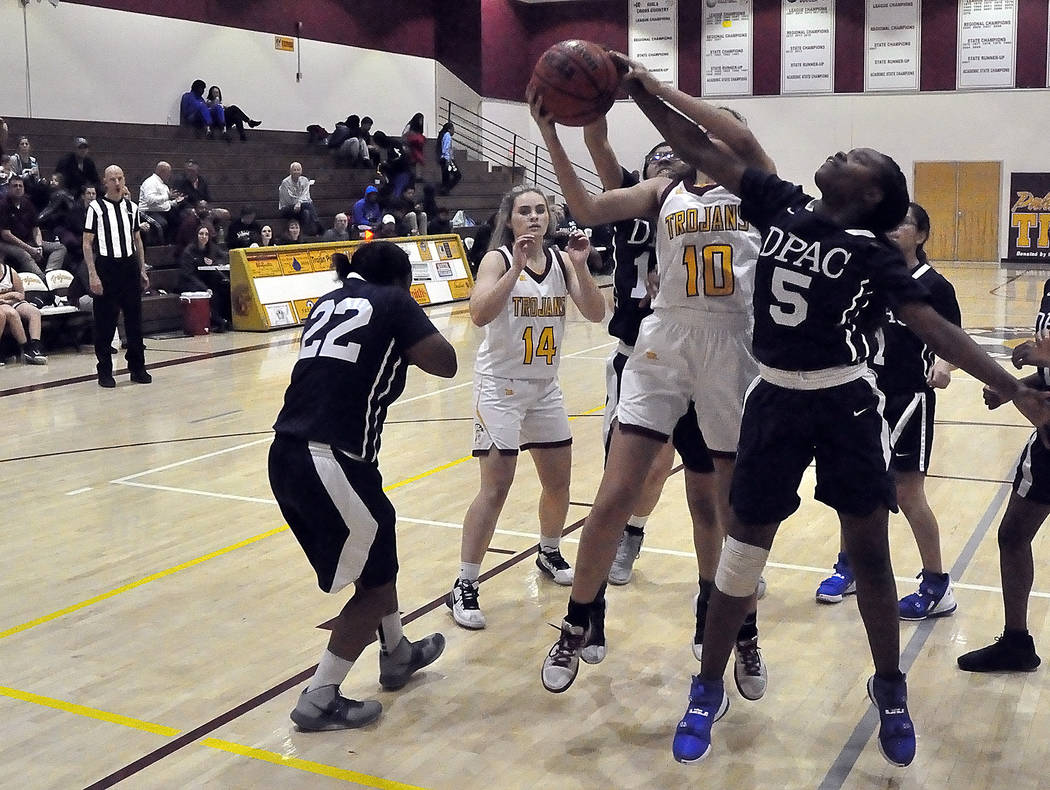 This was supposed to be a story about Monday night’s girls basketball game between Pahrump Valley High School and Democracy Prep Agassi Campus.

That was the score after the Trojans carved a path of destruction through the Blue Knights. Maybe it wasn’t the Germans tearing through Poland in 1939, but it was close. Throw in a few tanks and it would have been very close.

Hopkins’ teams play strong defense. Nothing new there. But the level of defense this group of players rises to on a routine basis borders on the unfair.

A year ago, the Trojans went 20-14, allowing 32.6 points per game. That’s a sieve compared to the incredibly stingy 23.8 points per game they are allowing this season. The 7 points scored by Democracy Prep on Monday night was the second time the Trojans held a team to single digits, and there have been nine games this season in which the opponent failed to reach 20 points.

Now, Hopkins will be the first to tell you there have been a lot of weak teams on the Pahrump Valley schedule. But this level of dominance against that schedule remains impressive.

Then there is the performance on the other end of the floor. An offense scoring at 45.35 points per game might not sound all that impressive, but it’s almost 8 points per game more than last year. Even with no defensive improvement, that statistic would have brought a few extra wins.

Monday night’s game was perhaps an extreme example, as the Blue Knights are 2-8 this season, but it was typical in one way: sophomore Tayla Wombaker and junior Kate Daffer led the way for the Trojans. The fact that the two top players on the team are much improved over last year goes a long way toward explaining the uptick on offense.

Daffer’s numbers were 8.1 points and 6.6 rebounds per game a year ago, both team-leading figures. This year those numbers are 9.4 points and 7.2 rebounds, with 2.1 steals per game thrown in for good measure. On Monday, Daffer scored 14 of Pahrump Valley’s 60 points.

Wombaker’s improvement has been even more dramatic. Her 22 points against the Blue Knights marked the 14th time this season she has scored in double figures and the second time she has topped 20. She is averaging 10.8 points, 3.7 steals and 2.5 assists per game, and many of her steals have led to easy baskets.

Last year she was in double figures just five times, and most of that came late after she broke into the starting lineup about a month into her freshman year.

Nobody is going to jump up and down because they beat Democracy Prep, but Wombaker’s season high of 26 points came against Class 4A Silverado (6-9). That game also was one of two double-doubles for Daffer, who has come within one rebound of three more this season.

But while Wombaker and Daffer are the top players, this is not a two-person team. It’s just that several other players are capable of making significant contributions. Junior Nicky Velazquez is the team’s best shooter, connecting on 48 percent of her shots from the floor and — among players who have taken more than 10 free throws — leads the team in that department as well, shooting 64 percent.

Junior Maddy Souza leads the team in assists, with almost 3 per game. (The Trojans are shooting 36 percent as a team, which keeps assists numbers down.) Souza is also second on the team in steals with 66, just 4 behind Wombaker, and nine Trojans have at least 10 steals this year.

One thing the Trojans don’t do much of is block shots. Daffer has 12, and the entire rest of the team has 4. That led to a bit of humor during the Gator Winter Classic in December, as Hopkins reacted to a player getting called for a foul after going up late to attempt to block a shot.

“How many blocks do we have all year? Three?” Hopkins bellowed, and he wasn’t far off if not for Daffer.

All of this adds up to an 18-2 record, 4-0 in the Sunset League. In league games, the Trojans have allowed just 54 points in beating Valley (52-17), Somerset-Losee (53-15) and Del Sol (49-16) before the Democracy Prep game. Considering Valley is 3-1 in the league, the Trojans don’t seem to have much competition in claiming their third consecutive league title.

Beyond that, there could be a bit more trouble. One of the two losses came against Moapa Valley (12-4, 4-0 Sunrise), the team that ended their season a year ago, and they will not see Boulder City (10-5, 3-0 Sunrise) before the postseason. But nobody else in the Sunrise looks particularly strong this season, and the Trojans rolled past a Virgin Valley team currently tied for third in the league.

Pahrump Valley has not made it to the state tournament since 2008, when they won 25 games. Last season was the first time they had reached 20 wins since that year, and the win over Democracy Prep gave them 18.

Not snapping that state tournament drought would be a major disappointment for this group.