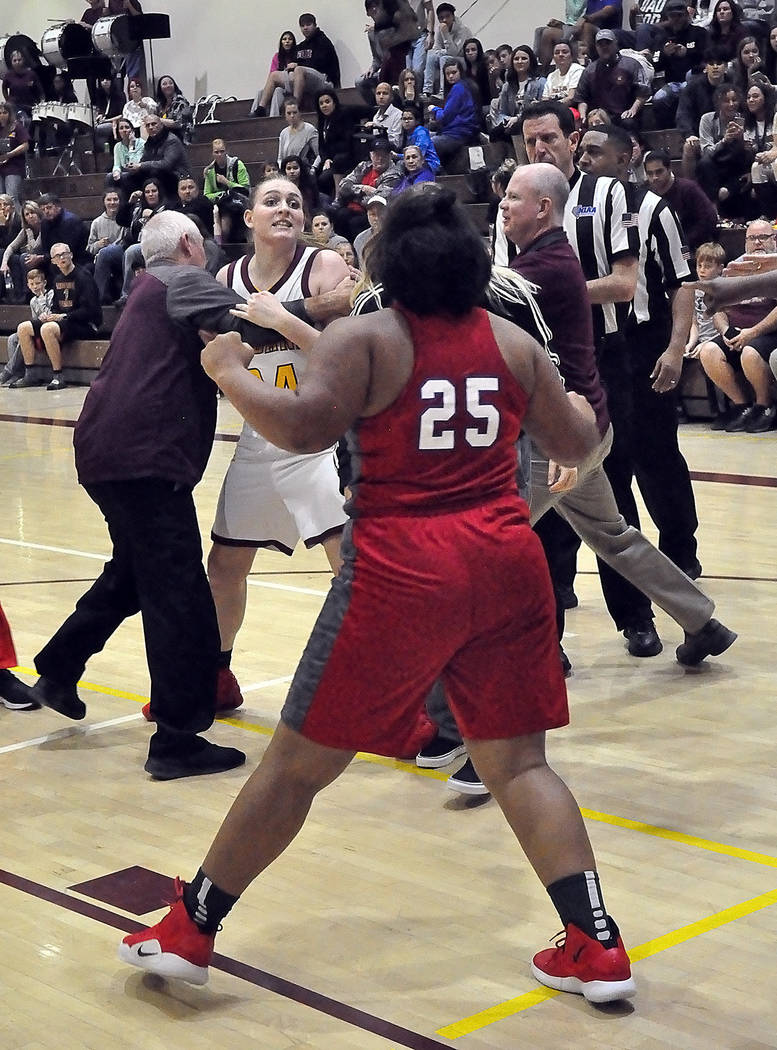 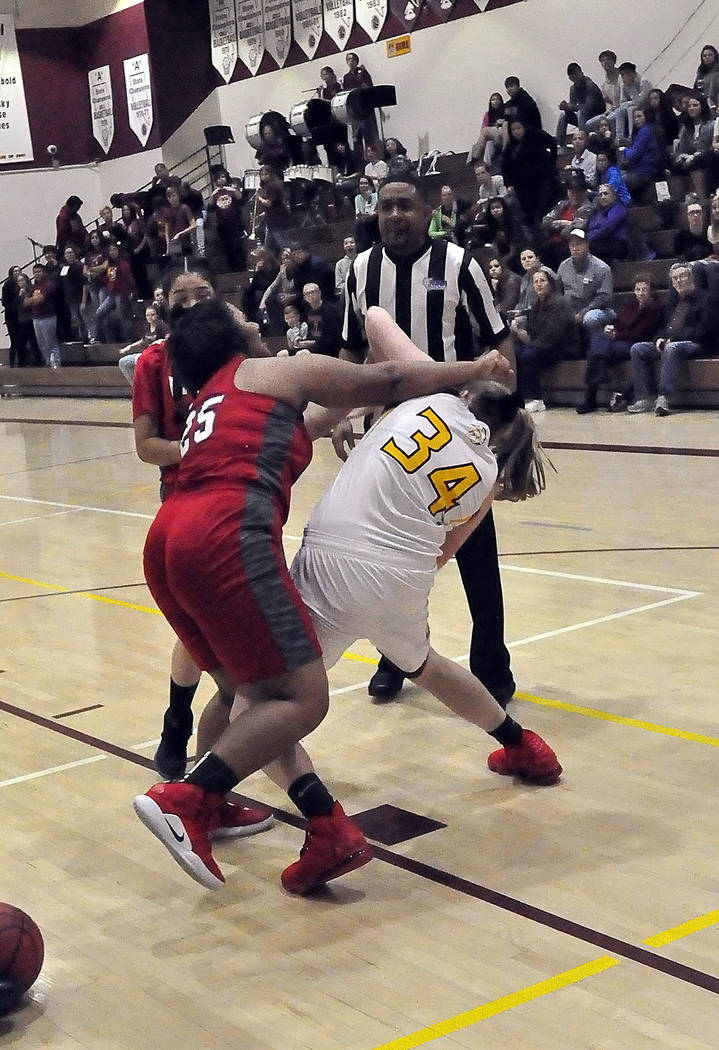 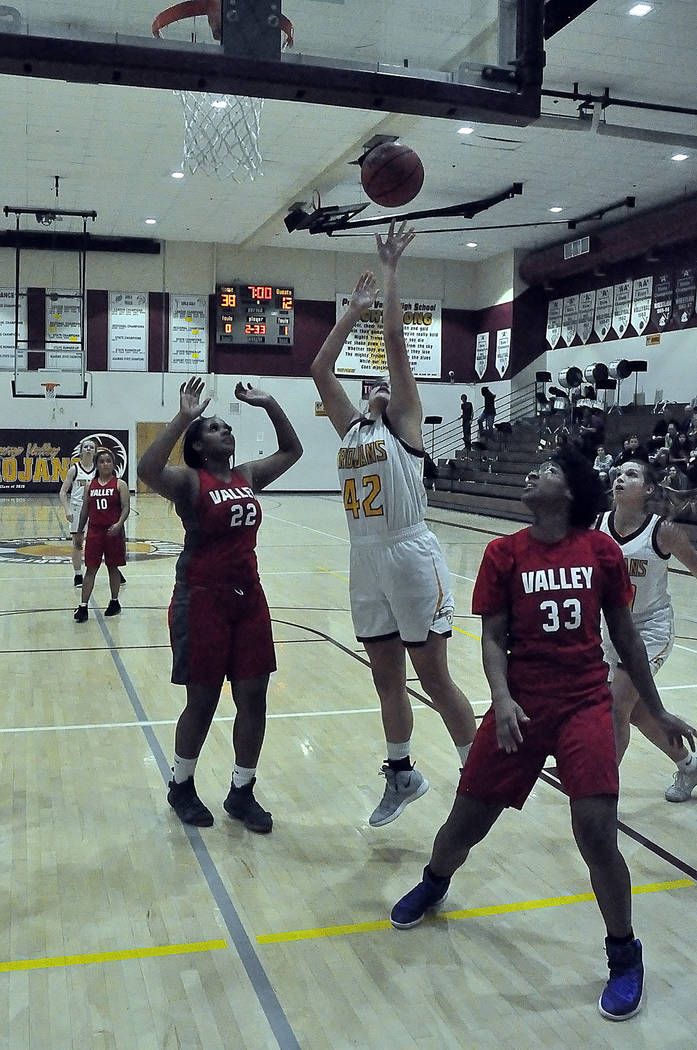 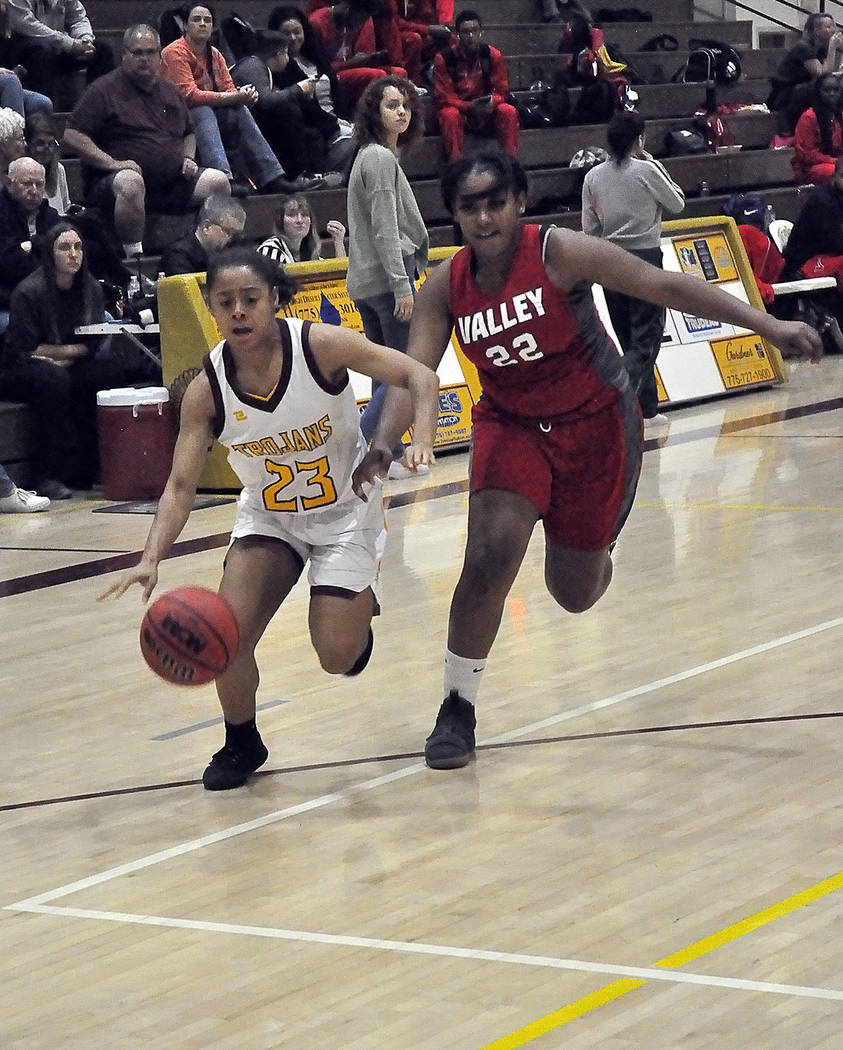 The Trojans were not a good shooting team, but they won 20 games and captured the Sunset League title with a 9-1 record with suffocating defense, allowing 32.6 points per game.

As hard as it might to be to believe, that defense is even better this year.

That was on display Monday night in the Sunset League opener at home against Valley, as the Vikings were hopelessly outmanned in a 54-17 rout in Pahrump.

Valley was held scoreless in the first quarter, scored 3 points in the third and 2 points in the fourth. And the 12 points they managed to score during the second quarter came mostly from the line, where the Vikings connected on 8 of 14 free throws.

Unfortunately for the visitors, that also was the best scoring quarter for the Trojans, who poured in 22 points, 7 points apiece from Tayla Wombaker and Kylie Stritenberger and 6 from Kate Daffer, to take a 33-12 lead at the half.

The defense was a continuation of what the Trojans did during the season-opening River Valley Shootout, in which they outscored their seven opponents 307-129.

“We just shut down people defensively,” Pahrump Valley coach Bob Hopkins said. “We had a couple of games where we got up and quit pressing and just played good half-court defense.”

The bad news is that another reason — aside from the insurmountable lead — to stop the press was that the Trojans were pretty bad about converting steals and turnovers off of the press into points and seemed to function better in the halfcourt. That again was the case against Valley.

“We were 11 for 36 on basically layups in the first half,” Hopkins said. “I told them we’re not going to press any more, we’re just going to try and score out of the half-court offense. We did a way better job in the second half.”

The slower pace kept the scoring down, as Hopkins was hoping to avoid the running clock.

“I didn’t want to get to 35 points,” said Hopkins, referring to the margin that triggers the running clock. “We had a few breakaways we didn’t take. I try to keep it below 35 because then your kids don’t get to play.”

Before the clock finally kicked in on a layup by Maddy Souza on a nice feed from Wombaker midway through the fourth quarter, 11 Trojans saw playing time and 10 took shots. Hopkins’ defense — at least until he takes off the press — requires fresh bodies, and last season 12 Trojans averaged at least 10 minutes per game. With eight of them back, including the three who saw the most minutes, Hopkins figures the reason for the improved defense is simple.

That didn’t make much difference to the Vikings, who scored 32 points in two lopsided losses to the Trojans a year ago. Wombaker scored 6 points as Pahrump Valley took an 11-0 lead after one quarter, and the outcome was never in doubt.

But the Trojans can be even better, and a quick look at the stat sheet shows why. Their 31 steals went a long way toward masking their 21 turnovers, and they shot just 32 percent from the floor and 56 percent from the line.

The effectiveness of the Pahrump Valley press limited the number of shots Valley took, and combined with the Trojans’ poor shooting created a situation in which the Trojans grabbed more offensive rebounds (15) than defensive rebounds (11). Daffer led the way with 6 rebounds, with Makayla Gent and Kylie Stritenberger each grabbing 4 rebounds.

Next up for the Trojans is the annual trip to Mesquite for the Bulldog Invitational hosted by Virgin Valley. The competition there figures to be tougher.

“They’ve got some confidence, and we’ll see how we do at Virgin Valley this weekend,” Hopkins said. “We play Dixie out of Utah, they won it last year and we won it the year before. We play them the first game, then we play the winner of Enterprise (Utah) and Moapa.”

The Trojans will roll into Mesquite with an unblemished record; if they come back the same way, it will be time for the rest of Class 3A to take notice.

“I’m pretty happy with how we’re playing,” Hopkins said. “Offensively, I wish it was better, but it’s getting there.”

Pahrump Valley 53, Somerset Losee 15: On Wednesday night, the Trojans made it 2-0 in the Sunset League and nine consecutive victories overall by crushing the Lions in North Las Vegas.