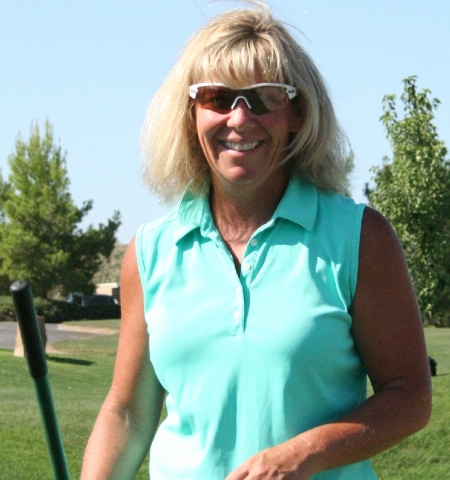 Over the summer she was inducted to the Pahrump Valley High School Hall of Fame for her championship teams. From 2005 to 2007 her teams won three state titles.

Floyd believes her young team will do well this year.

She said there were a few eighth graders like Riley Moore and maybe Shay Neth who could be joining the team. Floyd will not be able to say for sure until she sees the sign-up sheet.

Floyd does know she has two solid players in junior Jayde Woodworth and sophomore Natalie King.

These two golfers hit the courses in Pahrump during the summer to get ready for fall.

“Natalie has a good chance of making state. Natalie has a lot of talent, I feel. Jayde made it last year, too. I think I will have at least three of four that will qualify for state this year,” Floyd said.

Over the summer some of her girls even played in a few junior golf tournaments. Floyd explained to be a good golfer you have to take advantage of things like junior golf.

“I had a few play in the junior golf tournaments but not a ton. It seems like it is always that way. The summer is hard, there is only five or six tournaments and if you are gone in July that is when most of the tournaments are.

Floyd believes her biggest competition will come from last year’s state champions, Faith Lutheran. Faith has one other state title from 2004. Their team from last year was mainly juniors and seniors.

“Faith always has girls that can shoot par or several under par,” Floyd said. “He has junior Julia Becker coming back. He has a good team coming back again. He has got it coming out of the woodwork.”

Floyd said the bad economy took away many of her good golfers.

“When we moved up to 4-A that is when the bad economy hit and all my golfers moved out of town,” she said. “The economy took a big toll on athletes, especially for me. Families lost their businesses in Pahrump and had to move.”

“Golf is unique. You need to work at it. You can be a good basketball player with natural talent. With golf, you need to work, work, work and you get better every year. I think it takes more dedication than any other sport there is.

“The good golfers I have had on the golf team do not need to be called up and told they need to practice. They are out there every day, or they are getting lessons or they are chipping every day for an hour or they are putting. My two best golfers that went through PVHS that is what they did. They worked on their game every day,” she said.

The coach said she is still putting the finishing touches on the schedule.

“We have a couple of weeks,” Floyd said. “I am trying to pick up one match for Sept. 16-20. I am looking to go to Boulder City that day. We are also looking to go to Mesquite the first week of September to play Virgin Valley.”