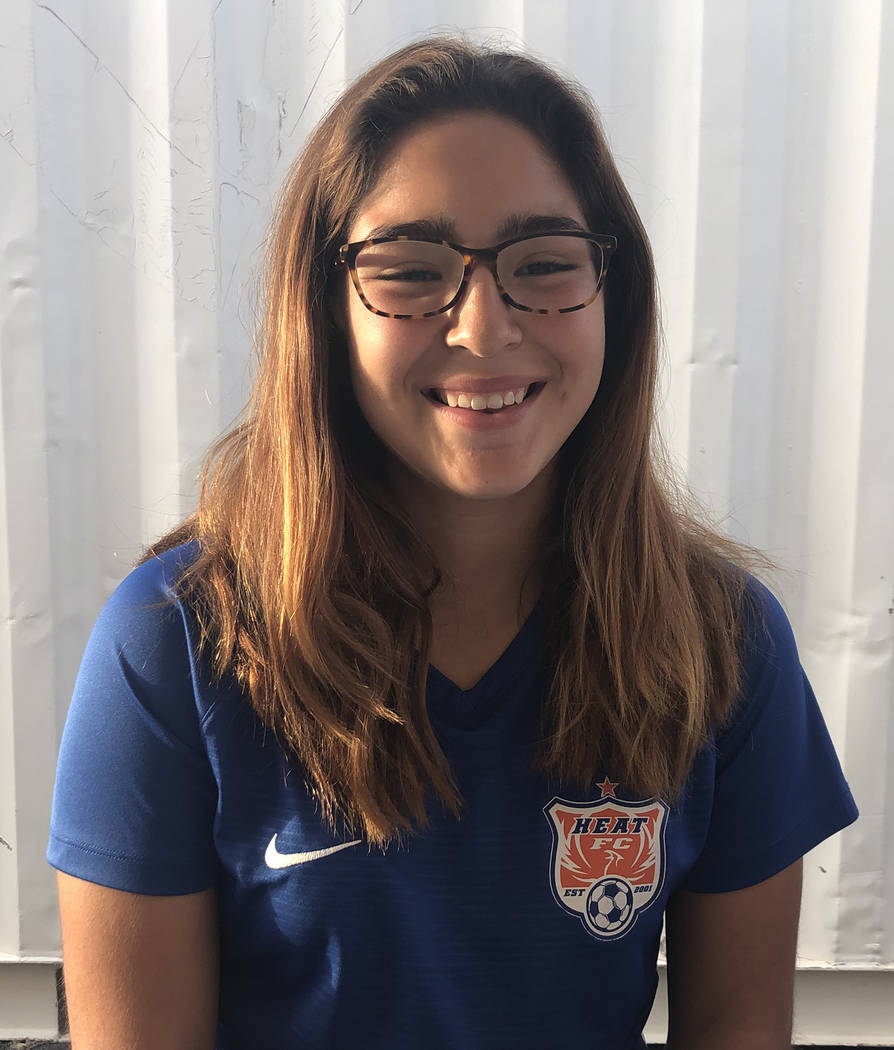 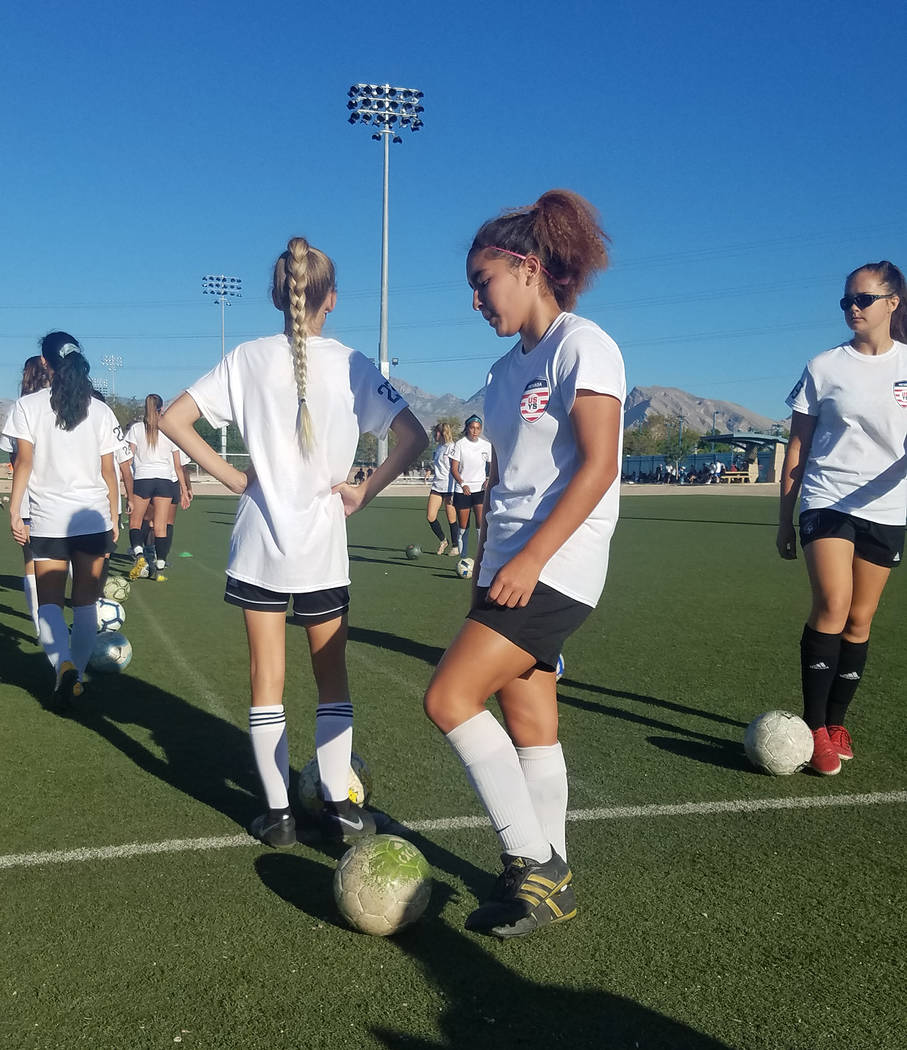 Danny Coleman/Special to the Pahrump Valley Times Paris Coleman, an eighth-grader at Rosemary Clarke Middle School, warms up before a tryout for the Olympic Development Program in Las Vegas. 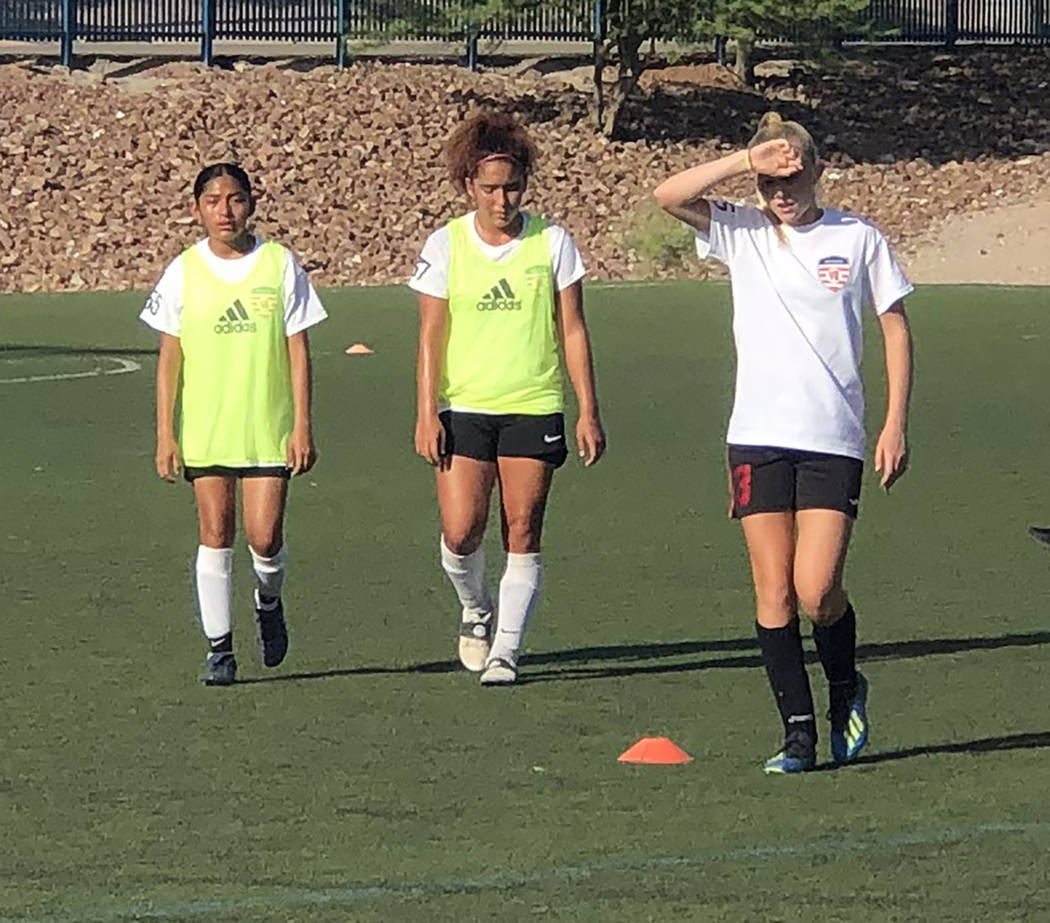 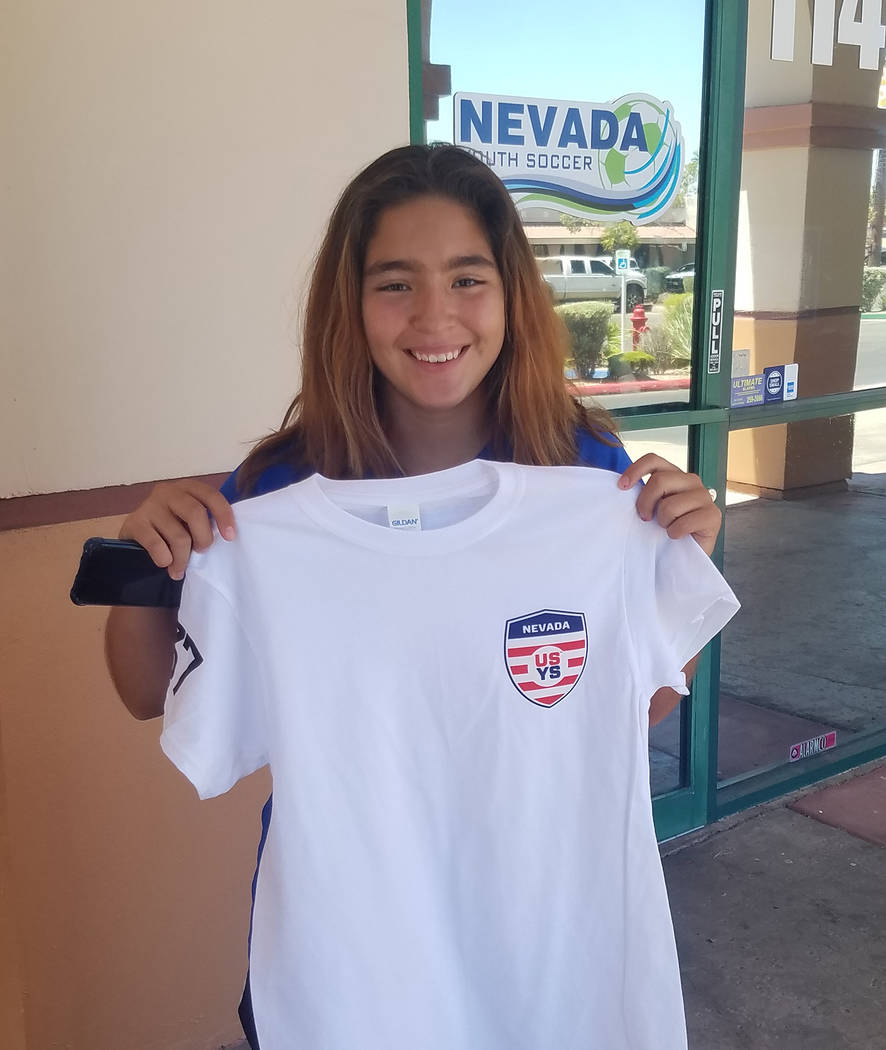 Danny Coleman/Special to the Pahrump Valley Times Pahrump resident Paris Coleman has been selected to play for the Olympic Development Program girls soccer travel team which will begin play in December.

Paris Coleman’s soccer career is going places, and definitely sooner rather than later.

“I thought I did really good at the first tryouts,” Coleman said. “The coaches were looking at me a lot because I was talking a lot, so I thought I stood out.”

Coleman does talk a good game, but her play on the field does most of the talking for her. From the very beginning, she wanted to be the best defensive player possible, which made her stand out right away.

“Everyone wanted to score as much as they could, but I wanted to stop them from scoring,” said Coleman, who started playing soccer when she was 4 years old. “That was my goal.”

The desire of most players to be noticed for scoring goals doesn’t end at that age, either.

“I think the coaches saw that I was a strong defender because there weren’t many of those,” she said. “Everyone wants to be offensive players, but my goal is to be the best defensive player I can be.”

Her father, Danny Coleman, said her aptitude for the game showed at an early age. The elder Coleman coached his daughter when she played with the Pahrump Valley affiliate of the American Youth Soccer Organization.

“Her older brother Tristan played, and she would always go to his practices and kick the ball around,” Danny Coleman recalled. “When she was old enough to play, she had speed and she had size and so she was able to get through girls her own age. No matter who else I had, I could basically revolve the team around her and always do very well.

“When I started coaching the AYSO all-stars when she was 10, then I could see she was good, not just for Pahrump but for other local teams, Summerlin, Bullhead, and then we’d play California teams and she was still standing out.”

But ODP seriously was on her mind after she joined a soccer club in Las Vegas 14 months ago.

“I was really starting to think about it last year when I first joined Heat FC, because so many new opportunities were opening up just from joining that one team,” she said. “I became more of a tactical player, more thinking about my touches and my moves than just straight speed and power. I’m fast and I’m powerful, so I can just get through people, but the older you get the more skills you need to have to advance.”

And playing for Heat FC 05 coach Sergio Rodriguez is helping make that happen.

“Her Heat coach is putting a lot of emphasis on her not just being good, but being better,” Danny Coleman said. “He’s not satisfied with good, he wants her to be at the elite level. Her goal trying out for this team was to make it, but her next goal was to be captain. She shows her leadership skills at practices, but there are a lot of good players on that team, so you never know.

And Paris Coleman is just fine with higher expectations being placed on her.

“It motivates me to be better,” she said. “When I first joined the team and he actually saw what I could do, he kept pushing me to be the best player I can be. He has me stay afterwards because he wants me to work on my touches and my finishing. I stay for as long as four hours after and before practice to do extra training with him.”

All that time means something has to give, and the days of Coleman playing four sports are over. Scheduling will keep her from some things, but there is one other sport she expects to participate in when she gets to Pahrump Valley High School.

“She can do track in high school,” Danny Coleman said. “She can work on her discus. Her throws in middle school would have qualified her for state in high school.”

Paris Coleman’s personal best in the discus was 81 feet during a meet at Faith Lutheran. She also competed in the 400 and 800 meters, three relays and the shot put last year.

But soccer comes first with her, and her desire to continue to improve makes her fit in well with Heat FC.

Coleman said 24 players made the ODP pool play team, and 18 of them made the travel team. The team will begin play in mid-December, and she already is familiar with some of her teammates.

“I know a few of them from different teams just because I’ve played with them since I was around 10,” she said. “And I’ve played against some of them in other sports.”

Each year there is a new team selected, but Coleman said a strong showing with this team could get her looked at for the regional team, which travels more extensively and plays teams from other countries. For now, her travel schedule will not be quite so extensive.

“We travel to Phoenix, Arizona and Mesquite, and I’m not quite sure where else we travel to,” she said.