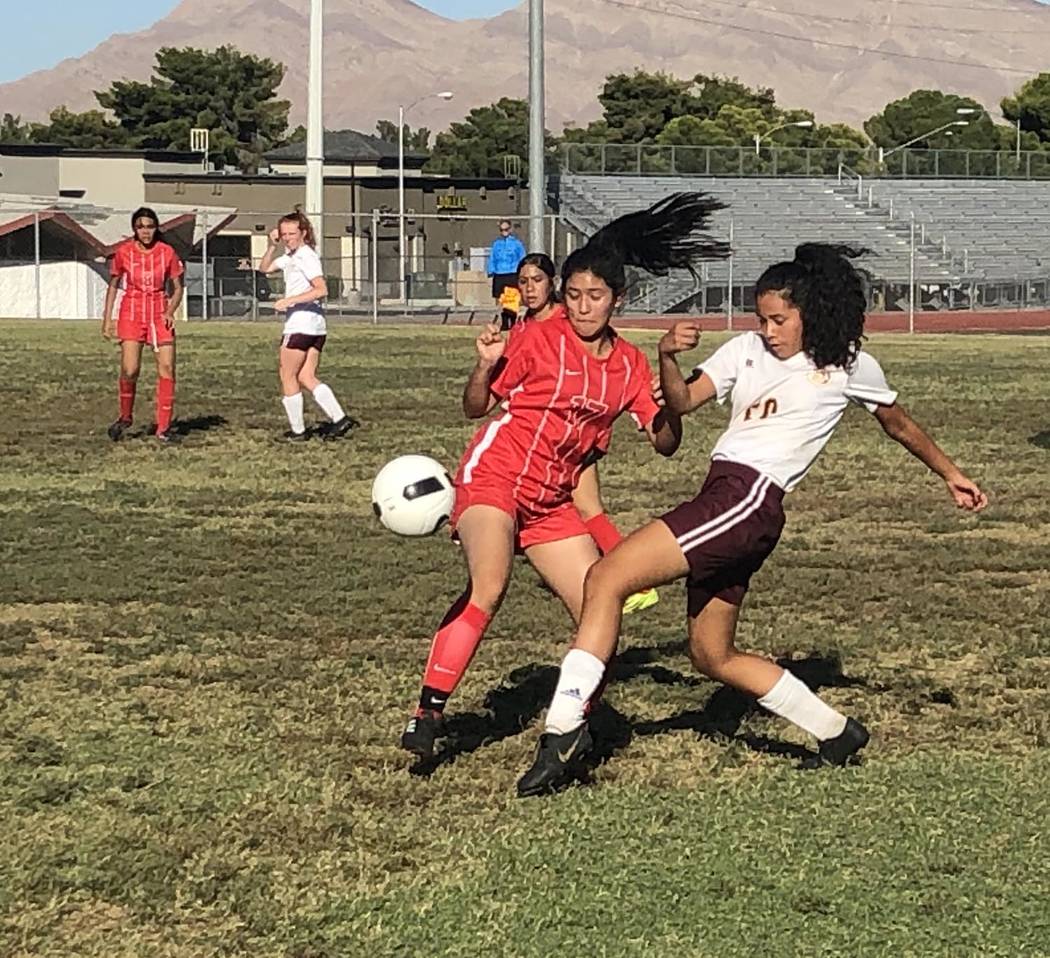 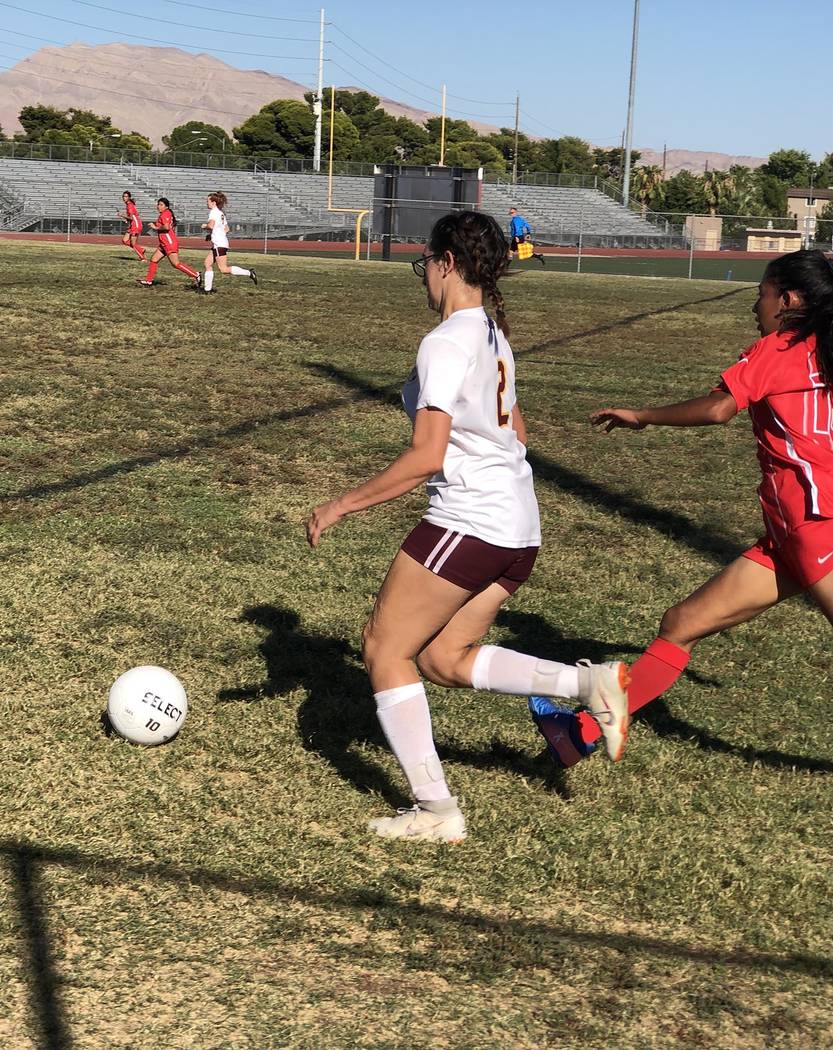 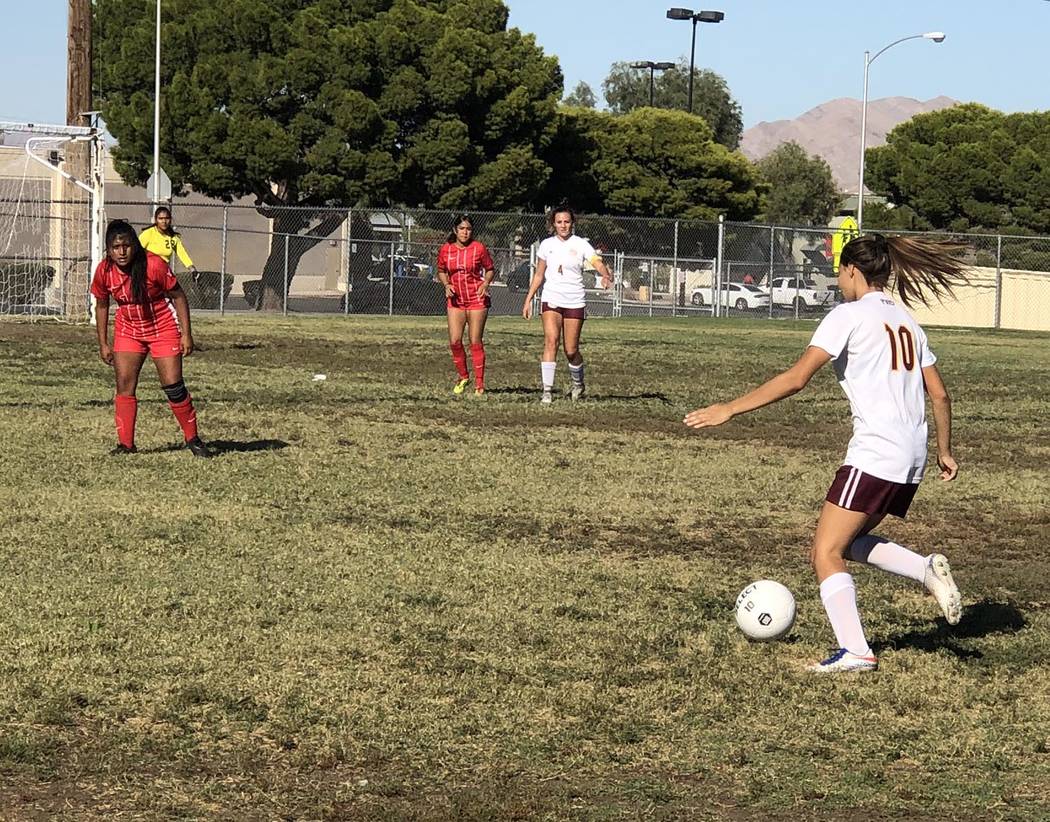 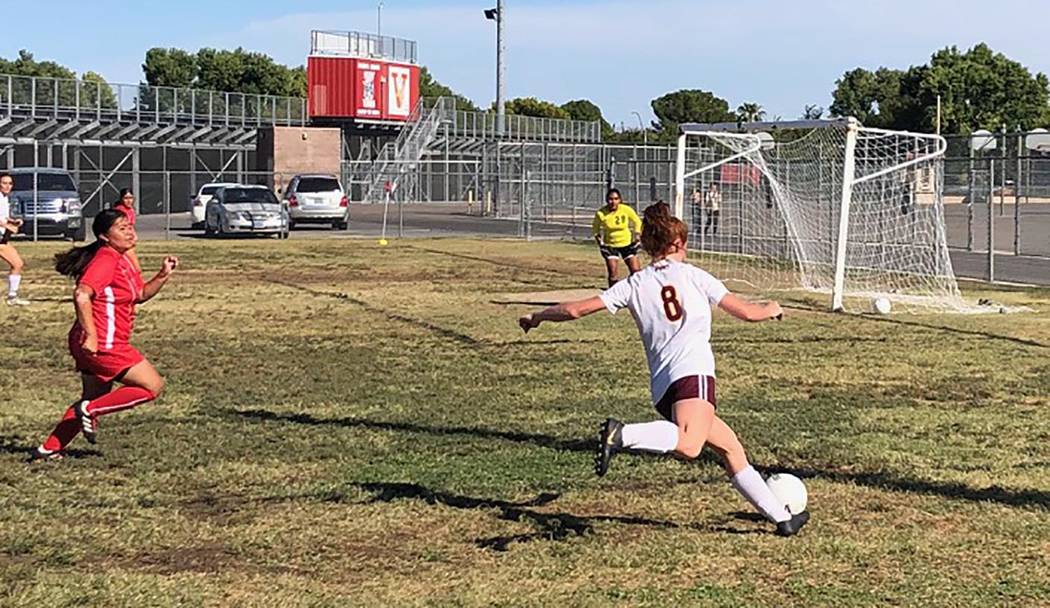 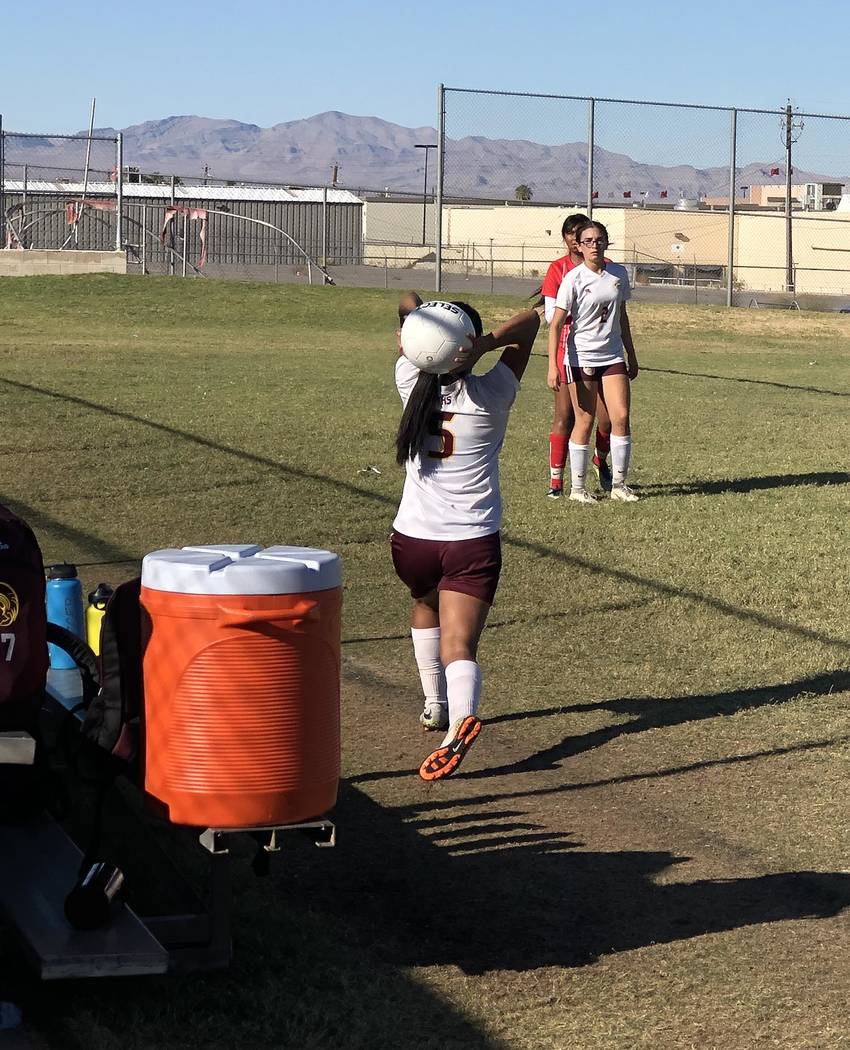 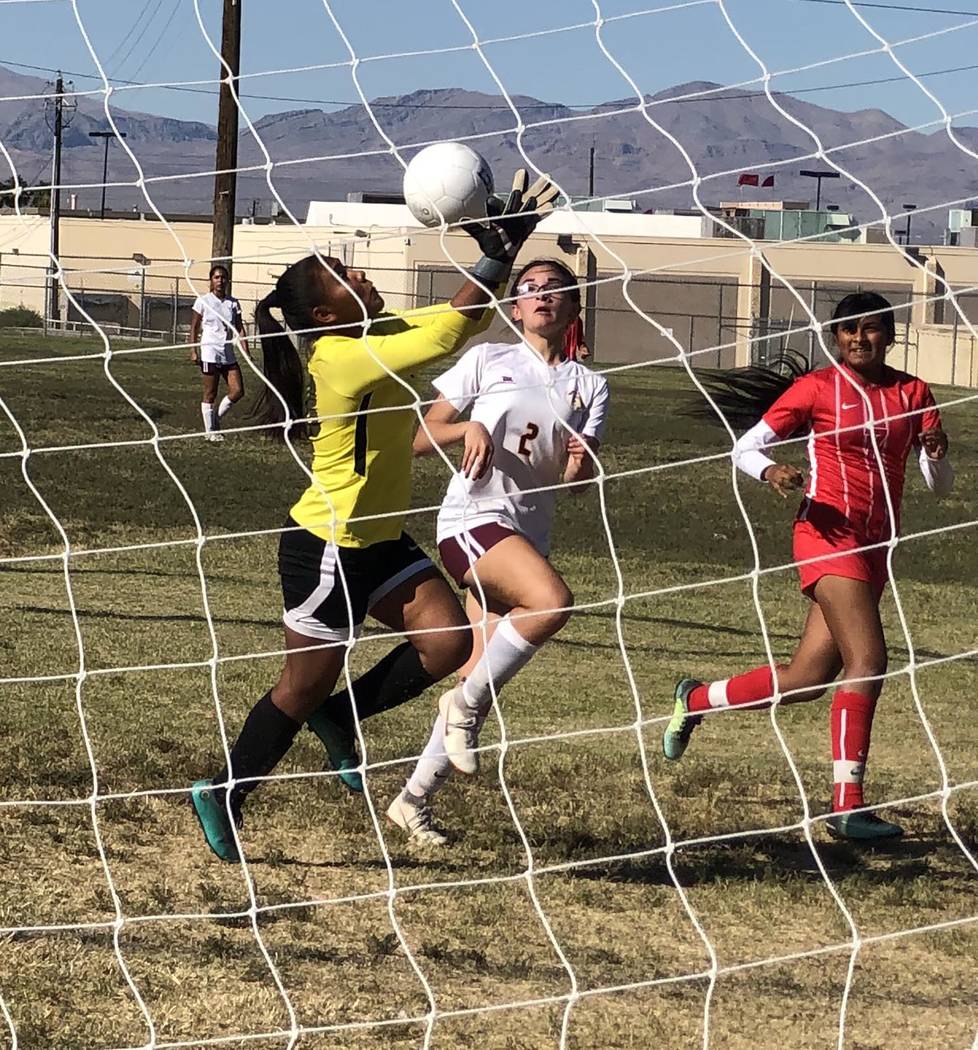 It wasn’t exactly worth the wait, but a win is a win.

Junior Kaylee Mendoza scored her team-leading 15th and 16th goals and freshman Adryanna Avena-Caraballo added a goal and an assist Tuesday as the Trojans thoroughly dominated Valley 5-0 in Las Vegas.

Squeezed in just to the west of the football stadium — not in use this year because the worn-out turf has been deemed a safety hazard — Valley’s soccer field has very little grass, several sandpits and hard-to-see lines, making it tougher to deal with than the feisty but disorganized Vikings.

“They were aggressive, but nothing really bad,” Avena-Caraballo said. “Overall, it was mostly the field.”

“I just think that our team is awesome at adapting to any environment we are faced with,” junior Makayla Gent said. “Our girls work hard every single game, and we work well together as a team. No matter what environment we are playing in, we can do it.”

Mendoza and Jessica Garcia scored first-half goals for the Trojans (7-2-3, 1-0 Sunset), who weren’t quite aggressive enough for coach Julie Carrington. “You’re not that tired! This isn’t even hot,” she shouted to her team at one point, frustrated by what seemed to be somewhat lackadaisical play in spots.

But Carrington had to acknowledge the field might have played a role in that.

“They were not passing as hard as they could on turf, but they need to learn to play on this,” she said. “You get spoiled on turf.”

The Trojans took command with a scoring burst after halftime. Maddy Souza scored from 20 yards out to make it 3-0, and Mendoza sent a left-footed blast past Valley keeper Sasha Centeno off of a nice pass from Avena-Caraballo for a 4-0 lead.

Peppering the opposing keeper with shots is a staple of Carrington’s playbook, and her players are getting more comfortable shooting from anywhere.

“I am,” Avena-Caraballo said. “I’ve learned to adapt to that a lot more. Last year, playing on club teams, it was more trying to work it up and get closer to the goal. I’ve learned to take shots farther out.”

It seems to be working, as Avena-Caraballo is third on the team in goals (8) and points (20).

Gent, too, fired off several hard shots, most of which were just a bit high. But Gent was more angry at herself for a weak cross attempt than for any of her off-target shots, knowing that’s just part of the plan.

“It’s like a rush,” Gent said of getting the ball within range of the net. “It’s like, ‘Oh my god, the goal’s right there.’ I don’t want to mess up for my team. But if I do miss, hopefully, it will rebound back to one of them for a shot.”

By that point, it was more about preserving the shutout for freshman goalkeeper Madison Lee than adding to the lead, a point Carrington made clear during the second-half hydration break.

“Not only does a keeper get recognition for that, it builds up the keeper,” she explained. “If we can keep it a shutout at this level, by the time we get to Western she’ll have more confidence in herself, and that in turn is going to make a huge difference when she gets out on that field. If she feels confident, my defensive line will feel confident and then I won’t have to necessarily worry about the mental game.”

There were only a couple of serious threats to the shutout, including a missed penalty kick by Valley’s Litzy Mendoza, who sent the ball well over the crossbar, and aside from a bit of carelessness, the Trojans easily held off any Viking threats.

While the Trojans were clearly the better team, winning the first league game is always important, and after Thursday’s game against Mojave, Western is next on the agenda. The Trojans and Warriors split two regular-season games last year before the Trojans used a late goal by Gent to forge a 1-0 win against the Warriors to claim the Class 3 Southern Region championship.

Gent and Avena-Caraballo believe the Trojans are ready for them.

“This team has so much potential, and I think as time goes on we’re going to get further and further to where we reach that potential,” Gent said.