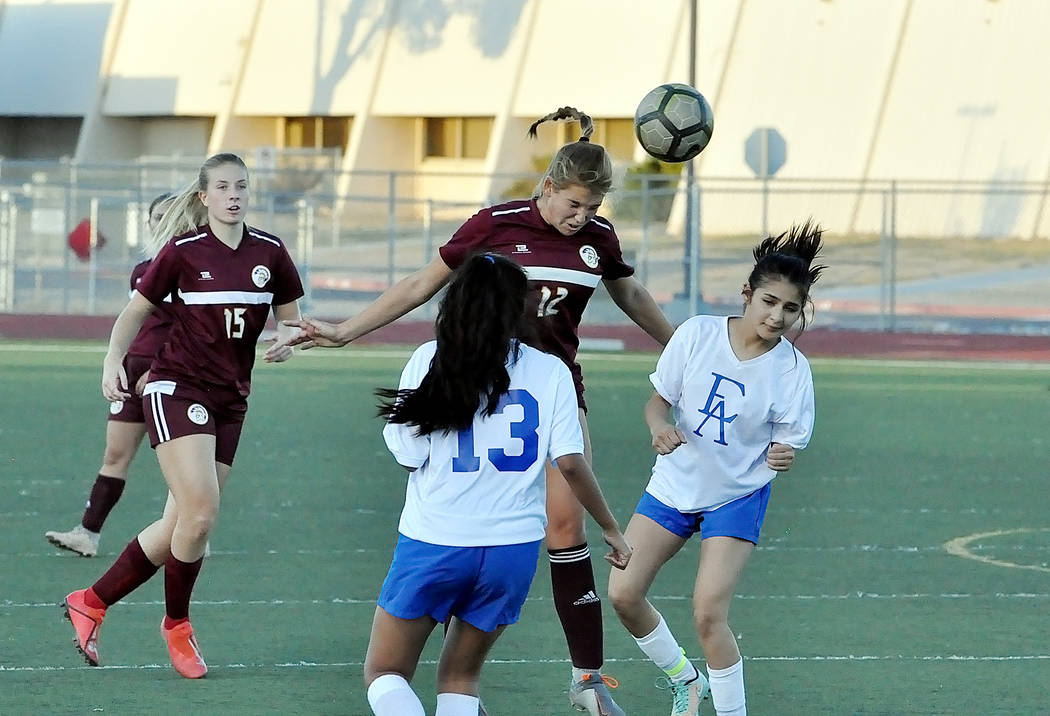 Horace Langford Jr./Pahrump Valley Times Pahrump Valley junior Maddy Souza, shown heading the ball earlier this season against Equipo Academy, assisted on one of the Trojans' goals during a 3-1 win over Moapa Valley on Monday night in Las Vegas. 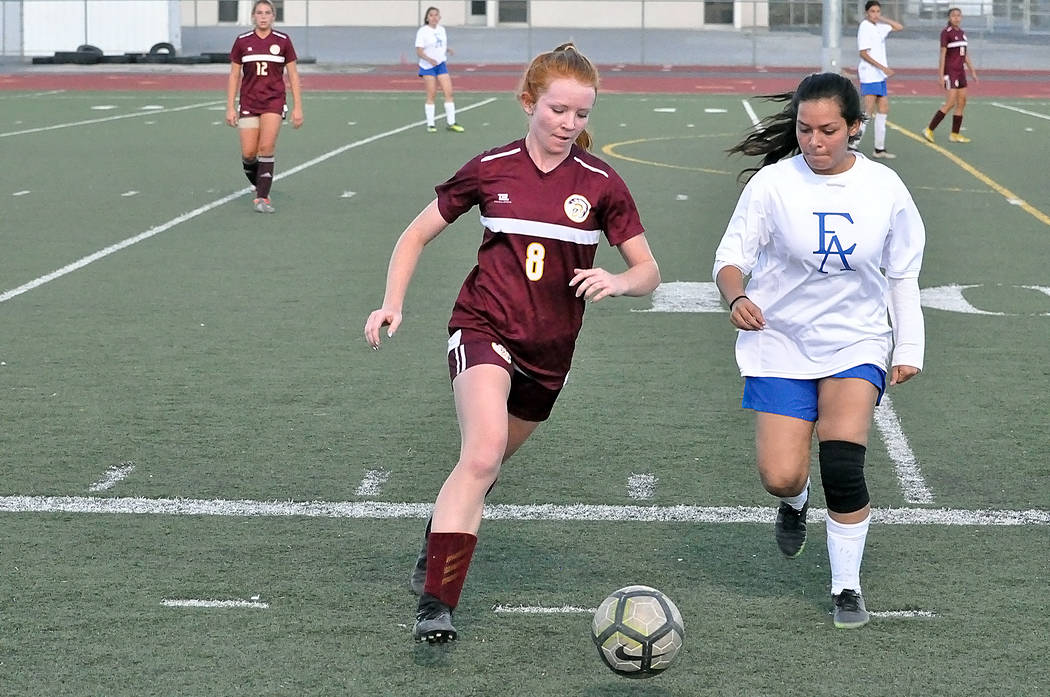 If nobody sees a soccer ball go into the net, is it a goal?

Unlike the proverbial tree falling in a forest, the answer Monday night was yes, and that answer started the Pahrump Valley High School girls soccer team on its way into the second round of the Class 3A Southern Regional Tournament.

“We beat them only 1-0,” Pahrump Valley coach Julie Carrington said of a Sept. 10 game in Pahrump. “They have some good juniors, a couple of really good girls on that team.”

Both teams began tentatively, and while the Pirates seemed slow to get into a rhythm, the Trojans found their footing first.

“I thought we were a little slow in the beginning,” Carrington said. “We were doing a little more kickball, but I think we were just feeling out their team. Once our girls got their bearings, they were just on point.”

Of course, a little help from the Pirates didn’t hurt, and they had a hand in the mysterious first goal of the game.

“(Kaylee) Mendoza was taking it down, and I was coming down from playing back and she had crossed it,” Avena-Caraballo explained. “I had actually just gotten there before it went outside the lines, so I kicked it, trying to cross it back over. “It didn’t really happen, and the defender jumped up, swung her foot and hit it off her shin guard, and it went in.”

Nobody on the sidelines had any idea the ball went into the net, and coaches on each bench were left asking each other, “Was that a goal?” Even after the Pirates put the ball in play, coaches were not entirely sure a goal had been scored.

“I didn’t think it was a goal,” Carrington said. “I was confused about why the ball came out. It was quite weird. They said it went off one of our girls, but that’s not what our girls said.”

Regardless, it was 1-0 Trojans midway through the first half.

Each side had a few quality chances before halftime, but the Trojans had the better of play. Makayla Gent was especially effective in generating chances, hitting the crossbar within the first 10 minutes and sending several quality crosses toward the box. Gent finished with a team-leading 7 shots on goal for the Trojans.

Makenzie Staheli played that role for the Pirates, putting a cross right in front of the Trojans’ net during the 26th minute and missing on a point-blank shot a few minutes later.

But the game remained 1-0 until the 54th minute, when Mendoza sent a low line drive into the Moapa Valley net as the Pirates bench screamed for an offsides call. Just 4 minutes later came the shot of the night, as Avena-Caraballo nailed a left-footed shot from outside the box into the Pirates’ net.

“I don’t get very many shots like that, so when I get them I try to take advantage of them,” Avena-Caraballo said. “Left is my dominant foot, and actually I spend more time working with my right because I’m trying to do it both ways.”

Moapa Valley tried to mount an attack several times during the second half but only had a couple of quality chances. On one of them, a hard shot hit the near post to the right of Pahrump Valley goalkeeper Madison Lee, and the Pirates drew a foul off of the rebound and were awarded a penalty shot. Staheli fired a shot near the post to Lee’s left, and it spun in to put the Pirates on the board during the 68th minute.

Aside from the second yellow card of the game, not much happened the rest of the way, with the Trojans easily turning away Pirate attacks before they became dangerous. The Trojans finished with 21 shots, 15 on goal, while Lee needed to make 6 saves for the victory.

Carrington admitted she was a bit nervous going into the game and was delighted with how her team performed.

“I was really impressed because we didn’t have to sub a lot,” she said. “Offensively, I thought we were doing much better. All three of my forwards were getting up where they needed to go. My defensive line pushed all the way up, and I was really happy with that.”