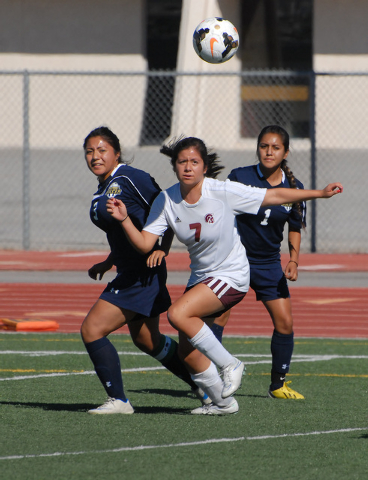 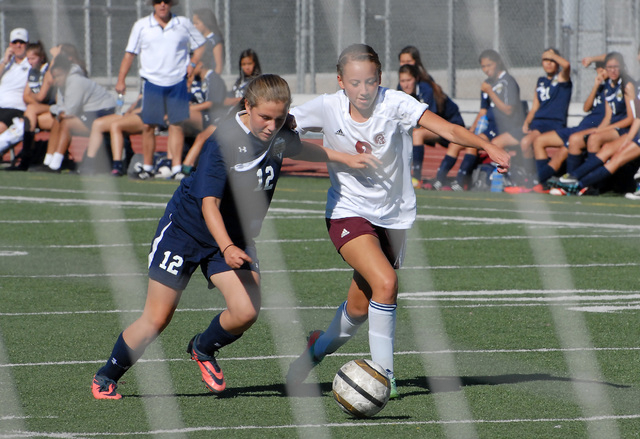 Two Trojans had to leave the game against Sierra Vista last week, freshman Sydney Dennis and sophomore Maddy Pereira. In that game, Dennis suffered a sore knee due to tendinitis and Pereira had a minor back injury. Both were back for the Cheyenne game, which was two days later.

Pahrump was able to get their offense going first with Yesenia Garcia, who scored a goal in the first half at 19:45 for the Trojans to make it 1-0. This would be the only score for either team during the first half. In that half, Pahrump was in control keeping the ball mainly on the Cheyenne side of the field.

In the second half Cheyenne came out strong, scoring the first two goals of the half. At 28:22, Stephanie Chinchilla for the Desert Shields kicked the ball at the Trojans goalkeeper, Jessica Friesz, who caught the ball and then dropped it in the goal for the 1-1 tie.

Eleven minutes later the Desert Shields had a corner kick and Maya Heard headed the ball in to take the lead against the Trojans at 17:13. Trojans Coach Pam Larmouth said that goal should never had happened. “Nobody was covering anyone on that corner kick,” she said after the game.

Coach Pam Larmouth said the Trojans seemed to have lost something on defense at the beginning of the second half and they had to regain their composure late in the game.

“I don’t think they were tired,” Larmouth said. “That is something we are going to have to address for it happened at Sierra Vista too. Maddy and Syd were both hurt, so it was a little different. It seems that we are coming back a little slow in the second half.”

Pahrump kept the pressure on keeping the ball mostly on Cheyenne’s side after the two Desert Shields goals. At 8:59, Dennis took a clear shot from 15 yards out to tie the game at 2-2. Then the Lady Trojans then made it look easy almost three minutes later when Garcia came down the left side of the field and was wide open to score the tiebreaker, 3-2 at 6:33.

After the last score, Cheyenne had nothing left. The Trojans played ball control and ran the time off the clock for the win.

The Trojans youth are learning to deal with the pressure, Larmouth said.

“It looks like they are doing well to me,” she said. “They tell everyone they are having a good time so I don’t think there is too much pressure… It’s a life experience for them and that’s what I tell them, this is life. And they are doing it.”

Unlike last year when the now graduated Sydney Sladek scored 78 goals, this year’s scoring is spread out. There are five players with more than one goal this year. Dennis leads with 9, Paige Chafee has 8, Garcia has 7, Vaniah Vitto has 3 and Winter Young has 2.

Injuries kept Chafee more on the defensive side.

“With all the injuries this means one of our scorers, Chafee, has to play more defense,” Larmouth said. “We have to replace Alyssa.”