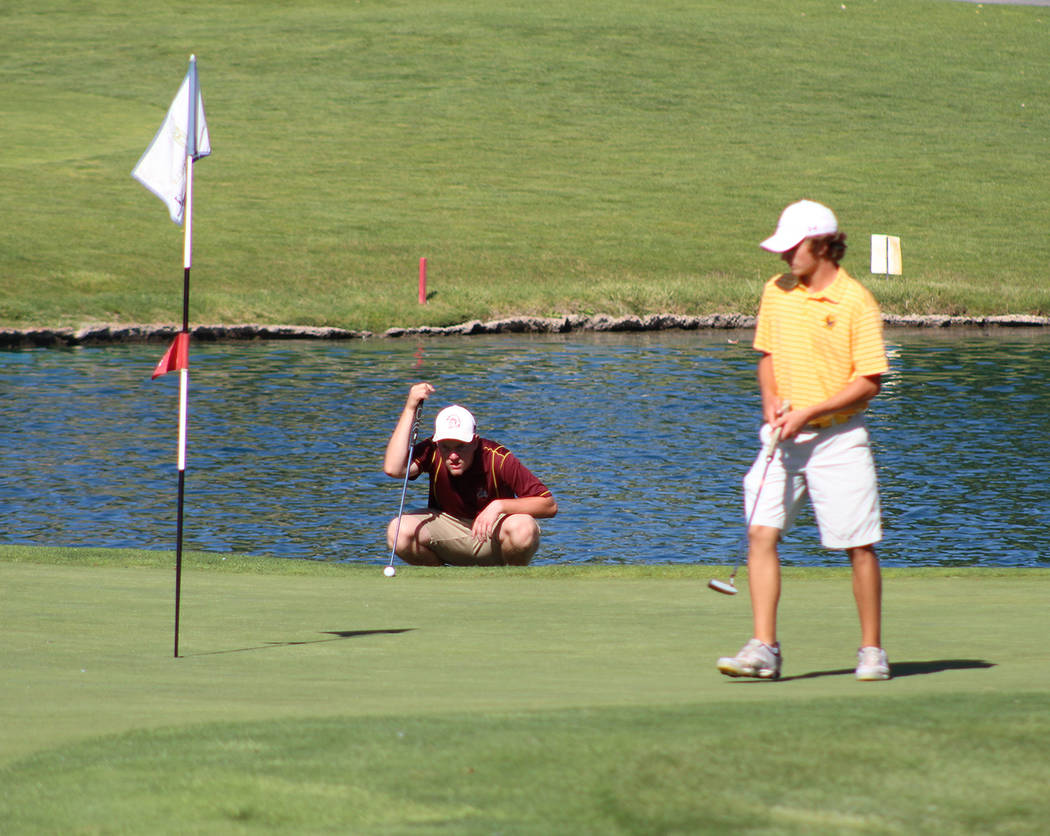 Tom Rysinski/Pahrump Valley Times Pahrump Valley sophomore Koby Lindberg lines up his putt as a Boulder City golfer waits his turn on the 18th green Tuesday during the Class 3A state championship at Mountain Falls. 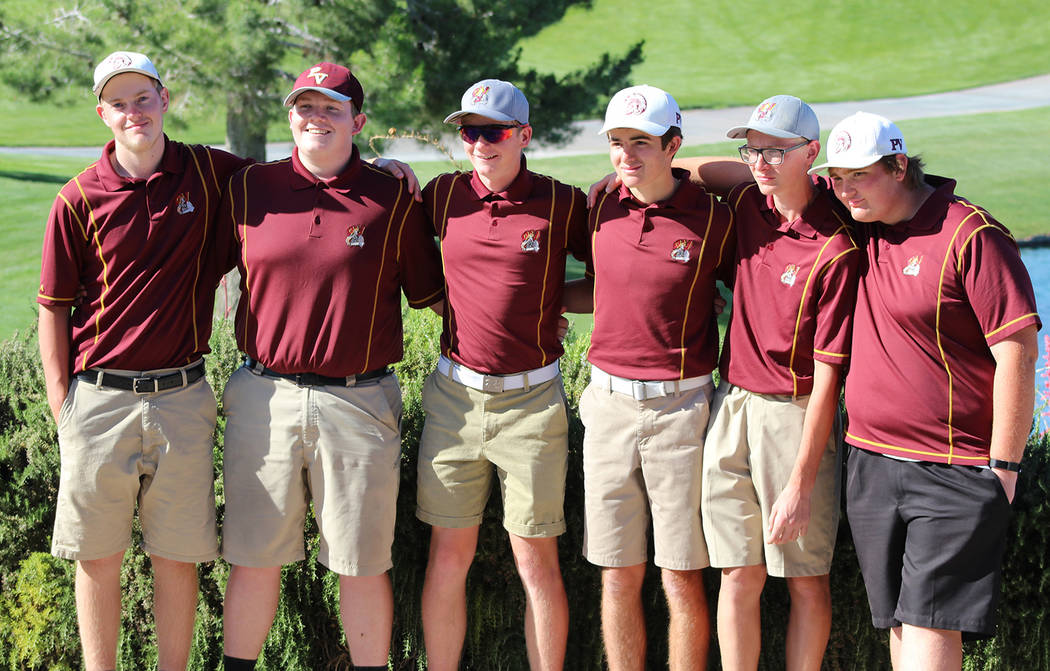 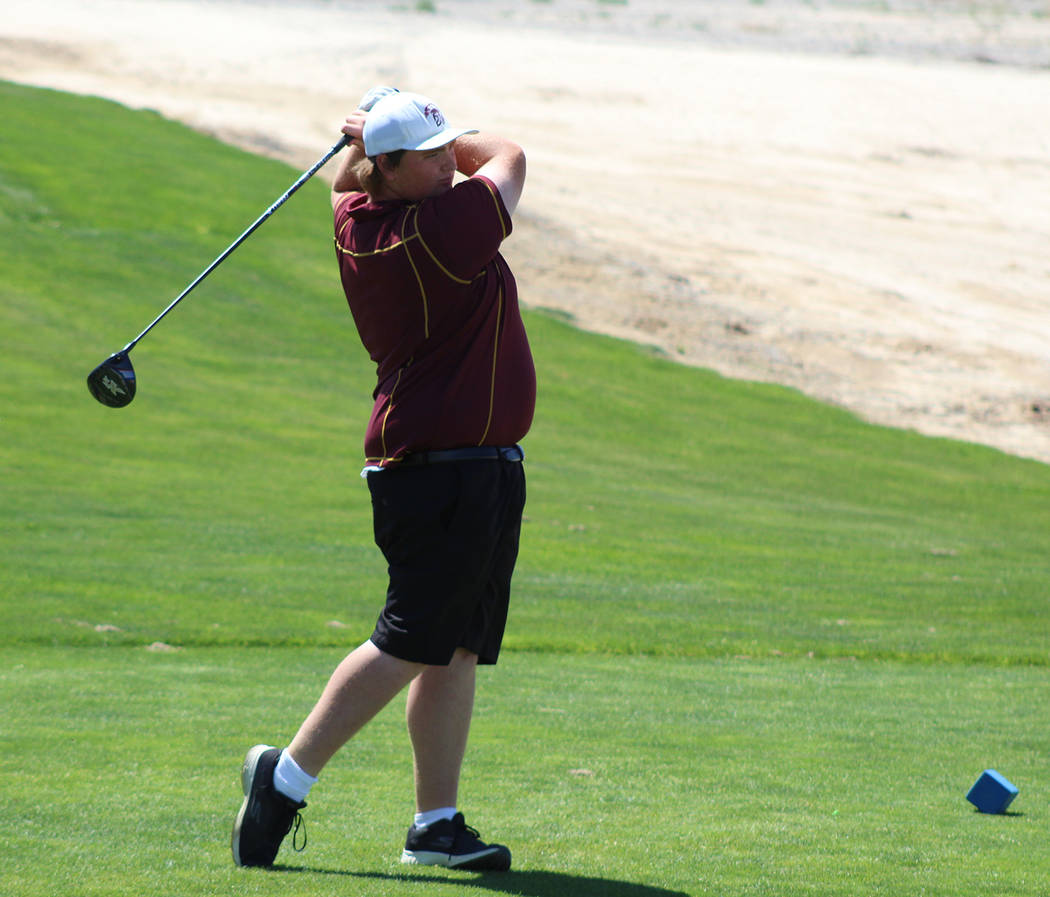 Tom Rysinski/Pahrump Valley Times Pahrump Valley senior Mike McDougall tees off to open his second round at the Class 3A state championship Tuesday at Mountain Falls. McDougall's two-day total of 169 tied for 12th. 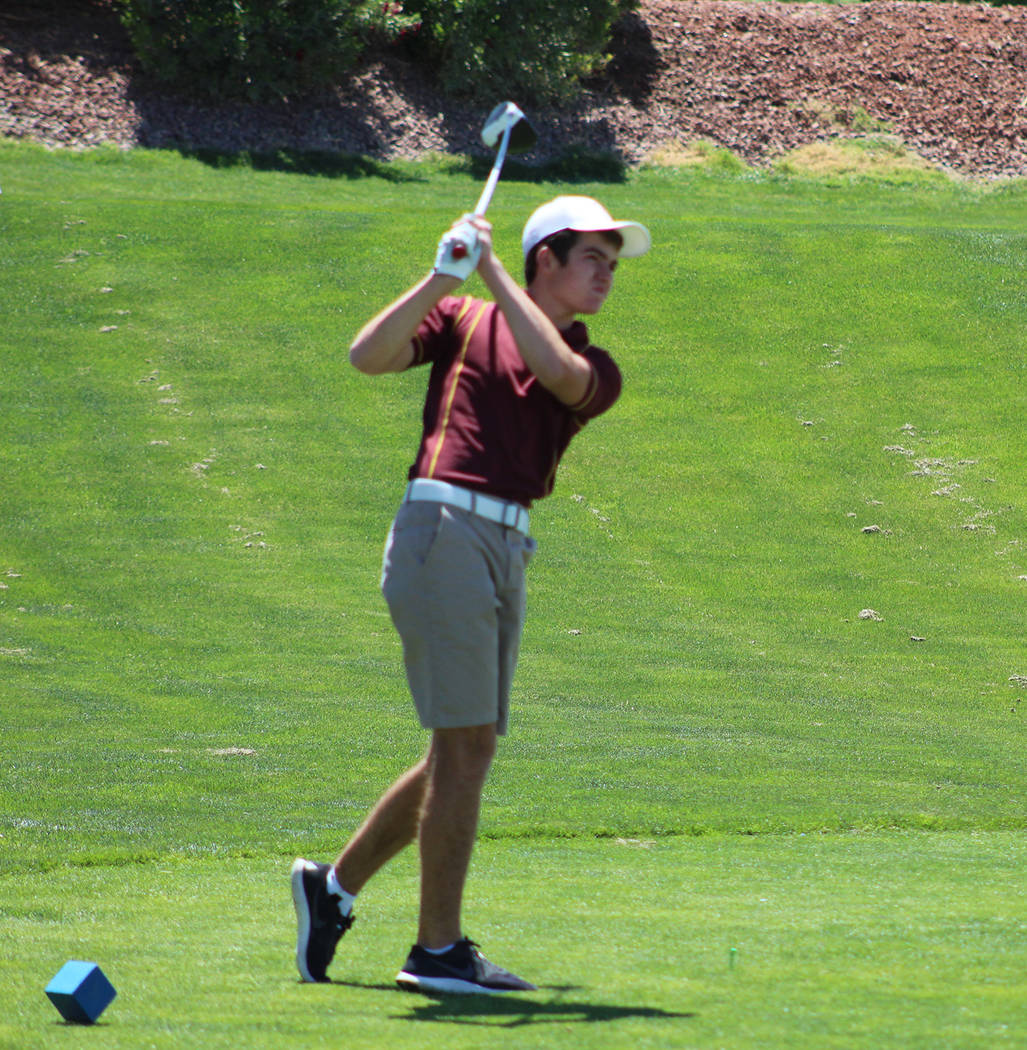 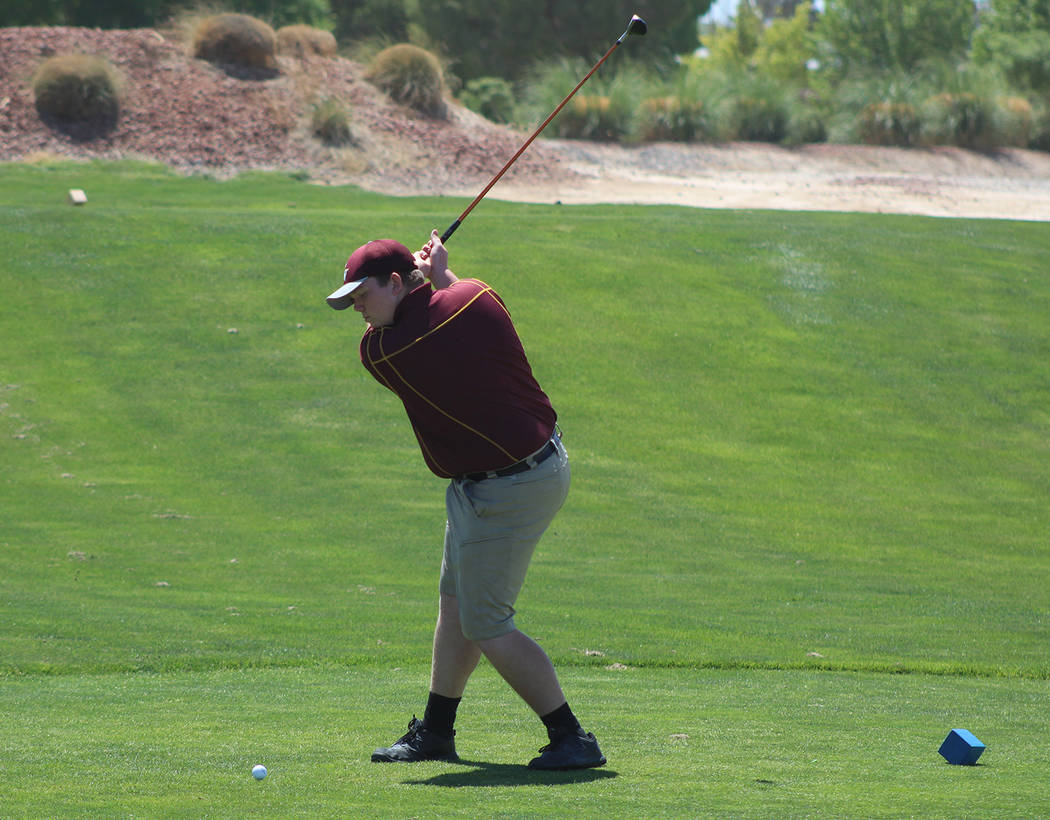 Tom Rysinski/Pahrump Valley Times Pahrump Valley junior Trevyn Wombaker on the first tee Tuesday at Mountain Falls at the start of the second round of the Class 3A state championship. 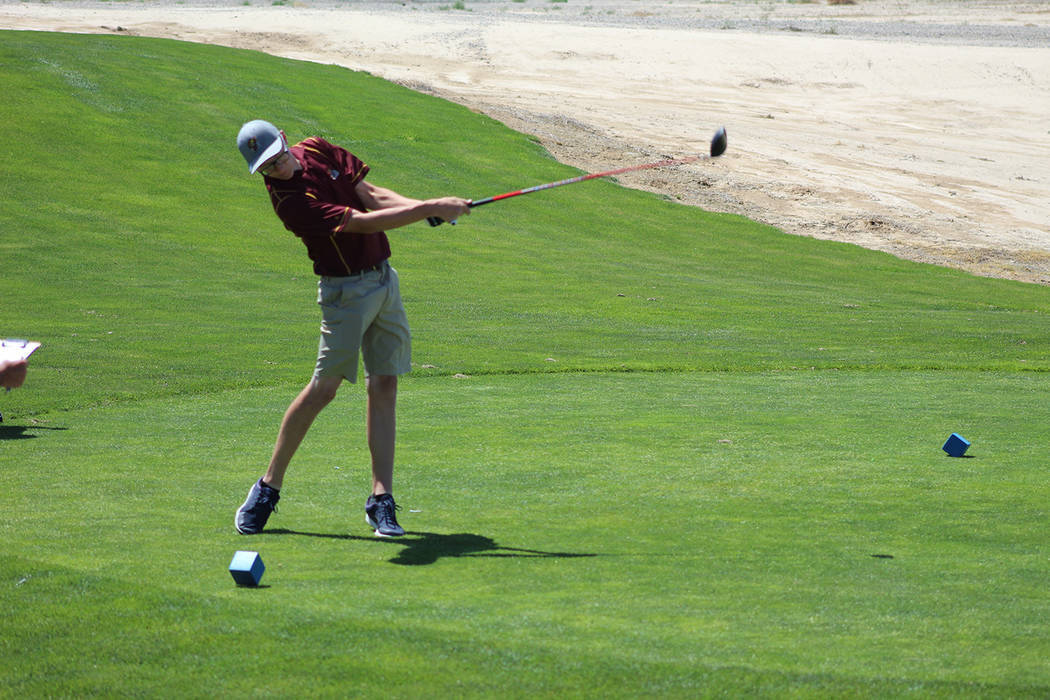 Tom Rysinski/Pahrump Valley Times Sophomore Kasey Dilger shot his best round of the season Tuesday at Mountain Falls, making four birdies during a second-round 85 at the Class 3A state championship. 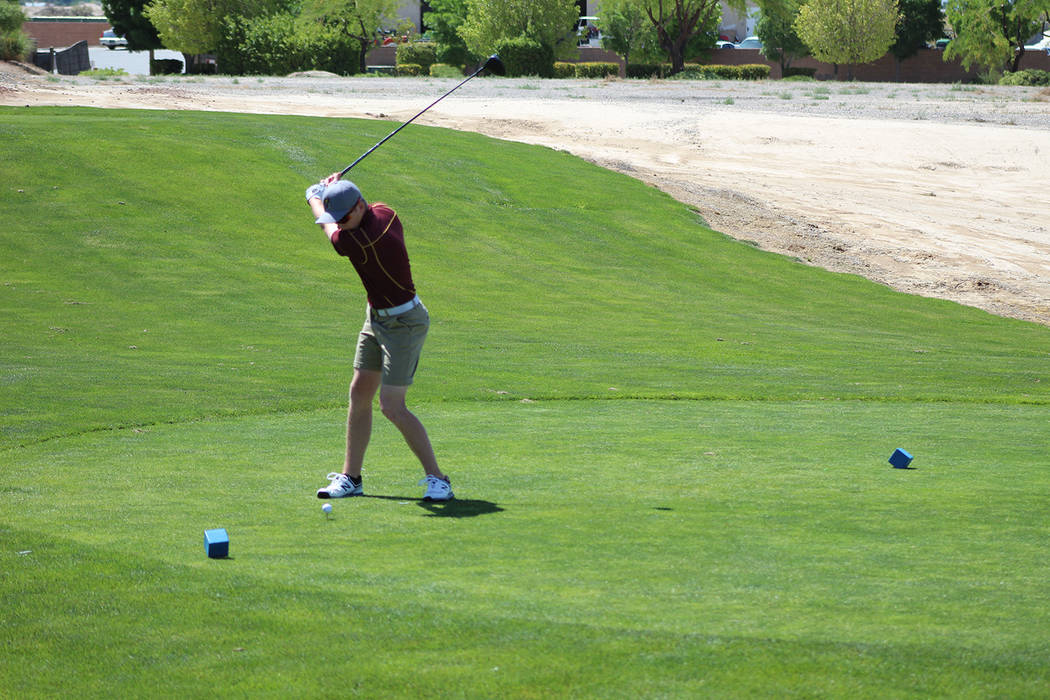 Pahrump Valley’s golf team tried not to take the burden of high expectations into the Class 3A state tournament held Monday and Tuesday at Mountain Falls Golf Course.

“We didn’t want to get last,” senior Craig Moore said. “After the first day, we wanted to get third, and we got that.”

Three Pahrump Valley golfers finished in the top 13 to lead the Trojans to that third-place finish.

As has often been the case this season, Trojans teammates were bunched together on the leaderboard. Sophomore Koby Lindberg finished 11th at 167, with Moore and classmate Mike McDougall right behind in a three-way tie for 12th at 169. Trevyn Wombaker, who tied for 25th at 177, was the fourth scoring golfer as the Trojans totaled 675, behind champion Bounder City (643) and Spring Creek (644) and ahead of Lowry (697) and South Tahoe (698).

Pahrump Valley coach Bob Hopkins was pleased with the results, especially after what he considered to be a subpar performance a week earlier in the Class 3A Southern regional tournament, when Boulder City had beaten Pahrump Valley by 84 strokes to defend their championship.

“In the regional we didn’t play very well, and I told the coaches that I thought we could say within 15 of Boulder each day, and that’s basically what we did,” Hopkins said.

Lindberg and Moore were consistent, each bettering their first-round score by one stroke the second day.

“I just wanted to be in the 80s both days at least, and I wanted to improve from last year, which I did,” said Lindberg, who posted rounds of 84 and 83 on the par-72 course. “Last year I was in the 90s both days” at Spring Creek.

“I didn’t take too many big numbers, and that’s why I shot some of my best rounds this year,” said Moore, who fired an 85 on Monday and 84 on Tuesday.

As a team, the Trojans improved their score by seven strokes from Monday to Tuesday. Five strokes came from McDougall, who followed a first-round 87 with an 82 in the second.

“I finished both rounds pretty terribly,” said McDougall, who had eight pars and no birdies during the first round but nine pars and a birdie during the second. “Yesterday I was plus seven through the final three holes. Today I was plus six through the final three holes. Both rounds I could have been in the low 80s or high 70s but had a disappointing finish.

“Other than that I’m pretty happy, and 82 is probably the best round I’ve shot in high school. It’s a great way to finish.”

Hopkins noted that McDougall was not the only Trojan to shoot his best round of the season in the biggest tournament. Wombaker’s first-round 85 was his best, while Kasey Dilger shaved 12 strokes off of his first-round score to post an 85 in the second, including birdies on Nos. 7, 8, 11 and 18.

Playing on what is effectively their home course certainly helped.

“It made no difference to me that this was state as opposed to any other time I’m walking 18 holes,” McDougall said. “And the spectators weren’t annoying at all, so this was just another round of golf out there.

“The pin placements were a bit harder, that’s about it. On 18, they put it in the hardest spot, and hole 11 they put it somewhere they never put it, off to the far right side. It was just so obscure, it kind of put me off guard. Other than that, it was just fine.”

Experience was another factor. McDougall, Moore and Lindberg all played in last year’s Class 3A state championship, where the Trojans finished fifth despite the presence of state runner-up and region champion Austin Ancell.

“Overall, I’m very pleased,” Hopkins said. “We got some great experience for next year. When they play like they did, they’re going to be want to be standing up there next year getting a trophy.”

Next year is already on the Trojans’ minds, as only Moore and McDougall are graduating and they will have six returning letter winners.

“I’m looking forward to next year,” Lindberg said. “We’re going to train a lot in the offseason.

“We have great coaches at our high school. I wouldn’t want any other coach.”

And that coach is equally optimistic.

“Our program is heading in the right direction,” Hopkins said.