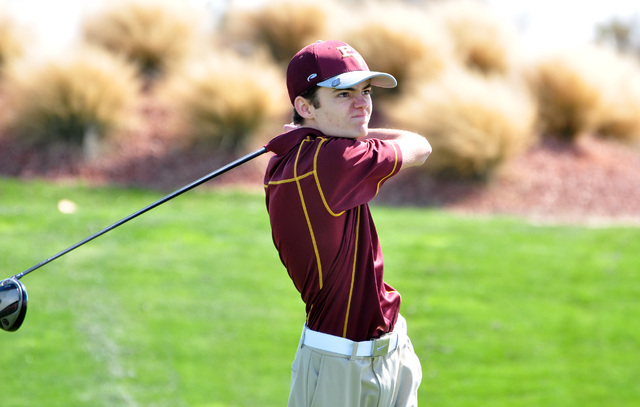 The Trojans golf team scrimmaged with the Bishop Gorman golf team on Tuesday afternoon. It was their second outing of the season. Last week the Trojans were at Palo Verde in another preseason scrimmage at TPC at the Canyons.

The results of a scrimmage are not permitted to be published according to NIAA rules and so Trojans Coach Bob Hopkins told his team on Tuesday to go out and just have a little fun against Gorman.

“Last week we only got nine holes in because we didn’t want them missing too much school,” Hopkins said. “We are just getting ready for next week’s big invitational.”

He said the invitational will have 108 entries next Thursday with teams coming as far as California. Mater Dei, a Catholic powerhouse in football from Orange County California, will be making the trip.

This year the team has 20 students on the team and no seniors.

“We have a bunch of young freshmen on the team,” the coach said.

The two top golfers for the team are Ancell and Moore. Both made state last year.

Ancell says the team is young and that’s a good thing.

“We will have the same team for the next two years,” he said.

He said to get to state this year he will have to learn to block out the crowds better.

“Last year I had a couple of rotten days due to the crowds,” he said. “I will just have to focus better on my shot.”

Ancell said he would like to improve his shots 100 yards and under.

“Any shots that close I want to be able to put somewhere on the green,” he said. “These shots should be automatic on the green so I can get close enough for the birdie shot.”

Ancell was recently honored by being invited down to Australia to play golf. He said he could join 66 other players that were chosen to represent their state. Ancell added though he has to raise $6,600 in funds to attend the sporting event.

The event is being sponsored by Down Under Sports, which regularly invites high school athletes to compete each year in high school olympic style games. The organization invites athletes from the following sports: basketball, cross country, football, golf, track and field, volleyball and wrestling.

Ancell said he will be doing a lot of fundraising in addition to his already heavy schedule.

Moore said he has been having problems making it to practice because of schoolwork but things are getting better. The key for him this year for making state is to get his balls inbounds and playing smart golf.

“I really don’t want to make the big mistakes this year,” he said. “I need to just make pars.”