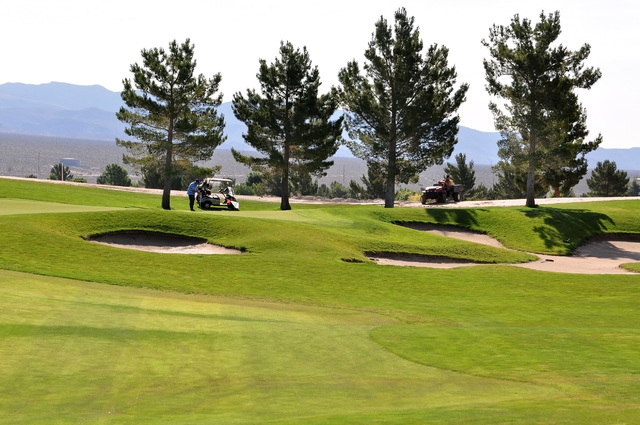 The Nevada high school state championship will be held this year at Mountain Falls Golf Course, a par 72, 18-hole course. Randy Mudge is the new golf professional and he talked to the PVT about what he thinks are the five toughest holes that the golfers will face at Mountain Falls.

Mudge is the new golf pro at Mountain Falls, replacing Jason Pomroy, who moved to St. Augustine, Florida. Mudge has been a professional golfer since 1988. The golf pro moved to Pahrump a month ago from Henderson, where he was the golf professional at Black Mountain Golf Course.

The toughest hole is hole 6, a par 4, 420-yard hole (all yards from the blue tees). Mudge says one of the things that makes this hole tough is the yardage.

“What makes this a tough hole is the distance, the placement of the shot and the fairway, which narrows,” Mudge said. “You have a narrow landing area with bunkers on the left and trees and rough on the right.”

Mudge said he likes to hit his ball from the tee just right of center or in the middle toward the trees.

“The second shot is important because you have a very difficult green with bunkers in front, and trees/rough in the back,” he said. “And the green slopes to the right. If you are going to miss you want to go to the left because the rough there is not as hard as the rough to the right in the trees.”

He says the green is no joke either.

“The green also has some good undulation to it,” Mudge said. “Golfers with a 300 yard drive can reach this hole in two, but the green is hard. Most of the high school students can get on in two. What makes the green difficult is the slope and the way it breaks in different directions.”

According to Randy Mudge the U.S. Open has its greens around an 11.

From the tee one can’t see the green because it has a slight dogleg to the left.

Mudge likes to hit from the tee right center.

“If you try to cut too much on this hole you will end up in the hazard on the left,” he said.

He said the green is well protected.

“You have a green that slopes away from you toward the water,” Mudge said. “The green itself has water to the left and bunkers to the right. The right side of the green is difficult because of the bunkers and the left has the water.”

He added that once you get on, you have to contend with the slope of the green.

“Nothing really is easy on this hole anywhere,” Mudge said.

Mudge said the ninth hole intimidates you right from the beginning. Mudge likes to shoot right center from this tee.

“You have bunkers left and right with water to the left and out of bounds to the right,” he said. “The sand is very hard. Visually, this hole catches you right off the tee. If you hook it, those bunkers will catch a lot of average shots. You really don’t want to mess with the left side of the fairway.”

Mudge also said the rough is as rough as it gets.

“The rough is also thick and not forgiving,” Mudge said.

He explained that this hole has two greens and you have a choice of hard or harder. In this case, for the tournament, the boys will be given the right side green, which is the hardest. Like most of the greens at Mountain Falls, this green is large, fast and sloped.

“It comes down to a putting contest,” the golfer said. “Who can make putts. You want to be right center on this hole. There are two greens on this hole with the hardest one being the one on the right. The hard one has a lot of break to it and is the farthest one out.”

This hole is the fourth hardest hole.

Mudge recommends aiming for the center of this green. The green slopes to the left.

This hole is 420 yards. It is the fifth hardest hole on the golf course.

“A good tee shot because you have bunkers left and bunkers right,” the pro said. “You have a big green that slopes away from you right to left.”

Mudge said on this hole that the placement of your tee shot is critical. He says people make the mistake of trying to go left too much.

“The average high school kid will be around 150 yards out on their second shot and they have to be at the right place on the fairway because the green slopes hard left,” he said.” The ideal shot would be right center, which would give you a good view of the green and nothing hidden.”

On this hole you have a little bit of everything, water, out of bound and bunkers.

The greens at Mountain Falls are rated at a 10.5.