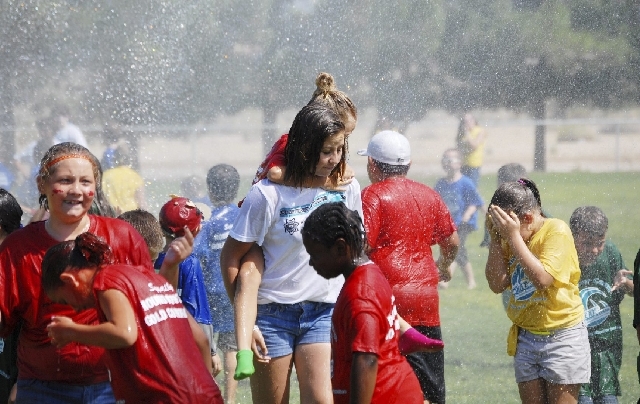 The GREAT Games finished the season in Pahrump.

The games almost did not hit the road this year. The county was experiencing budget problems and had pulled the plug on this year’s games. At the last minute, the program was saved with a $10,000 grant from Round Mountain Gold.

Boulden said the company has helped every year with the Round Mountain games, and this was the first year they helped countywide.

The GREAT Games are in their sixth year and each year the deputies go out and take their anti-gang message on the road. During the games hundreds of kids play, have fun and learn alternative ways to gangs, drugs and violence.

“The mission is to provide the positive alternative activities other than gangs, violence, drug abuse and crime,” Boulden said.

This week at Ian Deutch Memorial Park the games attracted about 100 kids.

“This is the biggest one, but it is the smallest one for Pahrump. This is just proof that there is more to offer kids in the valley. Here you have two or three Boy Scout groups going, vocational Bible groups going. How do you compete with that? We used to be the premier group around, but because of other community events during the summer we are not so premier any more,” Boulden said.

The deputies rely on teen and college-age students to drive the program. Over the years, certain families in the community contributed their sons and daughters, like the Ewing family.

“Melissa Ewing was another one who was here every year until she went to college. There have been several others,” he said.

The deputy said the program draws many of the teen coaches from clubs and student council at the high schools. Clubs like Key Club and organizations like Junior ROTC provide many of the coaches.

This year Dave and Laurie Lawdensky have two college students from college and one teen from Pahrump Valley High working the games, David, Valerie and Melanie.

“The Lawdensky family has grown up with the program. They are as much a part of the GREAT games as we are,” Boulden said.

David Lawdensky is a 21-year-old University of Nevada Las Vegas student who is majoring in film. He has worked the games for six years and this year he is the HUGO or Honorary Great Official. This is the person in charge of all the coaches.

“I come back every year for this. It’s fun. I love it. For me, it’s all about giving the kids a good experience. Some of these kids are cooped up in the house or they are with just a few friends. It’s a great way to get them out and make new friends. In my opinion, the GREAT program is great because it gives the kids something to look forward to, as opposed to nothingness and bad habits. It’s a good way to teach them how to have fun,” David said.

Valerie is the second oldest of the family. She graduated at 17 from PVHS in 2012. She is a sophomore at UNLV but has credits to be a senior. She is majoring in mechanical engineering and math.

“I finally came out here to join David. I couldn’t when David started. When I finally did, I had the best team ever. I had a great co-coach and we ended up winning first. Well, it’s pretty special when you get a medal. Last year, we did not get first but third. Right now we are in fourth, but it still is the most fun thing I have gotten to do all summer. I was in California last week and this is still the highlight of my summer. These are some of the best kids I have encountered,” Valerie said.

Melanie, the last Lawdensky, attends Pahrump Valley High School. She is a senior this year and plays varsity softball and runs cross country. She also is an honors student like her siblings.

“My first year I was the coach and the past two years I have been the Game Master,” she said. “I think of fun games and set them up and help David out any way I can.

“When I finally got old enough and less busy, I decided to come out with David and coaching was a tough job. I give tops to all the coaches on having to handle the kids, especially because the last couple of years we only had three coaches per team. Now, we have so many more coaches it is fantastic.”