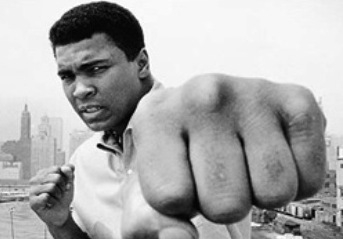 He was born Cassius Marcellus Clay on January 17, 1942. But to the world he was known as Muhammad Ali. Forever in my mind he will be the boxing champion that I will never forget. To me he brought boxing into every living room in the country.

Ali quietly passed away in a Phoenix hospital at the age of 74 from Parkinson’s disease on Saturday evening.

Back in the day there was no pay per view TV, but there was closed circuit TV and so most people had to watch Ali on tape delay. When I was growing up, literally every family in my neighborhood that I can remember gathered around the family TV to watch Ali fight, delay or not. Ali truly was in everyone’s living room and I think the reason was TV was simpler back then. Who knows, but he certainly knew how to captivate an audience.

The one thing people who saw him can’t deny, was that Ali was a great showman. He was known for saying the most outlandish things like when he declared himself the greatest fighter ever, “I am the greatest. I said that even before I knew I was. I figured that if I said it enough, I would convince the world that I really was the greatest.”

Or when he let the world know that he was a poet before the Joe Frazier fight in 1971, “Joe’s gonna come out smokin’, but I ain’t gonna be jokin’. This might shock and amaze ya, but I’m going to destroy Joe Frazier.”

And of course one of his best quotes was before the George Foreman fight. How can anyone forget the floating like butterfly quote:

“You think the world was shocked when Nixon resigned? Wait `til I whup George Foreman’s behind. Float like a butterfly, sting like a bee. His hand can’t hit what his eyes can’t see. Now you see me, now you don’t. George thinks he will, but I know he won’t. I done wrassled with an alligator, I done tussled with a whale. Only last week I murdered a rock, injured a stone, hospitalized a brick. I’m so mean, I make medicine sick.” Oct. 30 1974, The Rumble in the Jungle.

Ali and Frazier’s first fight, held at Madison Square Garden on March 8, 1971 was the first fight of Ali’s that I could remember. I remember watching the fight on a small black and white TV which was about 28 inches. That was big for the day. My father loved yelling at Ali. I still remember him saying, “Take him out, take him out (expletive, expletive) now, what are you waiting for…”

And you can’t forget Howard Cosell. He was just becoming a famous sports correspondent. The infamous broadcaster he called most of Ali’s fights immediately before and after the boxer’s three-year exile from 1970-73 for avoiding the draft, with exception of the first Frazier fight. The two often traded barbs on the air, but truly respected each other off the air.

The two were friends. Cosell was among the first reporters to call Ali by his Muslim name and said this about the boxer when Ali turned 50 in 1992, “All of the years, all of the times together, I’ve enjoyed them. You’re a very special man. With a very special meaning to all of the American people. I congratulate you. It’s my honor. Your name is Muhammad Ali.”

Cosell was a fixture in Ali’s career and their banter will go down in history as truly colorful.

I look at the fighters of today and there will never be another character like Ali. Sure, many try to be like him and mimic him, but they pale in comparison.

He was the king of trash talk, but what I liked about Ali, was that he was able to back up what he said in the ring. There aren’t too many fighters that can do that now.

Boxing has not been the same since he retired 34 years ago.

Rest in peace Muhammad Ali, you were truly the greatest.