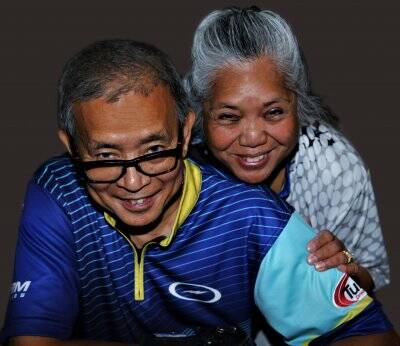 In the A division, Gobbi and Pallet took the top spot with a combined score of 1,736 points. Gobbi finished with a score of 901, while Pallett bowled a total score of 835.

Finishing just a few points behind Gobbi and Pallet for second place in the A division was the team of Charity Musial and Bernard Curtis.

The third-place finishers for the A division were June Williams and Frank Medina. The two combined for 1,686 total points.

Medina finished with an individual score of 765 points.

Nenita was one of just two bowlers in the tournament who bowled a perfect 300 game. The other bowler who finished with a 300 game was Dale Bystedt.

In the B division, the team of Rita Rose and Mike McNeley took home the victory. They bowled a combined score of 1,702 points.

The runners-up in the B division was a team comprised of Jan and Gordon Sawyer.

Nancy Glynn and Joe Lopez rounded out the top three spots in the B division. They finished with a total score of 1,646 pins.

In addition to the winnings handed out for the finishing places in the divisions, there were also two different side pots where bowlers could win more money.

In the handicap side pot, 18 bowlers were awarded prize money. The top three places went to Bernard Curtis, Mike McNeley and Fran Gobbi.

In the scratch side pot, seven bowlers won prize money. The top three winners of the side pot were Curtis, Troy Smith Jr. and Anthony Matassa.

Following the tournament, a 50/50 raffle was held and Joe Lopez was named the winner. He went home with additional prize money on top of the winnings he received from his placement in the B division.

Debbie Varner, the PVTBC secretary/treasurer, would like to thank Larry Tobey and Jan Sawyer for helping out at the front desk and with the 50/50 raffle tickets.

The next PVTBC event will be held on Saturday, July 30, at 1 p.m. The event will be a certified Whoops singles tournament with a handicap and a scratch side pot. Varner and Mary Martinez will be the directors of the tournament.