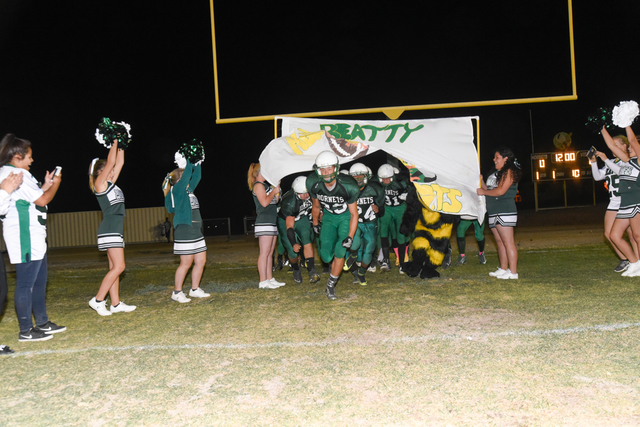 Skylar Stephens / Special to the Pahrump Valley Times Max Taylor leads the team onto the field as the Hornets hit the field for their last home game of the season against Round Mountain. Beatty was eliminated from the playoffs Friday.

The coach wanted his team to just go out fighting.

“We”ll see if it all works out,” Hornets coach Leo Verzilli said. “We”ll give it our best shot.”

And that’s all he ever wanted from this team, which he said was the best football team he has coached for Beatty.

The Hornets lost to Spring Mountain on Friday 44-6, after playing their hearts out in the 1A Southern Region playoffs.

“We played hard,” senior Hornets lineman Robby Revert said. “We had practiced a lot on pass protection and I really think we improved on that.”

Indeed, the Hornets allowed 162-yards passing this second meeting and in the first meeting of the year they allowed close to 245 yards.

But Beatty couldn’t stop the run and the Golden Eagles rushed for 143 yards, which just happened to be more than Beatty’s total offense. Beatty passed the ball for 110 yards, which was for the first time more than they rushed the ball for. They ran for only 15 yards, the lowest amount for the season.

Revert joked that his team did outscore Spring Mountain 6-0 in the first quarter.

It would be their only score of the game though.

They did that on Jacob Oseguera’s one-yard TD reception for the Hornets.

The Hornets finish the year 7-3 and Spring Mountain is now 7-2. The Golden Eagles travel to Virginia City in the state semifinals on Friday at 7 p.m. The winner of that game plays for the state title, the winner of the Pahranagat Valley vs. Whittell game at Alamo at 6 p.m.