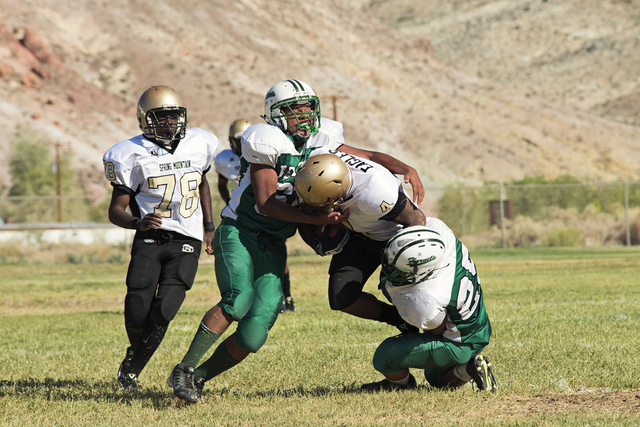 Ask anyone in Beatty if they thought its team would be that close to beating Spring Mountain last week, and they would have probably chuckled. Beatty faced the Spring Mountain Eagles last Friday and lost a tough defensive game, 16-0. The game came down to turnovers.

It was the first game the Hornets played on their makeshift field on the baseball field. The Hornets hopefully will only play three more games there.

Despite the fumbles, the Hornets defense played a good game. Last year the Hornets gave up 54 points to this same team.

“Our defense was good. They only had one drive on us and we had five opportunities to score. We should have won it 30 something to 16. We did well on defense. We have to watch the flat, the running backs coming out for a pass. We got to cover that better. We gang tackled well,” Robertson said. Spring Mountain had two points in the first quarter, six in the second quarter and another eight points in the fourth. The defense held the Eagles to just 254 yards. Spring Mountain had 95 yards on the ground and 159 in the air.

He also said his defense made it tough for Spring Mountain to hold onto the ball. “They had problems with exchanges. They must have fumbled the ball seven times and we recovered only one because we only rushed three,” the coach said.

Against Quest Academy on Friday Robertson wants his offense to hold on to the ball. “The biggest thing we have to do is to put the ball into the end zone,” he said. “We had so many chances to score but we dropped the ball when we should have caught it. In the fourth quarter we had it first and goal and did not make it and we did this two more times and did not make it.”

The Beatty offense had 206 yards total offense. The Hornets offense threw for 133 yards and rushed 73 yards on the ground.

Nye County School District Operations Manager Cameron McRae said the district will be installing new grass on the football field in the spring time. At this time he can’t say what the cost will be or the type of installation it will be. The district is currently looking at hydro-seeding, sod and seed.

The Tonopah Muckers football team crushed Lone Pine with a score of 60-0 and then had another win against Quest Academy, 59-40. At 2-0, the Muckers now prepare for league action at Pahranagat Valley on Friday.

Quest Academy is a new football team from Las Vegas, who could possibly be added to the conference. They are already in the conference for volleyball. This new team brought their best game and almost won the game.

This year in Division IV football there are eight teams with only one new team from Arizona, Beaver Dam. The following schools are in the conference: Sandy Valley, Spring Mountain, Beaver Dam, Indian Springs, Pahranagat Valley (Alamo), Beatty, Round Mountain and Tonopah.

Round Mountain lost to Sandy Valley 40-18 last week and will play Indian Springs this week. The Knights are 2-1 overall and 0-1 in league play.

Alba Amoros contributed to this story.