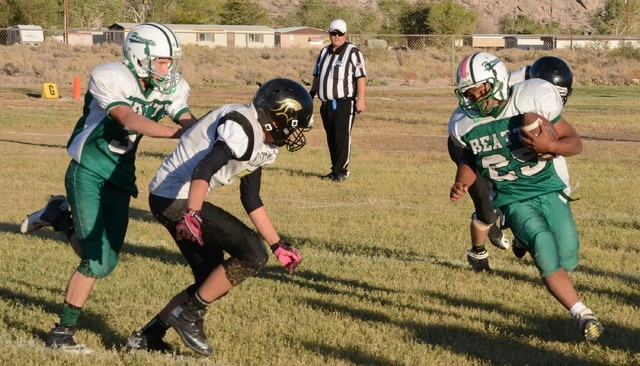 Beatty was up 40-20 at the half when Hornets Coach James Robertson put the second string players in, there was nine minutes left in the third quarter. Beaver Dam scored three more touchdowns to close the gap. “They scored a lot points,” Robertson said. “They had left their first string in to work with another quarterback, but I wasn’t too worried. There was no way they were going to beat us and my second string got to play.”

The Hornets had a successful day rushing the ball against the Diamondbacks. Senior Luis Flores was back at quarterback, but he split the time with sophomore Jhonpaul Adujar, who led the team in rushing with 14 carries for 191 yards and four touchdowns. His longest run of the game was for 70 yards. Flores had seven carries for 83- yards rushing. He also had a kickoff return for an 85-yard touchdown.

According to Robertson, for the homecoming game his team will have to concentrate on shoring up the pass defense. “Our pass defense wasn’t great,” he said. “Beaver Dam was able to go up and down the field on the pass. Our defensive backs have had trouble with the pass all year.”

The coach said his inside linebackers have to be more aware of where the backs and receivers are going.

The Hornets will be fighting for a third place spot, which is now occupied by the Knights.

Spring Mountain (3-2, 2-1) and Beatty are both tied with three games remaining in the season after Friday’s game.