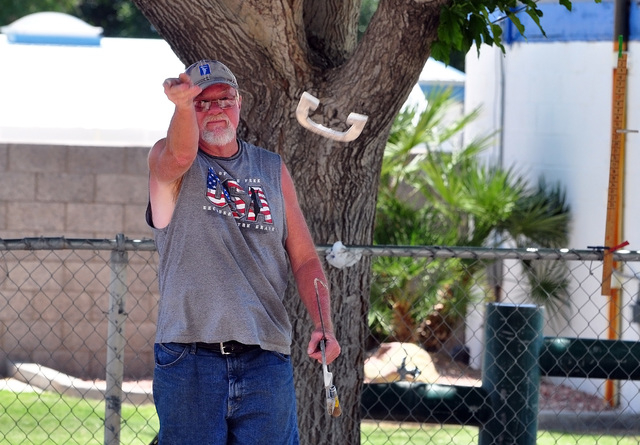 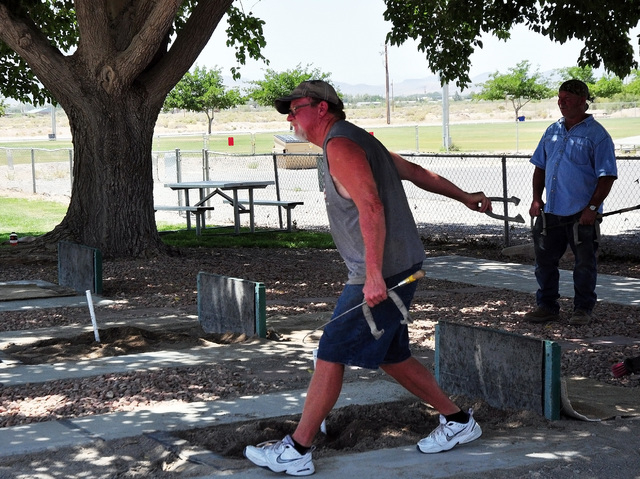 Summertime, a time to relax and unwind and avoid the heat in the area. It can also be a time to play outdoor games, test your skill and get competitive. But it’s so hot you say.

Well, there is this game in Pahrump that people are playing in the shade at Petrack Park. It’s played in a pit and players get ringers and throw shoes around and try to get the shoe as close to a post as possible.

Of course the game is horseshoes and this game is truly a family game.

If you never have played it competitively, go to the park. This is an open invitation.

Every Tuesday and most Saturdays, Don Brown can usually be found at the park throwing and practicing for some tournament from 12 p.m. on. For those wanting to get into throwing in Pahrump, he said this was a great place to learn.

“The group of people throwing twice a week are very friendly and welcome newcomers,” he said. “We always have extra shoes for those who didn’t bring any. We are as open as we can get and love new people. And the sport is not expensive.”

Brown has been playing the game almost a lifetime.

“I have been playing this game for 40 years and I am 63 now,” Brown said. “I started playing the game because of my father. Back then I would watch my family play and it was just for fun.”

It wasn’t until 2004 that Brown said he started playing in tournaments.

He said he just enjoys the level of play at these events.

“You get to meet a lot of different people at the tournaments,” he said. “I also love the competition. I went to St. George for the World and there in Utah upward of 70 people could be playing at a tournament, where in Southern Nevada we get maybe 16 players playing. I will be going back to that next World next year.”

He said he didn’t do that well at the World Horseshoe Tournament.

“It was my first time at a big tournament and so I was nervous,” Brown said. “And there you throw on clay, which is different than throwing on dirt. Nevada is 90 percent dirt. In dirt the shoe will slide more and so you don’t have to be as accurate. It’s easier to throw in dirt.”

He said the Nevada State Horseshoe Pitchers Association changed the rules of the association to meet the needs of the members.

“They changed the qualifying standards because we are so spread out in Nevada,” Brown explained. “To qualify for state a person must compete at only one sanctioned tournament, where in Utah a person has to do three.”

Brown said people who are serious in horseshoes can throw upward of 500 shoes a day.

“I am not that serious and I throw that in one week,” Brown said. “I do that if I am lucky.”

According to Brown, a horseshoe weighs 2.5 pounds and so one can get some exercise throwing them. In tournaments people throw upward of 230 to 240 shoes per game and 5 games per day.

The veteran player chooses to be a one flip thrower. This is where the thrower makes the shoe turn in the air. Most pitchers throw a 1.5 turn flip.

He said throwing is relaxing because you can come down and enjoy the shade in the park and just hang out with your friends.

“My favorite aspect about this sport is that the people I throw with are really good and a lot of fun.This sport has a little of softball and a little of bowling in it.”

To play in sanctioned tournaments, one pays $35 per year to belong to the association. For more information call Mike Norton at 775-537-0542.