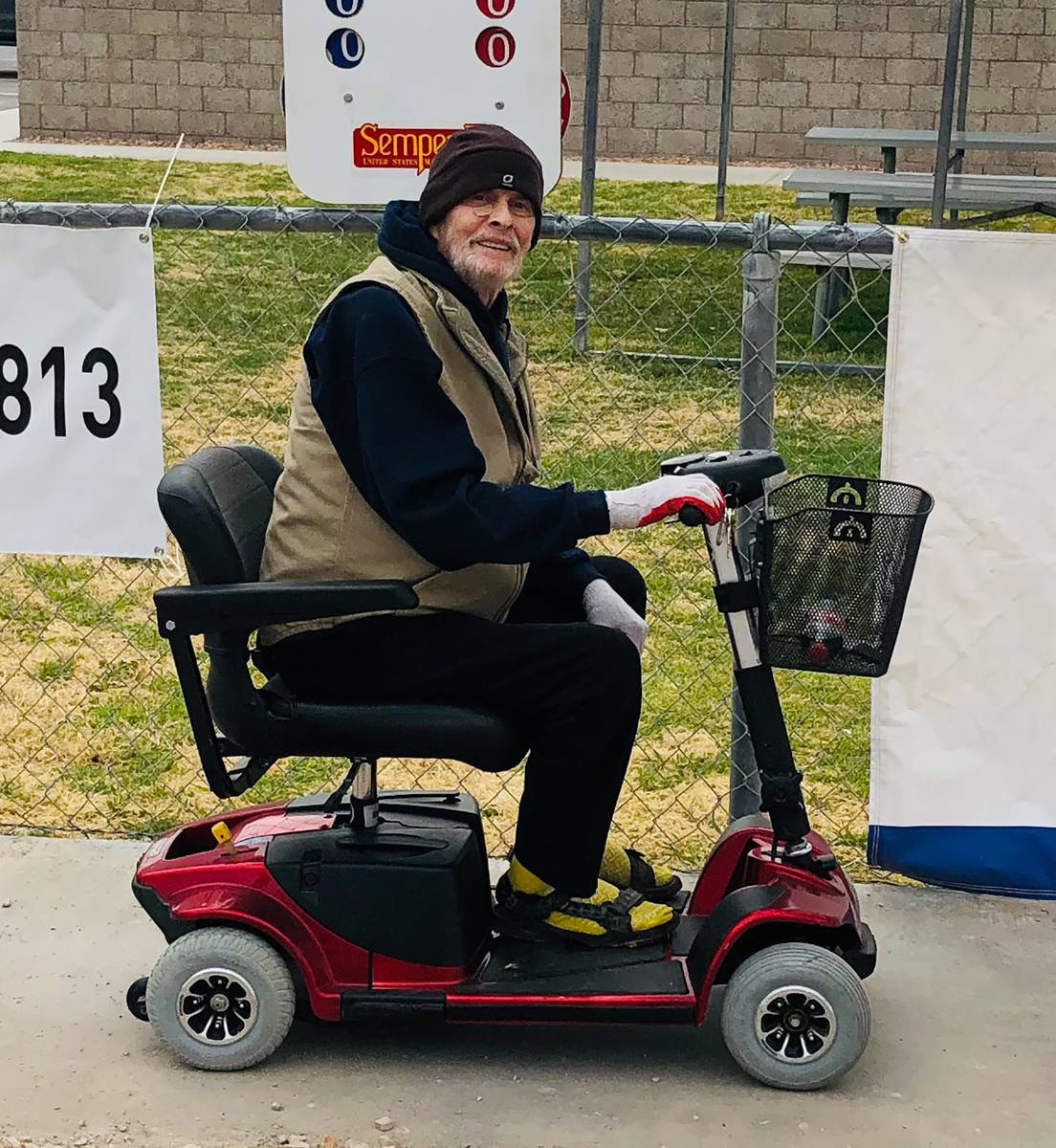 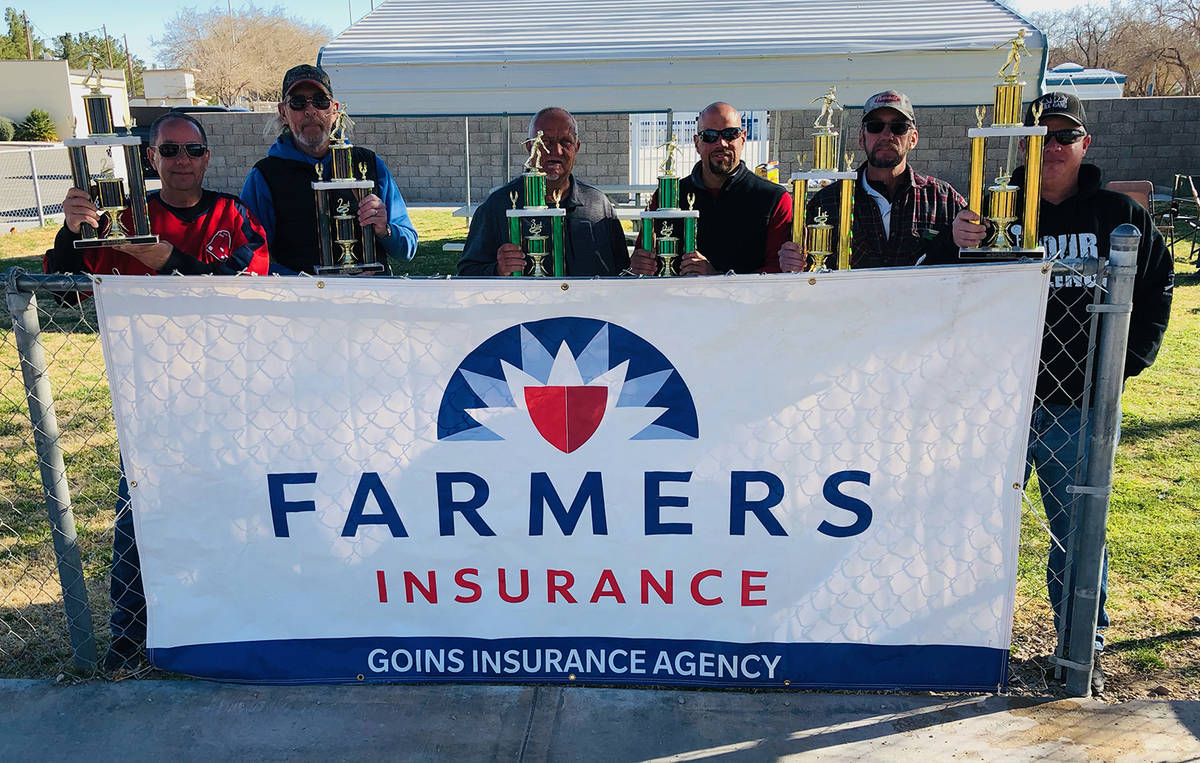 Lathan Dilger/Special to the Pahrump Valley Times From left, second-place finishers Joe Kalache and Russ Jacobs, third-place finishers Mike Dedeic and Rai Adams and winners Jim Hatch and Jeff Witten with their trophies after the Mike Norton Benefit Pitch on March 13 at Petrack Park in Pahrump. 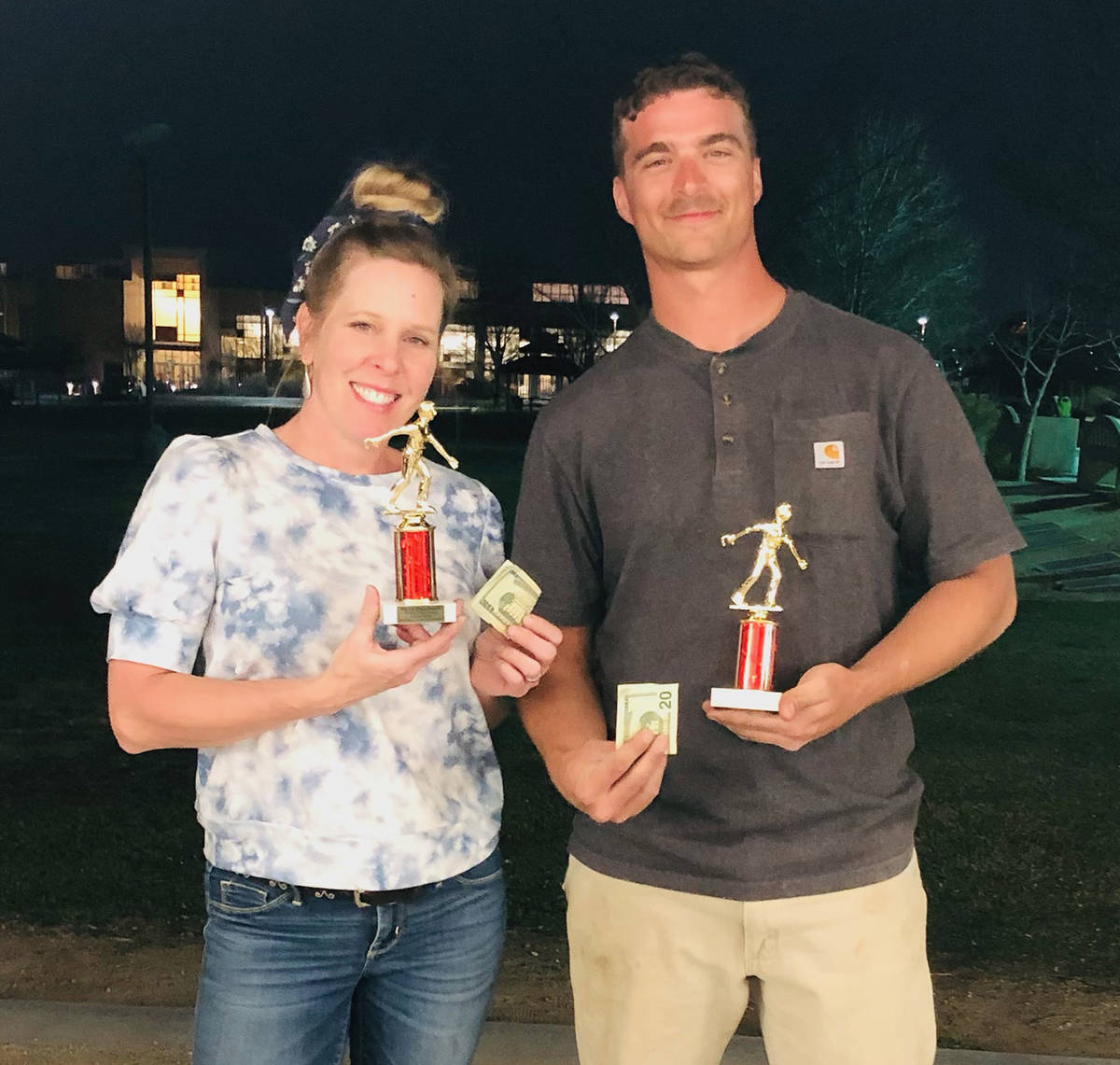 Lathan Dilger/Special to the Pahrump Valley Times Sheri Dilger and Jefferson Counts with their trophies and prize money after they won the most recent Backyard Series horseshoes tournament sponsored by the Southern Nevada Horseshoe Pitching Association at Centennial Hills Park in Las Vegas.

What do horseshoes people do when one of their own needs a little help? Hold a benefit horseshoes tournament, of course.

The Pahrump Dust Devils did just that recently, holding the Mike Norton Benefit Pitch to raise money for the person who most recently was the secretary-treasurer of the Nevada State Horseshoe Pitching Association and the person who ran the tournaments in Pahrump, and often in other places.

“He taught me everything and did a lot for the association for eight years,” said Lathan Dilger, the current NSHPA president. “He ran state for quite a few years, too.”

And local pitchers remembered, coming out to Petrack Park for an event that raised $500.

He said the tournament featured three new players, two from Tonopah and one from Beatty, as interest continues to grow.

Jim Hatch of Pahrump and Jeff Witten of Tonopah teamed to win the Norton Benefit, with Joe Kalache of Las Vegas and Russ Jacobs of Pahrump in second and Rai Adams of Talent, Oregon, and Mike Dedeic of Pahrump taking third after winning a playoff after three teams tied for third in the round-robin tournament.

“It was windy and cold again, but everyone hung in there,” Dilger said. “I’d like to thank our sponsors, Chad Goins and staff at Goins Farmers Insurance for the awesome trophies; Gary at the golfcartnv.com store for donating the much-needed scooter; Sara Gurgol, our director, for all the great work she did; and all the players and friends of Mike’s who donated money to his fund.”

A week before the benefit, an NSHPA-sanctioned tournament, the Las Vegas Spring Fling, was held at Justice Myron E. Leavitt and Jaycee Community Park. The event drew 34 pitchers, which were divided into five divisions based on entering ringer percentages.

Hatch, who had won back-to-back tournament titles in Class B to start the season, moved up to Class A and, with a 76 handicap took the tournament title with a 6-1 record. Bob Swain of Arizona, who went in with a 63.42 ringer percentage, placed second at 5-2, posting 186 ringers in the process, 63 more than anyone else.

The next day was another tournament in the Southern Nevada Horseshoe Pitching Association’s Backyard Series, this time at Centennial Hills Park in Las Vegas. Sheri Dilger and Jefferson Counts were winners of Sage’s Hit The Stake horseshoes tournament. Scotty Heer and Gary Dilger finished second, while Tim McBrayer and Vance Dilger placed third.

Next up for horseshoes pitchers is the Pahrump Spring Open, an NSHPA-sanctioned event requiring a membership card for entry, which can be obtained before the tournament. There is a $15 entry fee for the 9 a.m. event at Petrack Park.