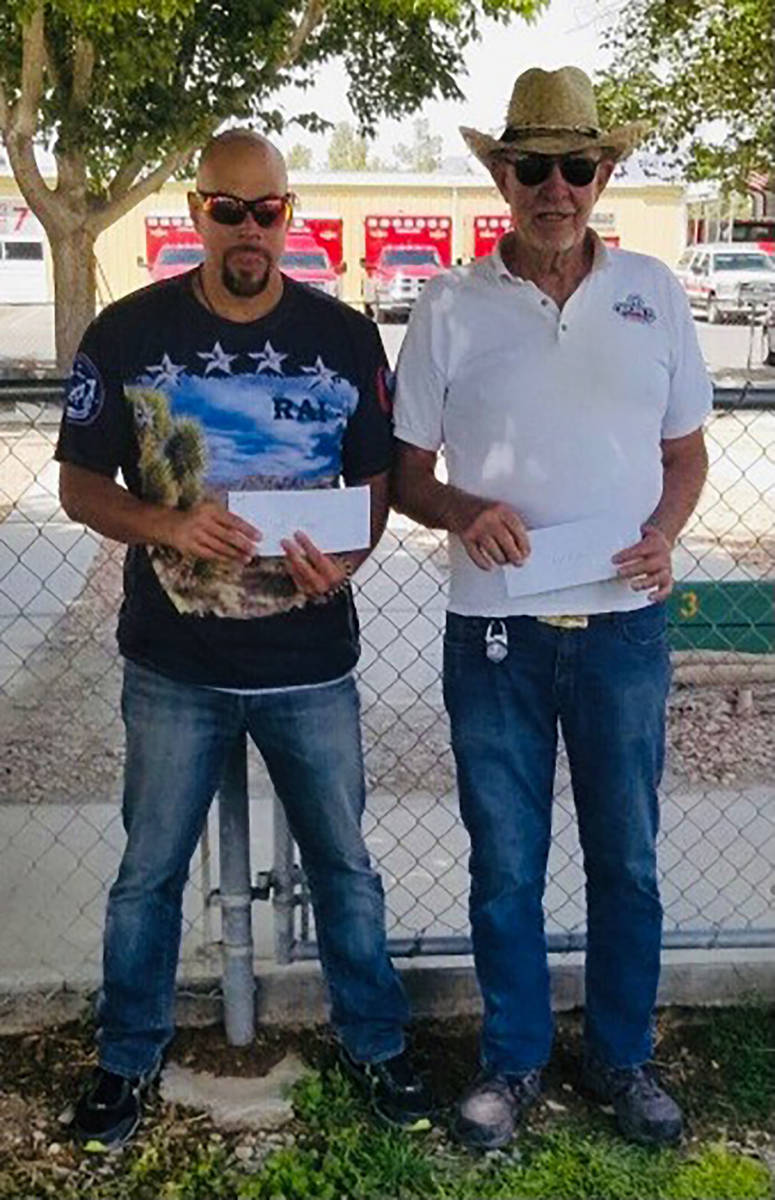 Lathan Dilger/Special to the Pahrump Valley Times Rai Adams and Bob Miller won the tournament championship April 24 at the Pat Chartier Memorial Tournament at Petrack Park's horseshoes pits in Pahrump. Adams went on to claim the bronze medal in Division B at the Mesquite Open a week later with a 6-2 record. 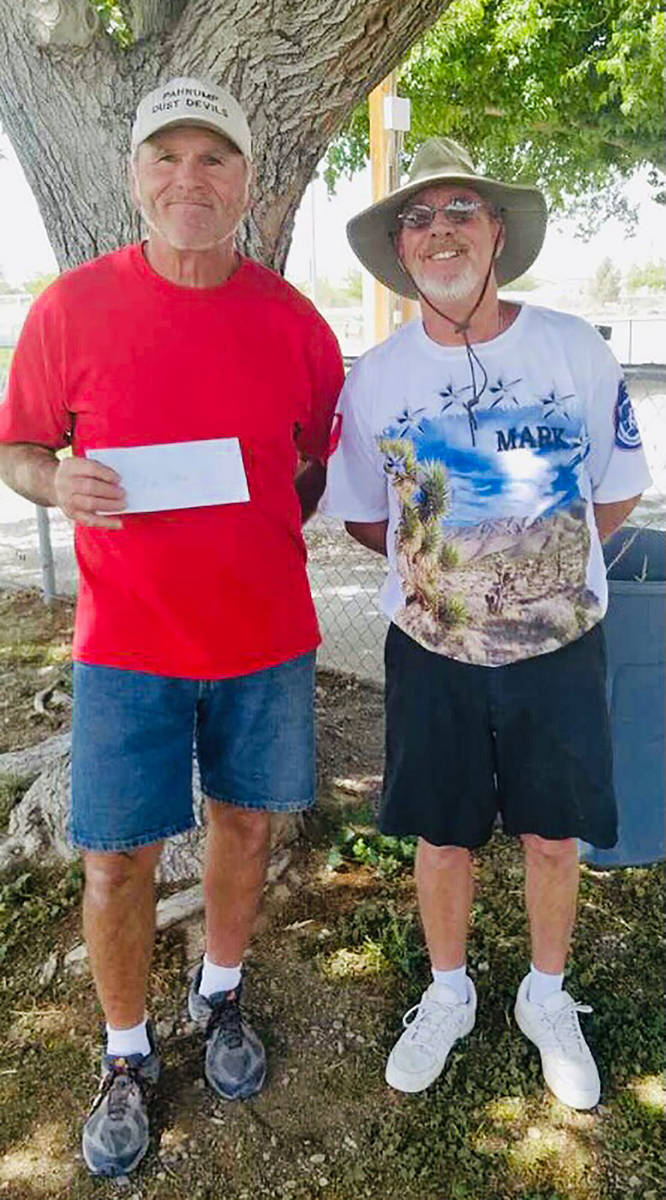 Lathan Dilger/Special to the Pahrump Valley Times Mike Nicosia, left, and Mark Kaczmarek finished second at the Pat Chartier Memorial Horseshoes Tournament on April 24 in Pahrump. A week later, Nicosia finished second in Division B at the Mesquite Open. 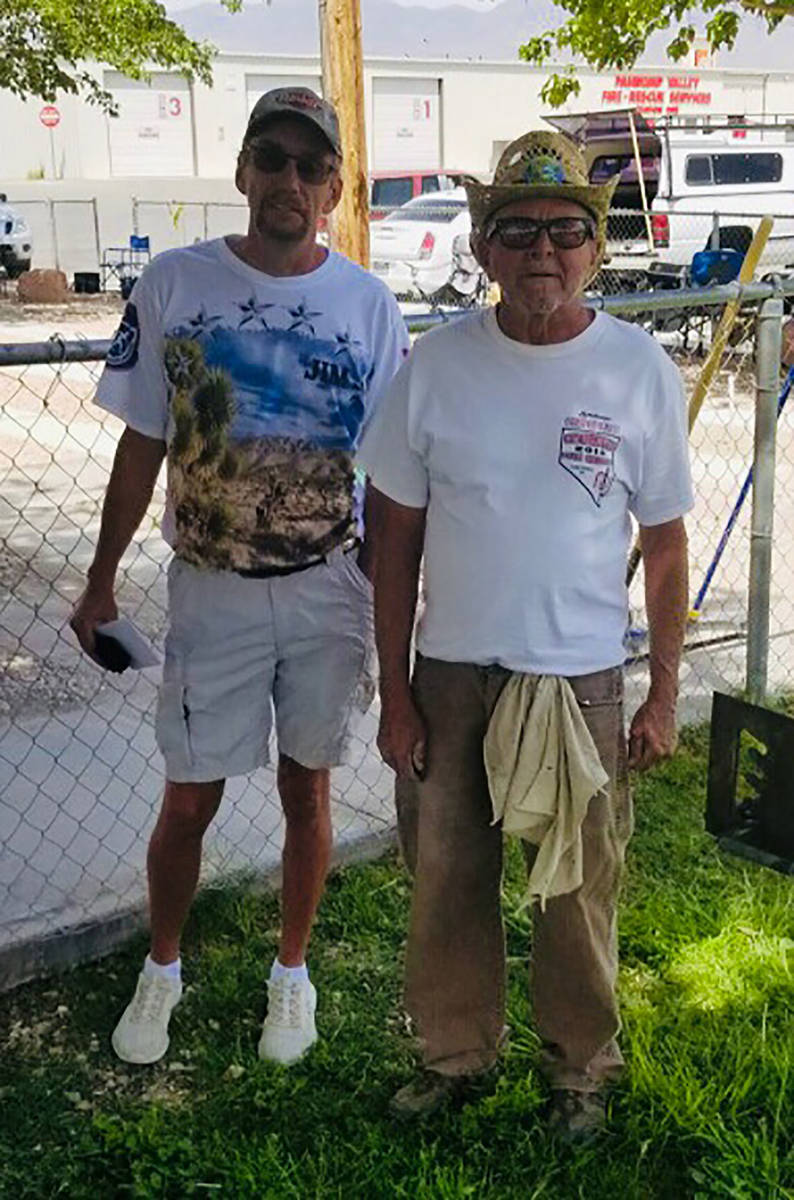 Lathan Dilger/Special to the Pahrump Valley Times Jim Hatch, left, and Chuck Smith took third place April 24 at the Pat Chartier Memorial Horseshoes Tournament at Petrack Park in Pahrump. Hatch then finished third in Division A of the Mesquite Open and teamed with Dave Barefield to go 5-2 and win third place in the doubles tournament.

The Southern Nevada Horseshoe Pitchers Association event was run in conjunction with the Mesquite Senior Games, although it was open to pitchers of all ages.

Steve Lopez of Kingman, Arizona, defeated Jim Hatch of Pahrump in a playoff for second place after each went 6-2 during the round robin.

Pahrump Valley High School alum Kasey Dilger went 7-1 and defeated Mike Nicosia of Pahrump in a playoff to win in Division B, with Rai Adams of Pahrump going 6-2 and taking the bronze.

Pahrump’s Mike Dedeic went 6-2 to tie for second in Division C but lost a playoff to Larry Workman of Henderson. Anita Sorenson posted a 7-1 mark to win the division.

Nicosia then teamed with Rains to win the Mesquite Open doubles tournament, A-B Division. A and B pitchers competed together, teamed by a draw of cards, and C and D pitchers did the same. Don Brown of Pahrump and Lopez went 6-1, losing only to Nicosia and Rains, to claim silver in A-B, while Hatch and Dave Barefield of Pahrump went 5-2 to claim the bronze.

DJ Zuloaga was the only Pahrump pitcher to medal in the C-D doubles tournament, teaming with Verlin Windedahl to share the gold medal with a 6-2 record. There were no playoffs to break ties in doubles.

“We had 38 players in the singles and 34 players in the doubles,” Dilger said. “I would like to thank Sandy Tudor and Sara Gurgol for helping me with the Mesquite tournament, the city of Mesquite, the Rising Star Sports Complex and the Mesquite Senior Games for all their help.

“And I would like to thank all of the volunteers at the Mesquite Open. Can’t forget them.”

A week earlier, the Pat Chartier Memorial Tournament was held in Pahrump, hosted by Dennis Andersen.

“Pat was a very nice lady who came to a lot of our tournaments here in Pahrump and Las Vegas,” Dilger said. “She was one of us.”