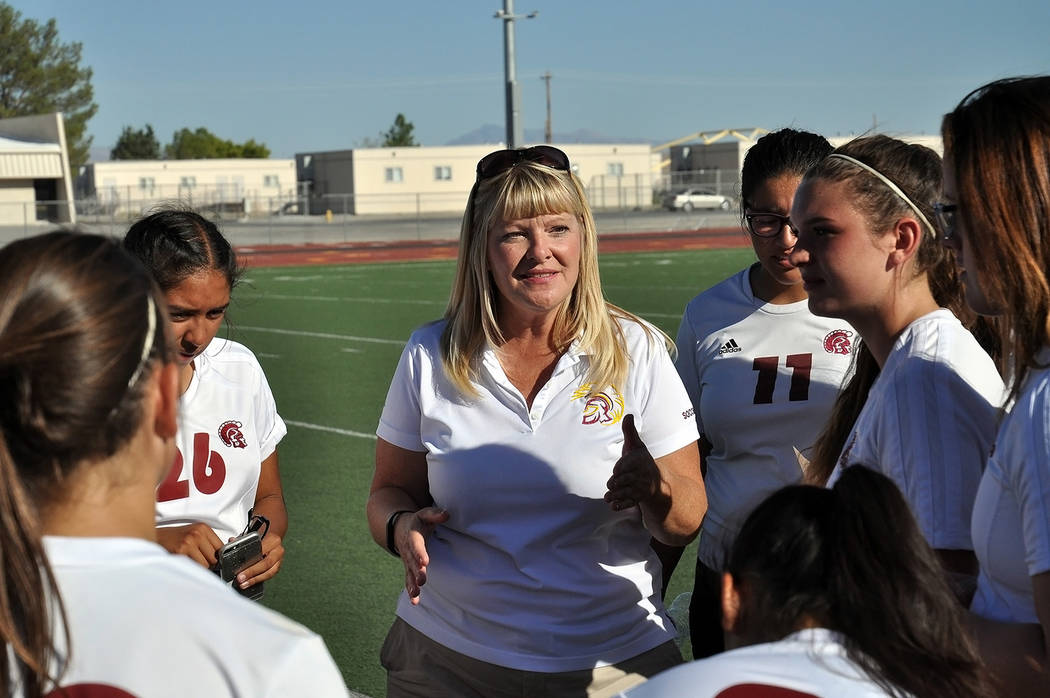 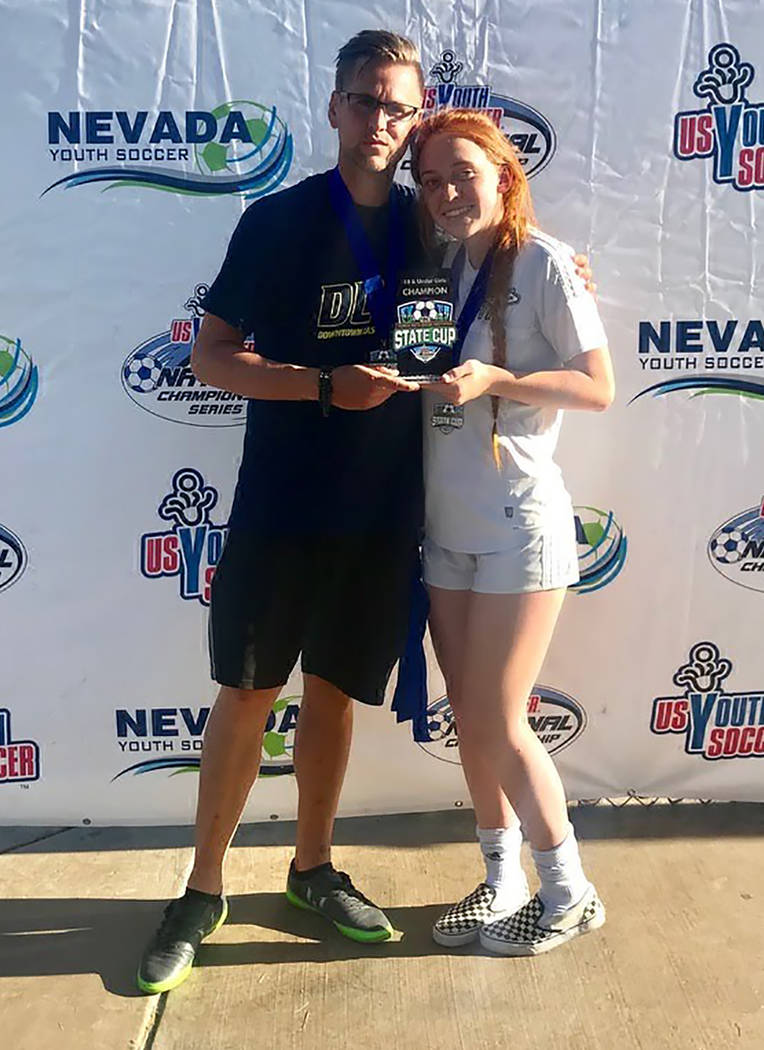 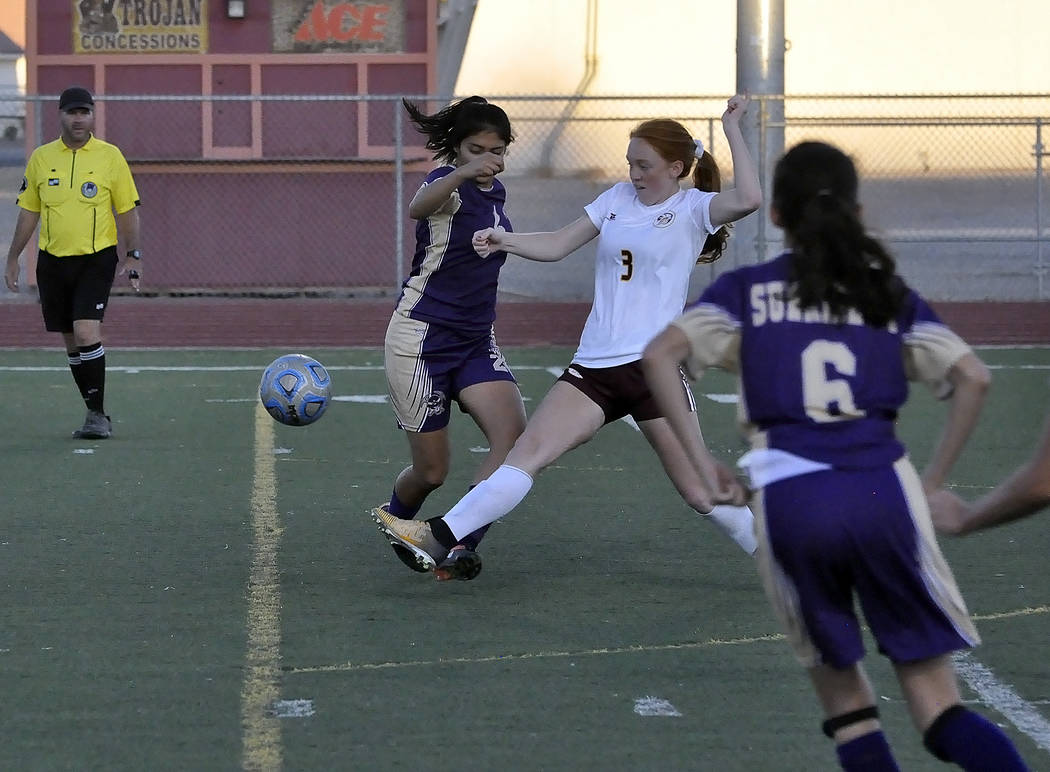 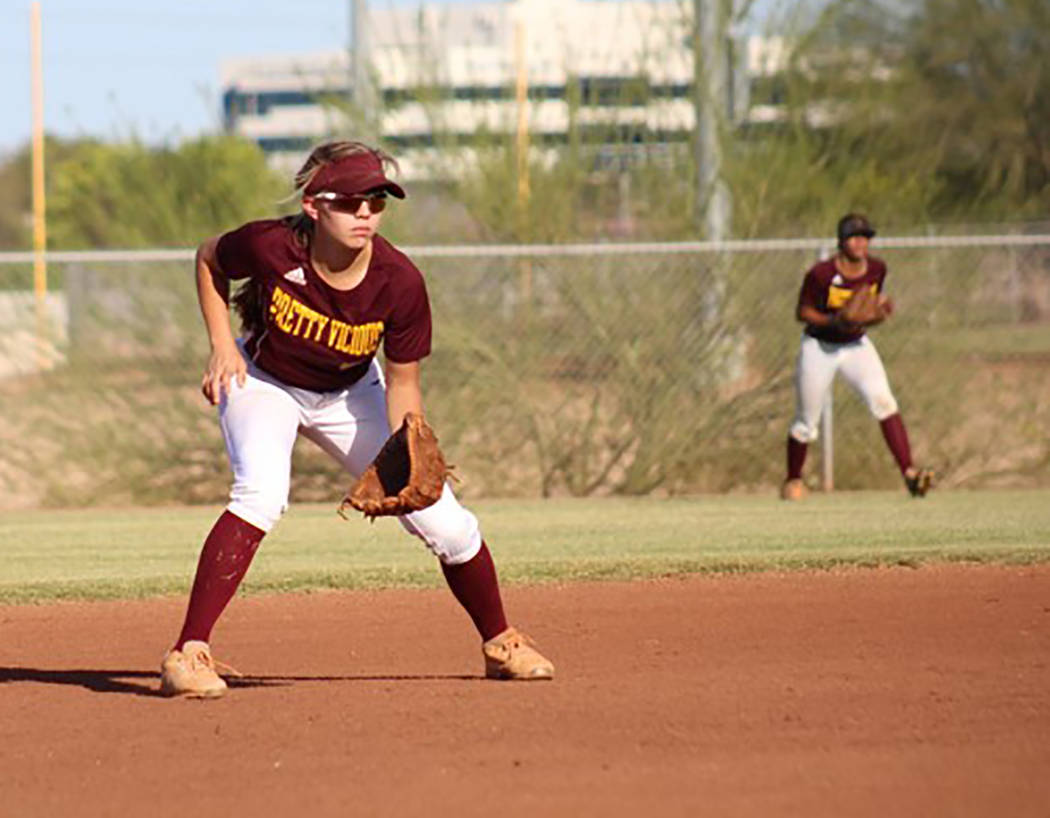 Cassondra Lauver/Special to the Pahrump Valley Times Skyler Lauver at shortstop for the former Pretty Vicious softball club, which was coached by her parents. 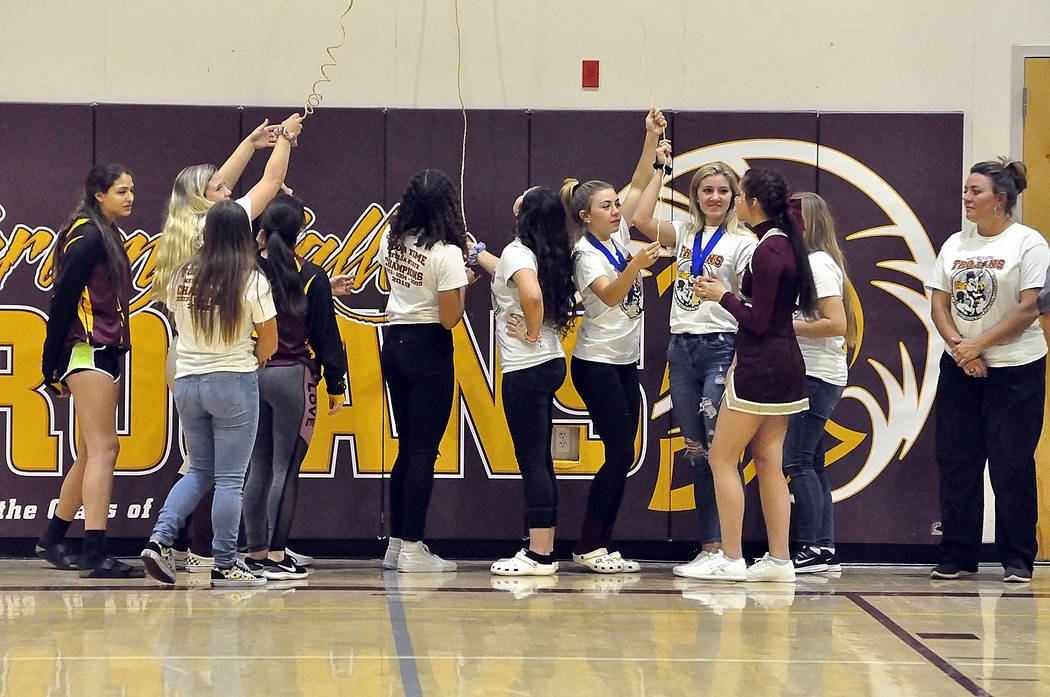 This is the fourth part of a series taking a look at the impact of club sports on high school athletics.

Julie Carrington coaches a very successful girls soccer team at Pahrump Valley High School. The Trojans have reached the Class 3A State Tournament twice in the past three years, and last year they went undefeated in the Sunset League and reached the region tournament.

Imagine how much better the Trojans would be if all of those players played soccer all year. But Carrington wants no part of that.

“Playing as many sports as possible improves your foundation,” Carrington said. “My best keepers have been basketball players. I think it’s about depth perception, but that’s just a guess.”

Cassondra Lauver coaches a very successful softball team at Pahrump Valley High School. The Trojans captured their first state championship since 2005 during her first year at the helm last spring, beating Lowry once and Fernley twice in Mesquite after going 0-6 during their past three trips to the state tournament.

Imagine how much better the Trojans would be if all of those players played softball all year. Lauver would be OK with that, if that’s what the players wanted to do.

“I also think kids should be able to explore all different kinds of activities, sports and otherwise,” Lauver said. “If, along the way, they discover that they are passionate about something specific, or that they seem to have the potential to become very talented in that something, it seems that it’s natural to want to spend all of your energy committing to getting better at that sport.”

But Carrington and Lauver also are mothers who have coached their daughters, and each has found that supporting your daughter sometimes means not pushing them to do what you want them to do.

Kaitlyn Carrington was an outstanding soccer player at PVHS. She was second on the team in scoring as a junior and led the team as a senior, and the players in her class closest to her on the leader board — Sydney Dennis, Kathy Niles and Vaniah Vitto — are playing college soccer.

But while Niles also played softball and Dennis also ran track, Kaitlyn Carrington had decided soccer was her sport before she ever got to high school, much to her mother’s dismay.

“I started her in softball, she wasn’t happy with it,” Julie Carrington recalls. “I started her in volleyball, she wasn’t happy with it. I really liked softball, so that’s what my goal would have been for her. Having her only liking soccer was a personal choice. That was not my choice as a parent. I wanted her to do multiple sports, because you meet multiple people. It’s about networking, trying different things.”

Lauver’s daughter, Skyler, is a senior at Pahrump Valley, and unlike Carrington she did not stop playing other sports by the time she was 11 years old. The younger Lauver played volleyball throughout middle school and played basketball through her sophomore year.

“It wasn’t about pushing her to be any superstar athlete or excel in any sports,” Cassondra Lauver said. “I wanted her to go experience it and see what she liked to do. I wanted her to be involved.

“She’s an only child. It’s a great way to learn how teamwork works, how to be part of a team, how to take directions from other people and how to do your part on a team.”

But while Carrington wishes Kaitlyn had stuck with multiple sports, Lauver was fine with Skyler’s decisions on when to give up other sports.

“While I would encourage kids to try out all kinds of sports, by the time a person gets to high school, they should start thinking futuristically,” Cassondra Lauver said. “If there is a chance for an athlete to become elite at a sport because of their natural ability, possibly play at the next level, if that’s their desire, and the opportunity to help them achieve their goals presents itself, I feel that every adult in that athlete’s life should be supportive of what he/she wants accomplish.

“If that means the athlete specializes and chooses not to play other high school sports, then we should support that athlete. But if it means that they do not want to specialize, that should also be supported.”

Lauver knows of what she speaks. Everyone walking through the door nearest the gymnasium at Pahrump Valley High School can glance at the plaques on the wall honoring the school’s male and female athletes of the year. And right there, dated 1995, is Cassondra Tudor.

“My mother was a cheerleader, but my dad played football, basketball, I don’t know if he played baseball or not, but I think that’s what pushed me into that realm. My parents did it, and they wanted me to be involved in something. I didn’t play any sports at all until I got into high school. I wouldn’t say I was the greatest by any means, but I hustled, I worked hard and I had a good time.”

Lauver says she wasn’t the greatest by any means, but what about her name up on the wall for all to see?

“I don’t know,” she said. “I had a lot of great teammates, and most of them I’m still in touch with. I started on most of the teams that I played on, but I don’t know. I just was picked.”

Skyler Lauver has played the same three sports as her mother — Cassondra Lauver was her volleyball coach at Rosemary Clarke Middle School — but slowly came to focus on softball.

“When she decided that she didn’t want to play (volleyball) in high school, I was like, if you don’t want to play, that’s fine,” Cassondra Lauver said. “We need to find something to fill that time. I don’t want you to be a part of nothing.

“At that time people took it as, oh that’s so odd because she’s been playing all these sports all this time. How come all of a sudden she’s not going to play? There was no, ‘Oh her parents are making her decide.’ ”

By that time, the Lauvers also had coached their daughter on a club softball team, Pretty Vicious. At its peak, the club fielded two teams, but it was down to nine players by the time it disbanded, the entire team crying after the final game, Skyler Lauver said.

She still speaks fondly of that group of players, quite a few of whom she is coaching again at Pahrump Valley High School.

“I don’t think it became much of an issue until high school started. We were having a fall season, and we tried to make it to where our practices would not coincide with other sports’ practices. They were committed to their high school sport, so that was the sport you needed to be a part of, you need to go to that practice, you need to go to that game, and when you can make it out here, great.”

While Lauver is perfectly happy to see her daughter focus on one thing and try to be the best she can be at it, Carrington always hoped her daughter would play something other than soccer.

“Her body would have been more in tune to do multiple things,” she explained. “Soccer can train you to do a lot of things, but it can’t give you the footwork that basketball can. You have to move and change directions so quickly, and it helps you for the soccer field. Even track, for running, which would teach her to open up her lungs.

“I wish she would have done that, but as a parent I wanted to support her in something she loved and was actually good at.”

That feeling of supporting kids goes beyond each of their daughters to other young athletes they coach.

“If a girl came to me and has a natural talent, and they really loved the sport, and soccer was over and they weren’t going to do anything else, then yes I would have encouraged them (to play club),” Carrington said. “But I really promote the high school sports, because that’s going to stay with them a lot longer than ‘I played on a Vegas club team.’ It doesn’t give you that sense of who we are, and playing for a high school team does that, and I think they need that in this day and age.

“But I want kids to do something. If you are going to be a basketball player, go play basketball. If you’re going to do nothing, then go play club soccer. More than anything, having them play a sport means they’re not sitting at home playing video games or smoking pot.”

“I think if a kid just loves something — it could be playing an instrument — something they have an undying passion for, if that’s in their hearts, support your kid,” Lauver said. “I want her to be happy in her heart.”