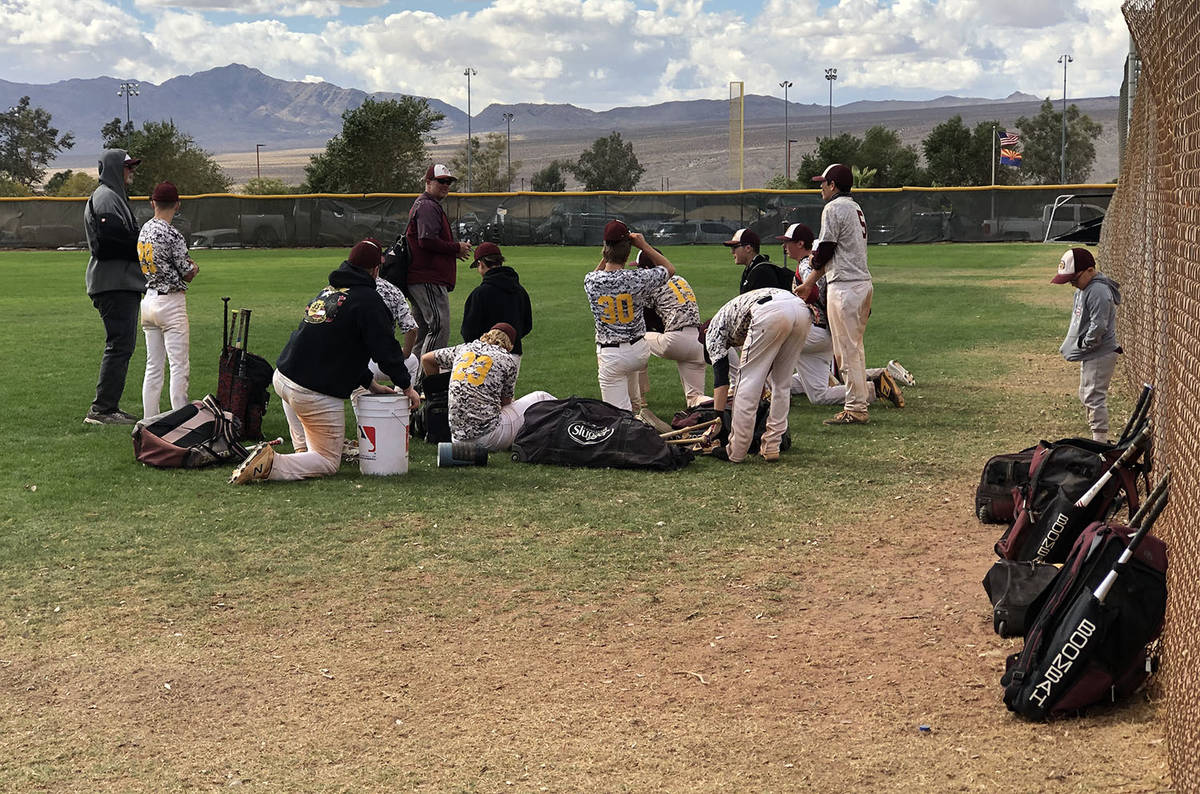 Tom Rysinski/Pahrump Valley Times Pahrump baseball coach Brian Hayes talks to his players at the conclusion of their weekend tournament on Sunday in Bullhead City, Arizona. The Trojans won one of four games during the event. 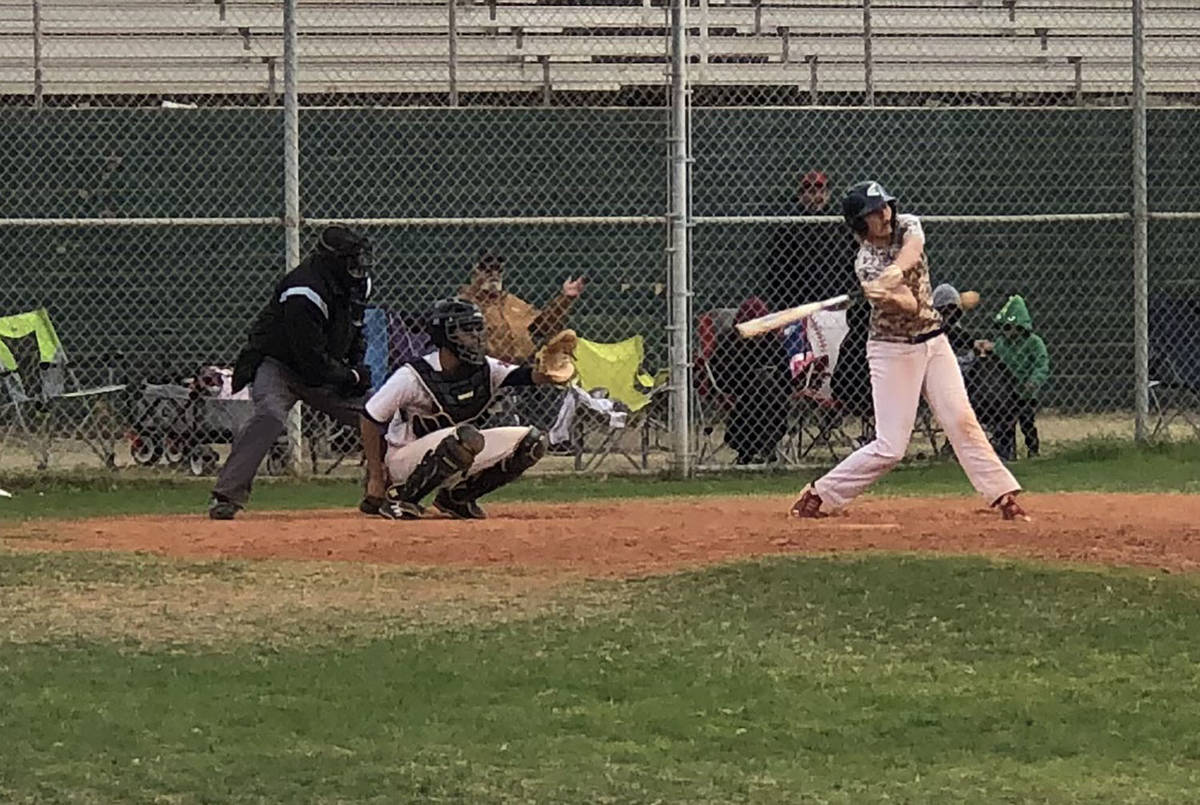 Tom Rysinski/Pahrump Valley Times Scott Oscarson keeps his eye on the ball as he bats for Pahrump Trojans Maroon during their 5-0 loss to Redlands Bulldogs Red of California on Sunday in Bullhead City, Arizona. 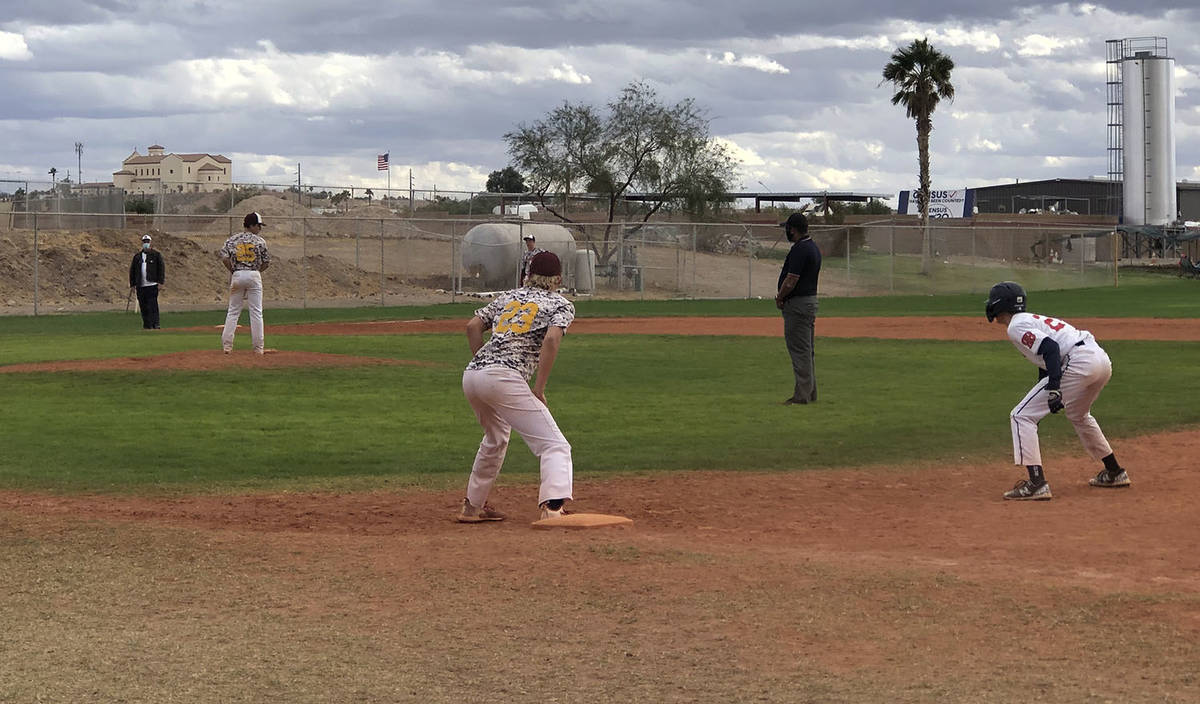 And while that doesn’t make coach Brian Hayes do handsprings, he’s kind of OK with it, as the pandemic, as it has in so many other areas, changed everything.

The biggest issue for Hayes is that the time away from the diamond affected all aspects of the game.

“We’re down 6-0, and we’ve got a guy trying to steal second and then trying to take third, and that’s just inexperience. Those game reps, where you learn this is why you did this in practice, and now it’s the opposite. We haven’t done it in practice yet, and here’s why we’re going to do it later.”

There were a few bright spots over the weekend. The Trojans erupted for 5 runs in the second inning of their 8-7 win over Redlands Bulldogs Blue on Sunday morning, a rally that included singles by Micah Mendoza, Mason Prunchak and Scott Hirschi, who went had 2 hits, 2 runs and 3 stolen bases in the game. Back-to-back singles by Leo Finkler and Austin Sandoval fueled a 3-run fifth-inning rally during a 7-4 Saturday loss to Redlands Bulldogs Red, and Hayes said Finkler delivered solid innings on the mound.

But in every game, examples of the inexperience flared up, and while playing this fall is almost essential given the circumstances, Hayes knows his players, especially the younger Maroon team, really aren’t ready to compete.

“We practiced last year with some of these guys, but there’s not very many of them, and nobody’s been able to put it into a game yet because we haven’t played any games,” Hayes said. “This year, our practices the first part our season were geared toward getting them ready, and now practices have been running into scrimmages so we can get our pitchers ready.

“We haven’t been able to teach them everything we need to teach, and we’re probably not ready to play baseball. You can coach all you want, but if they can’t play any games they don’t understand what they’re trying to do. But they need to play, because they lost all those games. It’s kind of a Catch-22.”

Compounding the problem is that the older Gold team is, simply by virtue of more competition under their belts, more prepared than the Maroon team. That creates an issue at practices.

“Our older team is ready to just play, and our young team isn’t, so you can’t just go in and go through everything step by step with the younger guys, because the older guys are going to fall behind in their reps for the 18U,” Hayes said. “We’ve been under the philosophy that we’re slowly going to get the young guys in, but we really have to make some decisions here soon.”

Hayes is pleased that his players are at least getting time on the field, noting that other sports have not been able to do that. “There’s only so much you can do in the weight room,” he said. “If kids can’t play games, they’re going to lose focus.”

And when high school baseball practice begins (presumably) in January, these fall games will have revealed their value.

The Trojans will return to Bullhead City for the Stars and Stripes tournament Nov. 21-22.