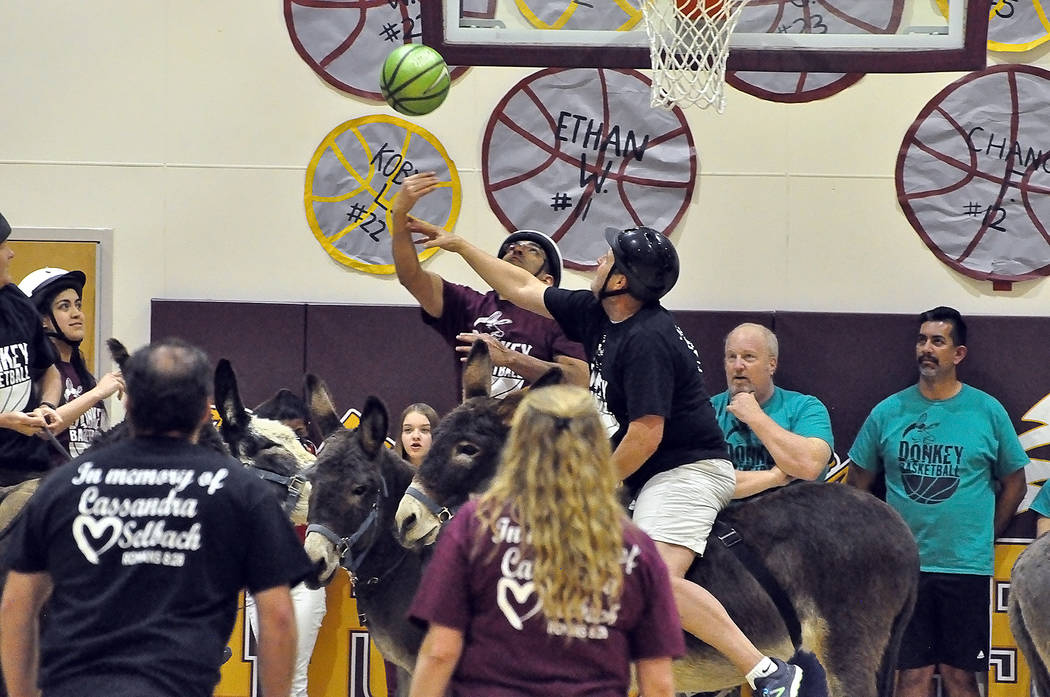 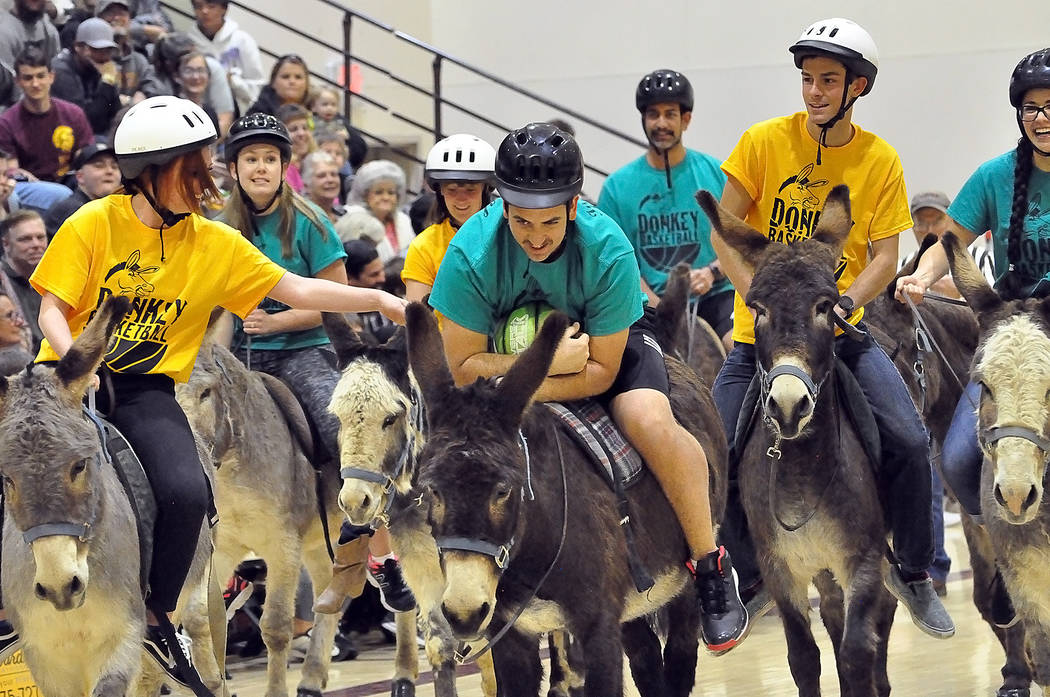 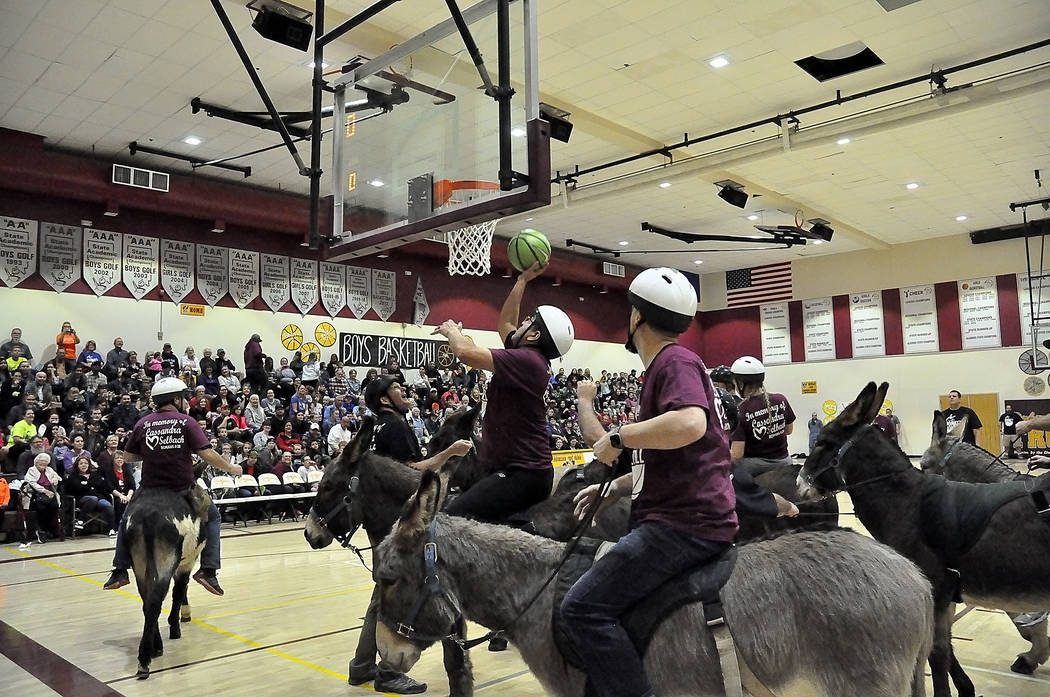 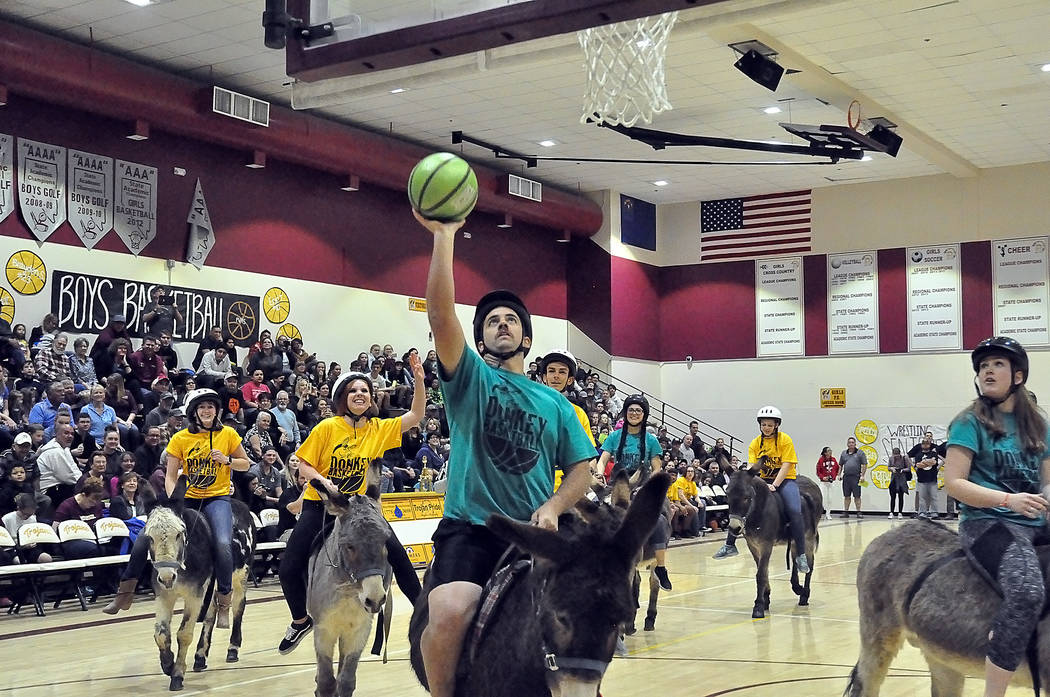 Horace Langford Jr./Pahrump Valley Times A fast break is never a guarantee of a basket in Donkey Basketball, an annual fundraising game sponsored by the faculty and staff at Pahrump Valley High School and Rosemary Clarke Middle School.

The dynasty continued for the It’s On Like Donkey Kong team in Donkey Basketball, and this year’s victory had something special attached to it.

The team made up of Pahrump business community members, It’s On Like Donkey Kong, won the Donkey Basketball championship for the fourth consecutive year, but this was the first tournament since the death of team member Cassandra Selbach.

Selbach, former executive vice president of community relations at Valley Electric Association and a fixture in the community, died Jan. 23 of a systemic autoimmune disease.

Selbach’s brother, DJ Mills, has plenty of memories from his sister’s efforts in the annual game.

“It was always entertaining, but somehow somebody would get hurt, and that was usually Sandy,” Mills said, laughing. “She would get bucked off, or grab the ball and then fall off. But she was quite the competitor … Last year was the first year she was unable to participate.

“They did a moment of silence, which was really nice, and then on the back of all the competitors’ T-shirts they had ‘In memory of Cassandra Selbach,’ and they put her favorite scripture on it. And Tim Wombaker dedicated the event to her.”

And the event, as usual, was a success for its sponsors, Pahrump Valley High School and Rosemary Clarke Middle School.

“We had approximately 700 people attend and raised $2,900 to split between RCMS and PVHS,” said Nancy Berry, the coordinator of the tournament.

Each team played one game, and the two teams that scored the most points competed for the championship.

For the second time in three years, It’s On Like Donkey Kong and the team from Rosemary Clarke Middle School met in the final.

“In the final game, we ended up tying and had to go into overtime,” Mills said. “It was a bit of a nail-biter.”

It’s On Like Donkey Kong won when Selbach competed, won with her on the sidelines and now has won with her memory emblazoned on every donkey rider’s back.

“I like to mention we’re the winner four times in a row, because I like to rub it on Wombaker a little bit,” Mills said.