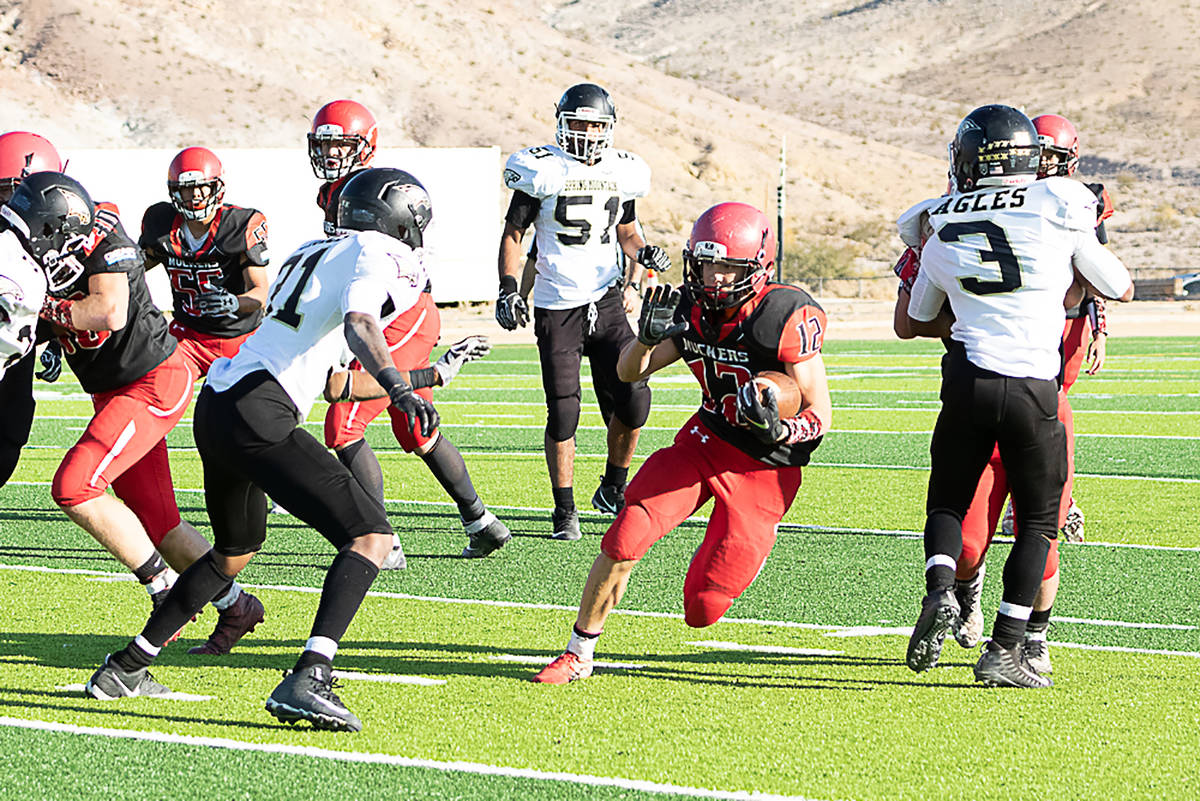 File photo Tonopah High School's Kobe Bunker looks for a hole in the Spring Mountain defense during the 2018 Class 1A state championship game in Beatty. The Golden Eagles defeated the Muckers 60-38. 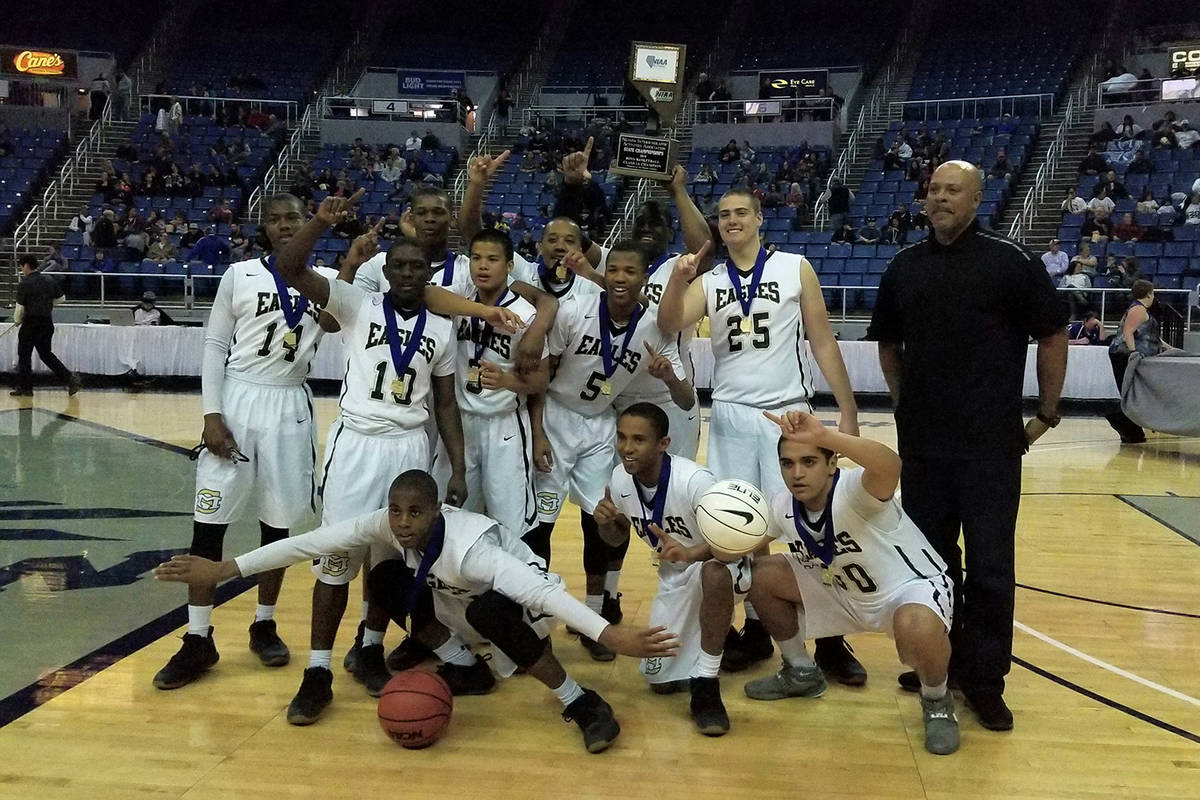 For years, but especially since Aaron Masden took over as football coach, Spring Mountain “High School” has been a thorn in the sides of Class 1A schools in Nevada, especially Southern Nevada.

It’s long past time to do something about it.

Spring Mountain is not a high school in the traditional sense, and while most people who play, coach and administer sports at the 1A level know that, it’s worth pointing out a few details, straight from the Clark County website.

“Spring Mountain Youth Camp is a juvenile facility which houses male youth between the ages of 12 and 18 who have been adjudicated for delinquent acts by the Juvenile Court Judge.”

In other words, it’s basically a pleasant prison. You don’t choose to go there, the county chooses to send you there. And they don’t always succeed in their mission; the starting quarterback on their state championship team from 2018 was shot to death a year later.

That doesn’t happen in Owyhee.

“It sits at an elevation of 8,470 feet and has a capacity for 100 youth. The average length of stay is approximately six months and the average age is 15 1/2 years.”

So it’s a small prison with a very transient population. While a lot of high school students might consider school to be a small prison, most of them stick around for more than six months.

Even at the 1A level, those numbers are crazy. That team should have won a state title, and there’s no way they should have had to play a bunch of prisoners to win one.

Spring Mountain’s presence also screwed Beatty that season, as there’s no doubt the Hornets were the best team in the state not to make the playoffs. Beatty went 6-2, losing only to Pahranagat Valley and Spring Mountain, winning games by scores of 42-6, 30-0, 40-6, 46-6 and 38-0 along the way. That team deserved to be in the playoffs, and there’s no way they should have had to beat a bunch of prisoners to get there.

But back to Spring Mountain’s athletics program. The boys basketball team has not been as dominant, but the Golden Eagles have won league championships in five of the past six seasons, have reached the Class 1A state tournament seven times since 2010 and played for a state title four times, winning in 2015 and 2018.

Baseball is largely a mess, but it’s also a mess at most urban schools in Clark County, where the more suburban schools dominate the sport. Wrestling is hit or miss.

Meanwhile, Spring Mountain “students” grew up in, and if they play a sport for the Golden Eagles they most likely learned sports in Las Vegas, for the most part. They played in competitive Little Leagues and youth football programs. If they reached high school before “transferring” to Spring Mountain, they most likely played for a Class 4A school, which has far better facilities for athletics than a small-town high school can hope to have.

Are you getting the point?

It is blatantly unfair for inmates from a big city to compete against the Beattys, Tonopahs and Round Mountains of the world in sports. You can’t spin it, you can’t justify it, and there’s just no way you can argue this is fair.

And people at the Nevada Interscholastic Activities Association who are capable of human thought classified Spring Mountain as a Class 2A school not long ago. They might have dominated, but at least the Golden Eagles would have been playing teams from towns with a more structured youth sports program. Spring Mountain appealed to be returned to 1A, and the appeal was approved. How? Why? There is no logic to it, so I won’t even try to figure it out. It’s just nuts. And dead wrong.

Let’s make one thing very, very clear: Nobody is suggesting that sports can’t play a role at a place such as Spring Mountain. The structure, the team building, the setting of goals, etc. can prove just as useful to at-risk kids as anyone else. The idea that sports builds character is a crock, but sports can build character, even to the point of returning a low-level criminal back home as a functioning member of society.

And let’s make another thing clear: This is not about race, despite the fact that the overwhelming majority of small-town residents in Nevada are white or Latino and the majority of Spring Mountain kids are black. The racist elements have been on the rise these past few years, and I’m not about to join that crowd. But too often fear of being called a racist or a sexist or anything else-ist have frightened people out of discussing in a frank manner many issues that need to be discussed.

That’s not me, either.

So what to do with the Golden Eagles? It’s actually very simple. Don’t change a thing, just make them ineligible for league titles and playoff berths. They would play a full league schedule, but the games wouldn’t count in their opponents’ records.

Nobody could say those kids are being denied the potential benefits of sports. And nobody could say the small schools are being robbed of their chances at athletics glory, the notion of gathering years from now at a restaurant or bar in town, or maybe at their kids’ games, and telling stories of that championship season.