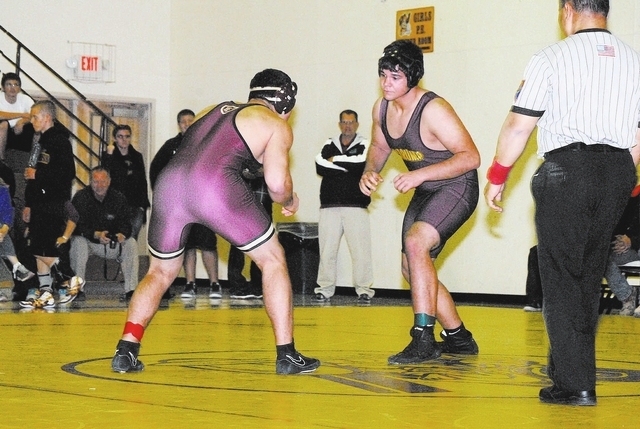 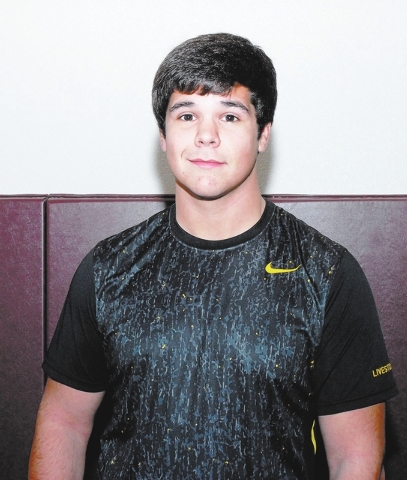 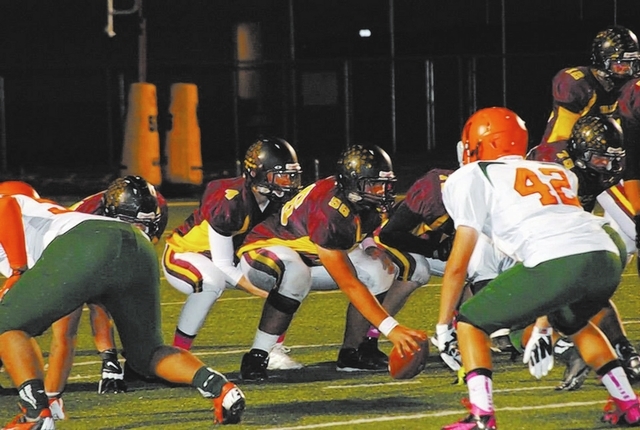 In a time where the teen world is dominated by video games and junk food, Trojans varsity wrestler and football player Jeremy Coates is a refreshing young man who works hard despite the distractions of his day.

Coates has transformed himself from an overweight middle school football player into a premiere athlete in a matter of three years with a lot of sweat and pure dedication.

The young wrestler would be the first to admit that when he was going into middle school he was just a big butterball. In fact, he got his nickname the “angry ogre” because he was out of shape.

“In middle school I got the name because I was 5 foot 5 inches tall and 250 pounds. I was just a big ball so that’s where it came from,” he said.

He has been wrestling since his freshman year at Pahrump Valley High School and he has been playing football since the sixth grade. Coates says football is his favorite sport, but wrestling is a close second.

He likes football because of the camaraderie of his teammates.

“I like the atmosphere of the sport. Everybody is having a good time, you eat a whole lot, there is lifting in the weight room a lot, you hit people, just the whole sport. Also in football you have all your teammates with you and you feel more united with people. With football, you all are on the field at once,” Coates explained.

He likes the team aspect of football and the way everyone on the team works toward the same goal.

“It’s a team sport and everyone has to be on the same page. It’s not like you can point someone out and blame them. The game against Clark was a team effort. The line blocking, AJ running a great rout, TJ hitting him perfectly and AJ making the effort to get in the end zone, ” Coates said.

He said with wrestling it’s all about looking after yourself.

“You are as good as you are going to be and nobody else can mess it up for you. So your hard work doesn’t get thrown away by someone missing their block. When you get a win it’s you getting that win, you get all that glory and you get all the high fives. In wrestling, if you make a mistake it’s all on you.” he said.

With the past seven bouts in a row going his way one would think Coates thinks he is unbeatable.

Not so, says his wrestling coach, Craig Rieger. Although he is one of the toughest wrestlers Rieger has, the coach does not think his young wrestler has this attitude — yet.

“Jeremy just has to believe that he is one of the top 220 wrestlers in the state,” Rieger said. “He has been wrestling great. He went 5-0 on Saturday. He is wrestling well and he has both Claytons on either side of him, so he has great practice partners to push him. He has to believe that he is that stud, that big 220-pound athlete. I don’t think he sees himself in that weight room as a big strong guy. Our goal for him is to qualify for state and see. The people who were in state know about the Clayton boys, but not Jeremy. He is kind of a sleeper.”

In response to Rieger, Coates said he tries to listen to what his coaches are saying.

“It’s true I am a technician, I over-think things a lot during a match,” he said. “Things just race through my mind. I think about everything I could do to get out of that position. I think a lot. I am not going to try to force a move if it’s not there. This last meet I got wins in all different kinds of pins and I just took what was given to me. I don’t think the coach wants me to be too aggressive. They will be able to exploit that in a trip or a head lock, or use your own momentum against you.”

The single leg takedown is his favorite move. He said he likes this move because it is so versatile. He says you can go from a single to a double leg or you can just trip the other person and it’s reliable.

The wrestler believes his hard work and dedication in football has made him a better wrestler.

“My freshman year in football we did not do much on our feet. In my freshman year of wrestling, I was tripping all over the place crossing my feet. The years of football with the footwork helps a lot. At the last home meet when I did the lateral drop my foot work is what got me there, or else I would tripped over because of how hard the other guy was pushing,” he said.

Coates wants to go to college after next year. He says he plans on going into the medical field and eventually moving away from Pahrump. He said his family is originally from the Florida and Georgia area and that is where he might end up.