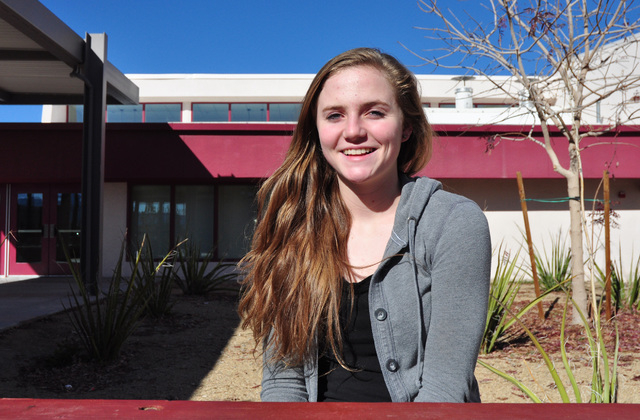 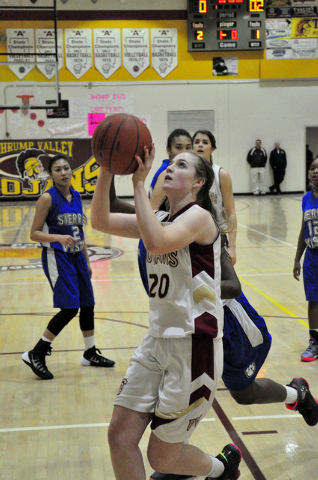 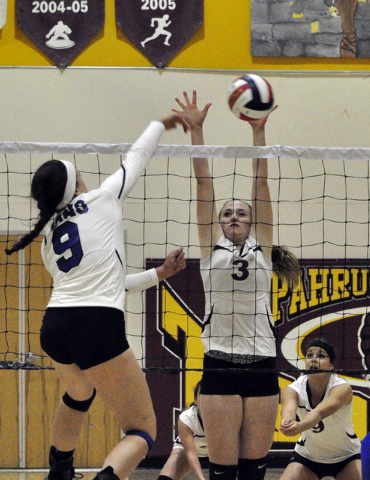 As a sophomore, Jill Smith is making a difference on three teams for Pahrump Valley High School. Smith is a highly focused athlete for her age and is in her second year as a varsity player for volleyball, basketball and softball.

She is an athlete with dreams of someday playing at the college level.

“I would like to play volleyball in college if I can. My parents are pushing me to go to college, along with my coaches,” Smith said.

She spends her summers going to college camps in volleyball, but she could easily go to a softball camp or a basketball camp if pressed and end up playing one of those sports in college, that is how skilled she is. Her dedication during the offseason and her competitive spirit is what makes her excel in sports.

“She got our attention as a freshman because of her size (a five-foot-10-inch volleyball player is hard to ignore) ,” said Kirkwood. “As a freshman we put her as a hitter but then we switched her out as a setter. She has good hands and she has adopted well to that position. She does well at that position because of her intelligence and her ability to think about what’s coming at her.”

Despite being in the middle of a losing season in basketball (2-13 overall, 0-8 Sunset League), Smith has a positive outlook on the season.

“I am really competitive with my sports,” Smith said. “We have the opportunity to succeed. I try to support my team the best way I can. Since I do multiple sports, I tend to think of only the sport I am playing at the time. I will not be thinking softball until the end of the season. It is in the back of my mind.”

At the moment her focus is on finishing the basketball season. This is a sport that she started when she was in the third grade.

“Physically, I enjoy basketball because it is pretty demanding. I think basketball is the most physical of all the sports I play,” she said.

Kirkwood says she is learning to be aggressive in basketball. She leads the team in rebounds with 81.

“I really can’t say what my favorite sport is,” Smith said. “I love them all. I can’t even say which sport I am the best at. These sports are completely different. I like them all.”

Her basketball coach, Jennifer Hagstrom, loves the way she competes and how hard she practices.

“Jill does all of the dirty work, doesn’t get intimidated, and works tirelessly to be an impact player,” Hagstrom said. “She is a very coachable young lady, and tries to put the things we do in practice into her game play. Basically, Jill has come in and in a very business-like manner, has been a professional student-athlete in her approach to practice and competition, which I feel makes a positive impact on our program.”

Smith grew up playing sports in Pahrump. She is one of two siblings. Her brother, Jake, is already graduated and played baseball. By the time she was 5 years old she had already started kicking a soccer ball around and playing T-ball. She played soccer until she entered high school. She then made the decision to play volleyball.

“My whole family has done volleyball before and I thought it would be nice to do volleyball too,” she said.

Her athletics has also taught her that academics are just as important. She knows she has to keep her grades up and works hard to do so. According to the high school, she is number one out of 309 students in her class and she is taking all honors classes.

“She has A’s in everything she does.” said Kirkwood.

Hagstrom added, “I feel that her scholastic abilities help her out, as she is a very strong and driven student in the classroom.”

In softball, Smith’s team went to state last year with her behind the plate. An injury kept her out most of the season, but she played at the end.

She loves catching behind the plate.

“I hope to be catching again, but that is up to the coaches,” she said.

“I like catching because I get a lot of touches on the ball and I like the feeling of control that goes with the position. I also like being able to see the whole field.”

Her coach, Elias Armendariz, had this to say about his player, “She gives us consistency behind the plate, defensively. Looking forward to giving her a try at first base because of her height.”

Smith has her eye on returning to state this year in softball.

“I think we can definitely go back to state. I was extremely happy we beat Faith last year,” Smith said.

Wherever Smith plays during the softball season, she will be an asset for the team.