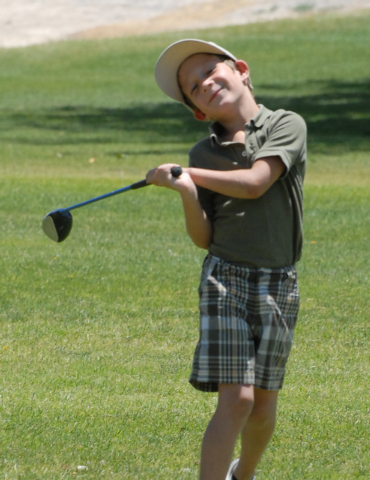 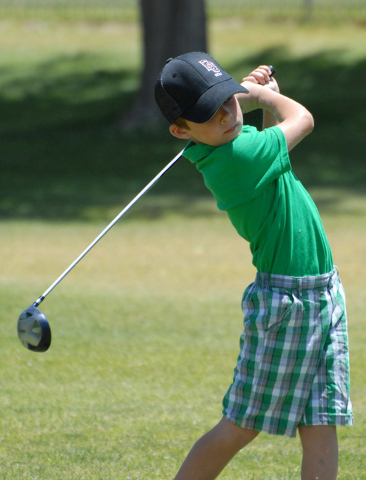 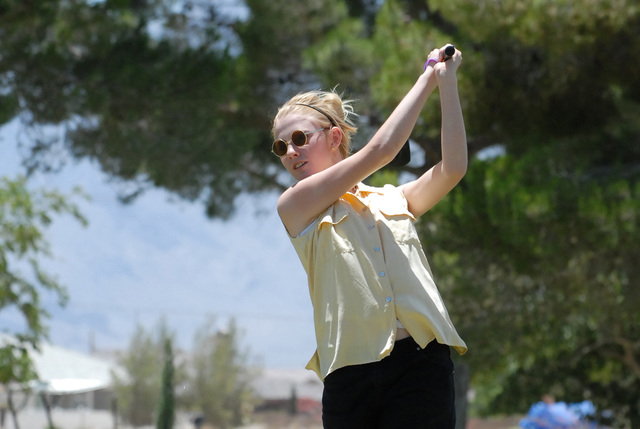 The Pahrump Valley Junior Golf program is back and is as strong as ever. Long considered to be the main source of young golfers in the valley, the program under Frank Cox, former Willow Creek Golf Pro, has been a driving force in the valley to get kids interested in golf.

This summer Cox has put together a well-rounded summer program, which has an aggressive schedule from now until July 29. Every Monday 30-40 young golfers will compete in tournaments at Lake View Executive Golf Course. The tournaments start at 1 p.m. with a $20 PVJG registration fee and a $5 tournament fee. The first one was last Monday. All proceeds from junior golf go to a scholarship fund for young golfers.

“This summer we got a good number of kids involved and a really good age spread from age 6 all the way up to high school aged kids. Basically if the kid can play we want them,” Cox said.

He said kids can still sign up for the weekly tournaments. The summer culminates with the ending tournament, the Gene Goins Memorial on July 28-29.

The director will also be doing some Saturday teaching and this will be every other week and he will announce times to the golfers on Mondays.

To make things fun, the kids will be divided into teams and this will be something new. The teams will consist of all age groups.

Larry Goins, a PVJG board member, explained the teams. “We will have eight kids on a team and two from each age group. We will then count the lowest score for each age group on the team to determine the winner of each tournament.” The whole idea is to increase participation so the kids will enjoy it more.” He said junior golf exposes kids to the game and one of the goals is to make the kids long-time lovers of the game.

Junior golf has been a life line for the Trojans golf teams. Goins said the program has been responsible for the past successes of the Trojans. “If you go through the history of our high school teams, the really good golfers like Elliot Owens all come from junior golf,” he said.

Natalie King is a current junior golfer and is also on the Trojans golf team. She was at the tourney to work on skills she will need in the fall.

“Over the summer I think my chipping is my biggest problem. I’m hoping to work on my chipping this summer. As long as I can get it on the green I should be good. My putting is pretty good,” King said.

Cox said one of the girls on the golf team at the high school to watch is Courtney Berry.

“Courtney Berry has the best technique. Whoever is going to be successful are the girls who do the work and that is yet to be seen. It will be a change of regimes with Julie Floyd retiring and Bob Hopkins taking over. Julie has done a great job. Bob is going to try to get the girls going in the summer and going all year long. Whoever in that group steps forward will be the one to lead. Courtney can be a good player, but she has to do the work,” Cox said.

Berry has been playing in junior golf tournaments since the sixth grade. She said she enjoys working hard.

“I am going to be practicing my putting because that was a little iffy last season,” she said. “I have been working on my swing all summer and my putting so I can get to state next season. Once I get into golfing I am fine, but if I stop a little bit, I need a little kick to get back into it.”

Trojans Coach Bob Hopkins was at the junior golf tournament and said it was the first time he had seen his male golfers since the season ended. He was also excited about taking over the girls team this year.

“Basically, I just want them to get out and play,” Hopkins said. “Not only here, but hopefully I can get them out three to four times a week. I am going to try to get more girls. We have 13-14 girls signed up that are interested in golf. Hopefully I can get them out two times a week at Mountain Falls hitting and chipping, so we can get them playing. If they don’t play, we are not going to get any better. We should have everyone back this year. I know we can do better. We are trying to get a few more girls interested and hopefully that will push everyone to be better.”

Austen Ancell was one of the top golfers for the Trojans this year and he has also been playing junior golf since he was young. He is is also playing golf with two other organizations besides junior golf. He is doing US Kids tournaments, and Antiqua Golf which are both groups out of Las Vegas.

“My goal for the summer is 70s consistently. The past few rounds I have been in the very low eighties and that is because of one or two bad holes,” Ancell said.

Susan Moore, a very excited grandma, had her young 11-year-old granddaughter out for some summer fun.

“I play golf here at Lake View and I have a grandson who was in this program and he plays golf. My granddaughter, Alice, was interested. She said she wanted to play, so I am out here for her. She had to show an interest and she did,” Moore said.

Cox wants the kids to have fun. On the serious side, he also wants the high school program to become better. For the golf program to change, he believes the culture has to change out in the valley.

“There are just a few kids here and it’s almost like a cultural thing. In a big city, when the kids get out of school they go to the golf course. Here the kids might go to the golf course once or twice a week. They just don’t put in the practice time. There are a few kids that do like Austen and Derek Moore. The younger kids need more repetition. They need to play golf five days a week. Lake View is available if they are junior golfers, they just need to come out and play,” he said.

Par Four Golf also has started a program, which is more golf for kids that will feature four golf tournaments for the summer and fall. The schedule is as follows: Silverstone July 12, Mountain Falls Aug. 10, Wild Horse Sept. 7 and Badlands Nov. 16. All tournaments are $50 or $40 if you are a Par Four Junior golf member.