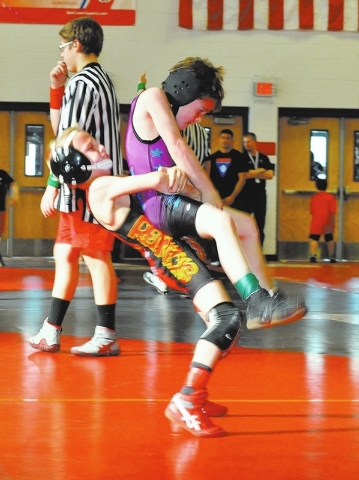 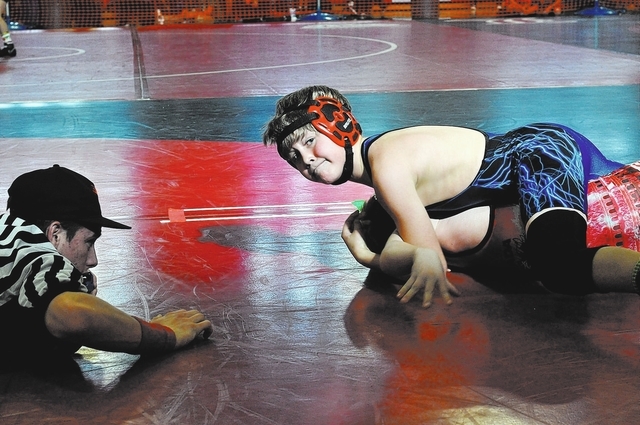 Pahrump Valley Junior Trojans wrestling Coach Ray Cortez is excited with his team for taking second place in Henderson at the Patriot tourney sponsored by the junior wrestling group near Liberty High School in Henderson.

Not only did the Junior Trojans take second, but they also beat Liberty, the host.

At the tourney there were 448 wrestlers. Cortez took about 30 wrestlers with him and said his team missed first by just 10 points.

The coach said he had several wrestlers wrestle out of division. His son Gunner Cortez did this and won first place. Darin LeGrand did this too. When you wrestle out of division, it means you go up in age but not weight class. Gunner was wrestling kids several years older as well as LeGrand. The coach also complimented Donald Davis for his first place and the hard work of the Briscoe brothers Caden and Cameron.

“The team that beat us was Green Valley Platinum, a very good team. They have won every tournament this year with 17 wrestlers and they beat everybody by 100 team points each week. The team points earned are not necessarily from points won by each wrestler. If you take a large bracket you get 24 points and a smaller bracket could be 16 points. The more competitive, the more kids in the bracket, and the more first places all determine the number of points. They also score the top 20 scorers on your team each week,” Ray said.

Cortez took the time to acknowledge the hard work and dedication of the parents, who just don’t drop their kids off at wrestling every week.

“I want to thank the parents for their dedication,” Ray said. “Our group, it’s almost like a family wherever we go. Our little wrestling family keeps an eye out for each other’s kids.”

He said the team had come a long way. Many of his new kids wrestled rookie division and in that division there are no team points, to get the points you have to wrestle varsity. Things have changed drastically since the first few months.

“That is why we are doing better now, because those kids are getting more confident and not wrestling rookie and so there are more top earners on the team. We started the year in 4th and 5th place and then we got a third, took our home tournament with a first, and then we got a second,” Ray explained.

The Junior Trojans have six more tournaments to go in the season and find that they do trail the Green Valley group who has first place locked up by some points, but second to sixth place is wide open. Last year the Trojans finished 5th and hope to do a lot better this year.

This week the young wrestlers travel to fight the Las Vegas Gladiators from Arbor View and the following weekend the team will be going to Ridgefield, Utah.