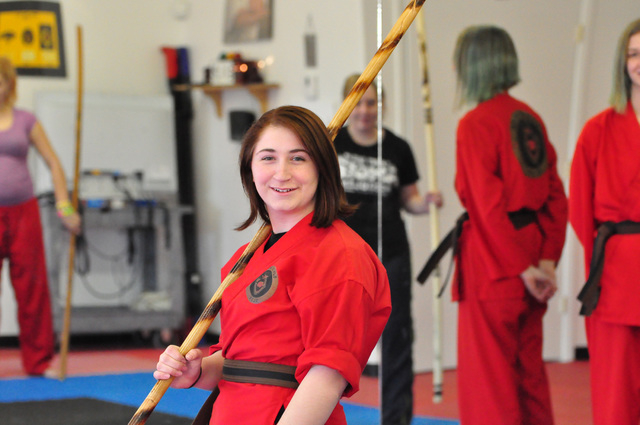 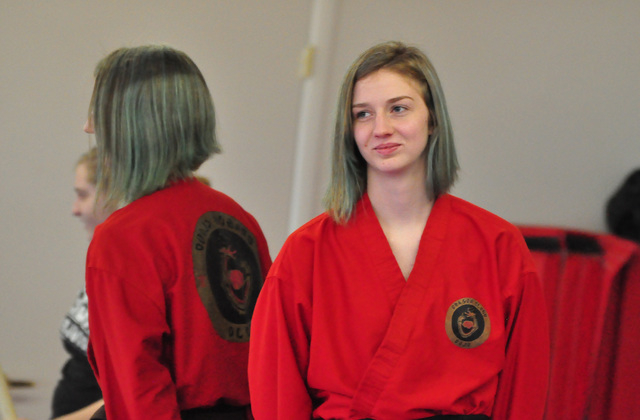 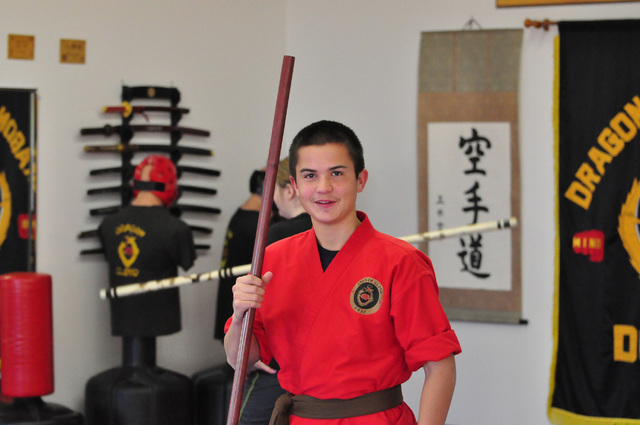 Karate students are focused and disciplined and to get there it takes the willingness to take some hard knocks and put in long hours of study. The fruits of their labor lead to better grades and better all-around citizens.

Holly Hernandez at the Dragon Cloud Dojo in Pahrump is in charge of the karate school’s (dojo) elite demonstration team. She let the Pahrump Valley Times talk to three of the team’s highest students. The students are Dylan Grossell, Deborah Talley and Reagan Adams.

“The demo team at our dojo is the face of the school,” Hernandez said. “They show people what positive role models young people can be.”

The students on the team are the community ambassadors. To get on the demo team the students have to audition and must be a yellow belt or better. This means they have been taking karate for at least one year and a half. There is a full week of auditions. They also have to sign a contract which means they must maintain their karate classes. The team also has a special uniform. Finally, they must all maintain a 2.0 GPA or better to be in the dojo.

“These students are all hard workers and team players,” Hernandez said. “They have all held the status of captain. I have had to rely on them to work with people in individual groups. They have to be able to lead. These kids are a terrific team to work with.”

Hernandez said that karate helps kids with school because it teaches students to focus and of course they can apply that to their school work.

“The students learn coping skills,” she said. “When things become too stressful in school with all the multitasking and testing, the students are capable of meditating and focusing on the task at hand.”

According to Hernandez, many of the students on her team maintain a 3.0 or better.

Dylan Grossell has been in karate for four years and is in the eighth grade at Rosemary Clarke Middle School. He always wanted to learn how to defend himself and he used to watch a lot of Bruce Lee movies, which inspired him to look into karate.

“I look up to Bruce and Andrew Gonzalez. Andrew is a black belt here at the dojo and he helped me to learn how to use weapons. My favorite aspect of karate is going to the tournaments and sparring. I like it because it lets me know if I am using good technique.”

Grossell is currently a brown belt.

“In order for me to become a black belt I have to turn 16. Our Sensei has this rule because he wants his students to mentally be able to compete with everybody,” he said.

For his black belt test, he will have to prepare mentally and physically to handle the test. One example of the rigors of this test is he will have to spend two hours in a horse stance.

“Being able to do that tests your mind, body and soul,” Grossell said. “Karate has taught me to control my anger if I ever got mad and to never hit anyone with bad intentions.”

For Grossell, the martial arts have made school easier. He now has a way of solving problems on his own.

“Karate has helped me at school because it has helped me to concentrate,” he said. “If I ever get frustrated I try to connect it to karate and this makes tasks easier.”

Grossell said karate has helped raise his grades and he says he pays attention in class more.

“In karate you have to pay attention in close detail to instructions. I just took that to my school work and now I listen better to the teachers,” he said.

Grossell gets the discipline to learn from the karate practice of Mokso, which is a command and a position. The command is given at the meditation before a training session and it means to clear your mind in preparation to receive instruction.

Deborah Talley started studying karate when she was seven and this is now her eighth year. She is an advanced-brown belt and black belt candidate at 14.

“This means I know everything that I have to test for the belt and now I just need to practice. I need to prove that I deserve it.”

She said she started learning karate because her family was taking it too.

To Talley her karate has become a passion.

“I love doing the forms and learning how to defend myself against an attacker,” Talley said. “The sport really comes easy to me. I also enjoy the movement and watching the black belts. It inspires me to get better.”

Karate has given Talley an outlet. Learning this martial art calms her nerves.

“It totally provides me with stress relief,” she said. “If I am having a bad day and I am walking to the dojo it automatically goes away because I am so relaxed there. I am also excited to learn and it makes me forget about everything else and I focus immediately on karate.”

She said the sport has given her more discipline because before karate she feels she was more of a slacker.

“I didn’t want to put effort into my schooling,” Talley said. “I was a kid that said, ‘I am too cool for school.’ And when I started taking karate it gave me a better outlook on life.”

Talley is home schooled. She said karate changed her way of thinking.

“I knew if I didn’t try hard in school I wasn’t going to go anywhere in life,” she said.

“I have always been stressed in tournaments and performing,” she said. “I get rid of this stress by sitting in Mokso. I just breathe in and out and I realize this is not the worst thing I can be doing. I think to myself if I don’t pass this test I will come back and do it 10 times better.”

Talley is not intimidated by a person’s size or strength.

“Just because someone is stronger than me doesn’t mean I don’t know how to knock them to the floor. Every person has his own strengths.”

Reagan Adams is 13 and has been doing karate for five years and is an advanced-brown belt. She got into karate because it looked like a fun sport. She wants to make black belt by the time she is 16.

“My step-dad also told me about the dangers in the world so I thought it would be a good idea to learn how to defend myself,” she said. “I kept going because I liked the strenuous activity and it continued to be fun.”

Reagan can take a hit.

“I don’t mind getting hit and I definitely don’t mind the bruising,” Adams said. “The worse I have ever had was when someone hit me in the hip, which is an illegal hit because you can break someone’s hip. I got kicked there by accident.”

She said she really never cried a lot.

“The only time I really cried was when I went up against a green belt and got the wind knocked out of me,” she said.

Adams believes karate is good for you because it teaches you discipline in life.

“It has made me more disciplined in everyday life,” Adams said. “It teaches you what is right and wrong. It also teaches you how to use your karate. Karate has made me calmer and it has made me get a better grade in language arts especially when teachers frustrate me.”

Adams has a plan for her future.

“I plan on getting my black belt and then I will stop to concentrate on school. I want a specific degree and I know it will take a lot of work,” she said.