Pahrump Valley Times file Kasey Dilger of Pahrump has won three horseshoes tournaments during the past two months, posting undefeated records in two of them. 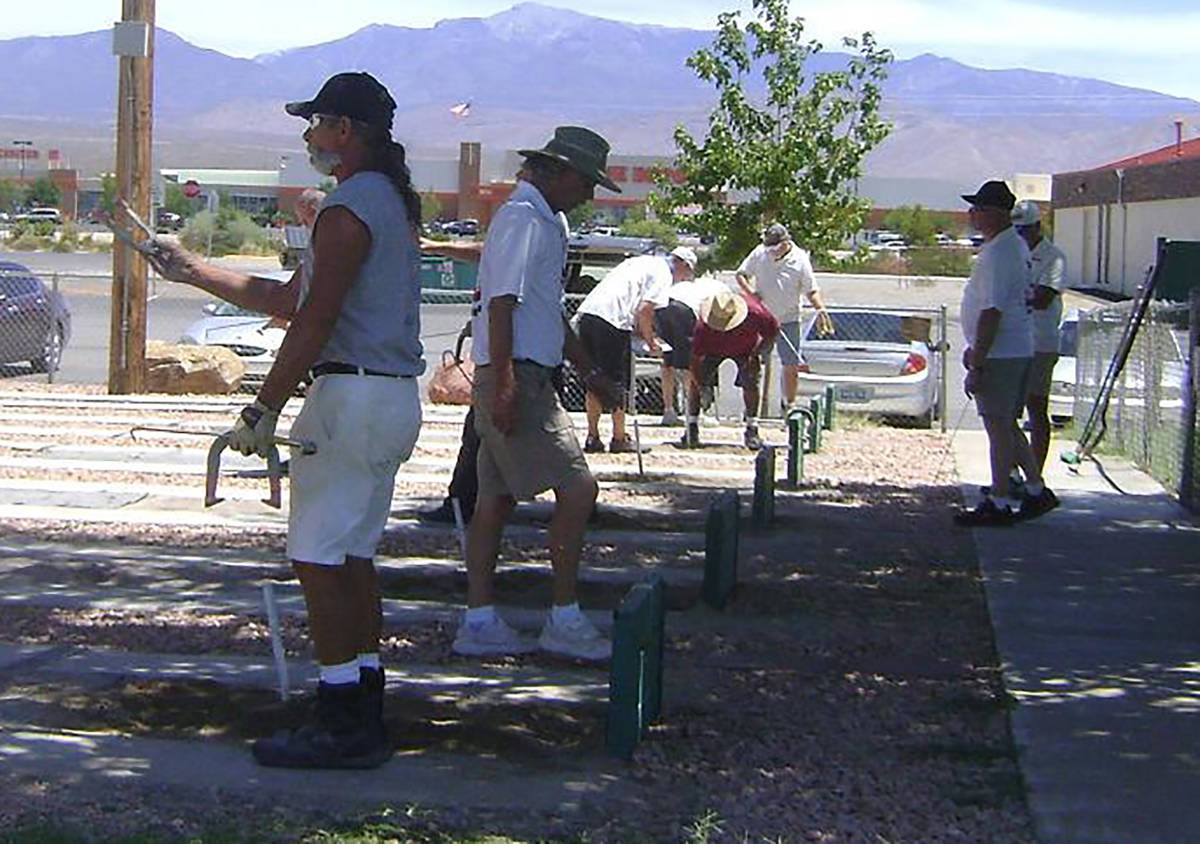 Pahrump Valley Times file The horseshoes pits at Petrack Park will be busy Sunday when the Southern Nevada Horseshoe Pitching Association presents the Firecracker Open at 10 a.m. The entry fee is $10, and a blind draw will determine teams for the doubles tournament.

Just as it has in other sports, the COVID-19 pandemic hit the horseshoes circuit. But at a time when even outdoor gatherings are limited, the number of participants in most horseshoes tournaments comes under — sometimes well under — limits prescribed by health officials.

The pitchers stayed under the radar for a while, but when Lathan Dilger of Pahrump, the pitchers’ association president, delivered the results of four sanctioned tournaments held during May and June, the biggest winner turned out to be one of the newest pitchers: his own son, recent Pahrump Valley High School graduate Kasey.

The younger Dilger was crowned tournament champion in the first three events, including undefeated records during the middle two.

“I started the Backyard Summer Series, where we hold tournaments in someone’s backyard,” he explained. “We have had two of them, DJ’S Ranch Open, and Jim’s Backyard Bash.”

Lathan Dilger and Neil Norvell won the former, which had a total pot of $160; while Kasey Dilger and George Mallory won the latter, when there were eight teams and a pot of $320.

“The next one is Gary’s Mountain Open in Kyle Canyon, Mount Charleston,” Lathan Dilger said of the July 11 event. “It should be nice and cool up there. “All backyard events have food, drinks, trophies and $20-per-person entry.

“They have been very fun, and I have a few more lined up. I built pits over here at Pahrump Valley Storage, so I will be holding one here when it cools off.”

In the most recent sanctioned event, Louie Escalante went undefeated in Class A to win the tournament championship on June 20, posting 202 points and 97 ringers in the process. The only blemish was a 41-41 tie with second-place Lathan Dilger, but Escalante swept his games against Joseph Kalache, Dennis Andersen, Dan Dunn and Kasey Dilger.

Escalante’s ringer total of 97, while slightly below his entry percentage — a whopping 50.74 — was almost 30 better than anyone else in the field. Andersen connected 68 times to share second place with Class B champion Dave Barefield in the ringer department, while Kalache’s 220 points were best on the day.

Barefield went 4-1 to win Class B, beating Mark Kaczmarek in a playoff. Barefield was the only pitcher in Class B to exceed his entry ringer percentage, and his total of 68 topped his opponents by 19.

In Class C, John Pickard matched Barefield’s feat of being the only person in the division to exceed his entry ringer percentage on his way to an undefeated day. While third-place George Mallory recorded 28 ringers to Pickard’s 25, Pickard racked up 157 points, 30 more than anyone else in the division.

Kasey Dilger was unstoppable on June 6, posting a perfect 4-0 record in Class A, hitting 80 ringers — 15 more than anyone else — totaling a tournament-high 171 points and exceeding his entry ringer percentage with a tournament-best 40.0%.

Dilger’s closest call came against Andersen, a relative squeaker at 39-31. His best game was a 49-point effort against Kalache, who wound up third. Lathan Dilger and Dan Dunn tied for fourth — tying each other 29-29 during round-robin play.

Barefield went undefeated in Class B, including a 53-point outburst against Randy Salzwimmer, who finished third. In between the two was Mike Nicosia, who lost by 15 to Barefield but defeated Salzwimmer by 45.

Kasey Dilger wasn’t quite as dominant back on May 16, but he was good enough to post another 4-0 record and win another tournament championship. His 68 ringers again exceeded his entry percentage, although his total of 175 points was actually five fewer than his second-place father. Lathan Dilger defeated Dunn, Andersen and Kalache in his other three games, but in the head-to-head battle the younger Dilger rolled to a 47-27 win, his largest margin of victory in the tournament.

Kaczmarek had a similar situation in Class B; his 135 points were not tops in the division, but in the end he was the one with the 4-0 record and the division title. Kaczmarek locked up the title with his 39-25 victory over Nicosia, who finished second. Kaczmarek and Nicosia each finished with 51 ringers.

Back on May 9, Kasey Dilger needed some extra work to capture the tournament title, winning a playoff and finishing 5-2. Dilger had to beat Dunn and Don

Brown twice each to earn the win. The pitchers who had to work overtime — Dunn, Brown and Kalache — each totaled more points than Dilger during the round robin, but Dilger won three 3-point games, and that made the difference.

By contrast, on this day the older Dilger had his way with the younger one, as Lathan Dilger rolled against Kasey to the tune of 54-15. That was an outlier, as Kasey won five of his other six games while Lathan won one of his other four.

Nicosia also worked overtime to win in Class B, facing James Hatch and Salzwimmer twice during his 6-1 tournament. Winning three of those four games pushed him over the top; Hatch defeated Nicosia 31-28, and Nicosia defeated Hatch 21-19.

Other tournaments have been lost to the pandemic, including events connected with Jim Butler Days in Tonopah, Goldfield Days and the Wild West Extravaganza in Pahrump.