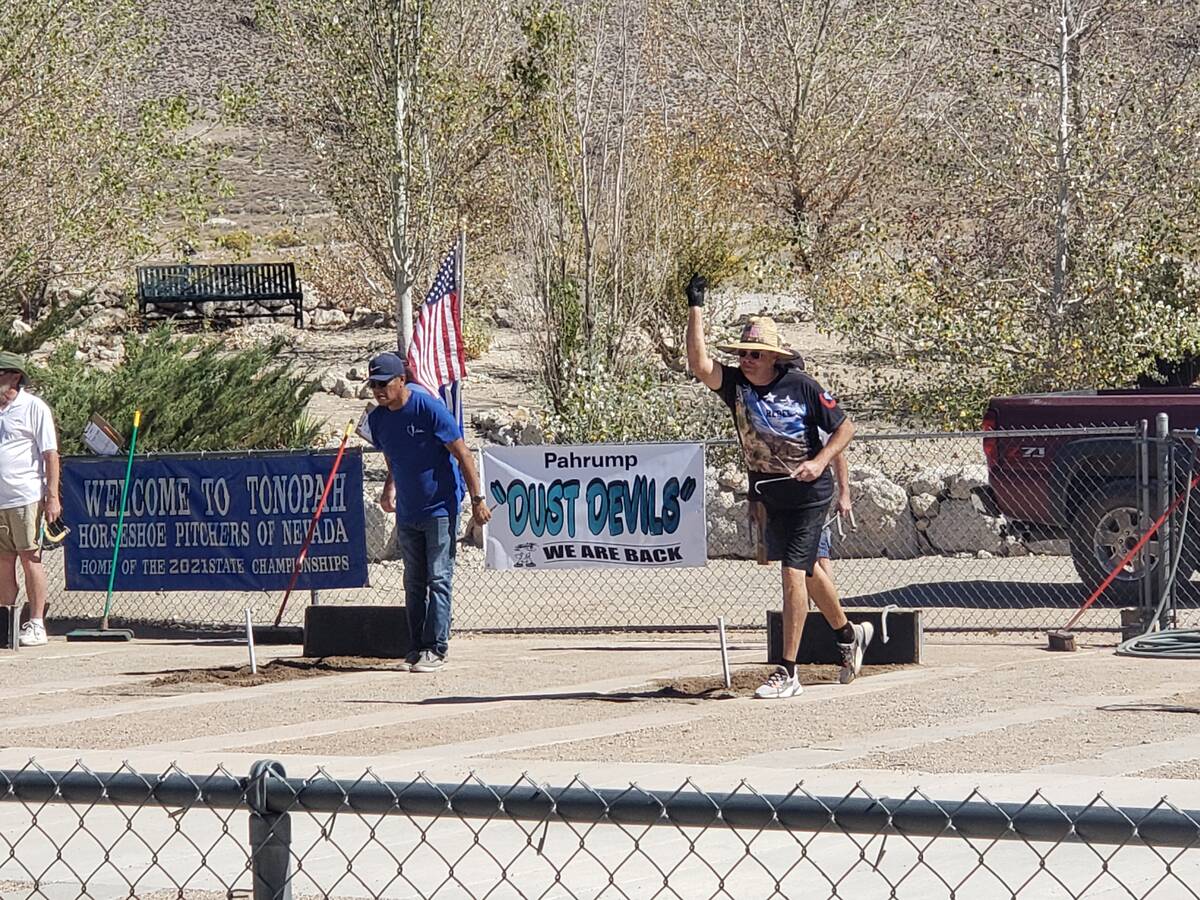 Foster Kenton Jr. took home first place in the top bracket of the Nevada State Horseshoe Pitching Association tournament that was held in Tonopah on Saturday.

The tournament had 29 pitchers who were involved and they were split up into five different brackets. The Men’s A bracket, which Kenton Jr. won, was the top bracket of the tournament. There were also Men’s B, Men’s C, Elders A and Elders B brackets.

Two women participated in the tournament, however, since both were the only pitchers for their respective classes, each one was declared the automatic winner of the class. The Women’s A winner was Carol Lanfair from Gardnerville, and the Women’s B winner was Lela Hardy.

Kenton Jr., a resident of Hawthorne, competed in the Men’s A bracket of the tournament against six other pitchers from throughout Nevada. He finished the tournament with a perfect record of 6-0. Along the way, he was able to hit 141 ringers from his 240 throws and scored a total of 302 points.

“I shot pretty comfortably, actually,” Kenton Jr. said. “Didn’t have a very good, strong practice session all week, but I came in here with a positive attitude, so I just went with that. It panned out pretty good for me today. Had one bad game to start the round, but I overcame that and finished strong.”

The Men’s C bracket winner was David Johnson, followed by David Skoglie and Kevin Chael. Johnson and Skoglie finished the tournament tied with a 5-1 record, but Johnson won the tiebreaker with his 28 ringers, compared to Skoglie’s 25. Chael, who finished in third place, ended the day with a record of 4-2 and had 91 total points with 11 ringers.

The Elders group had nine players who were split into two groups. Harold Holbrook took first place in the Elders A bracket. He joined Kenton Jr. and Elders B bracket winner Larry Auchoberry as the only pitchers in the tournament who finished with perfect records. Holbrook finished with a record of 6-0. He had 167 total points to go along with 90 ringers.

Louie Escalante and Scott Hardy rounded out the top three for the Elders A bracket. Escalante finished with a record of 4-2 and had 131 total points to go along with his 81 ringers. Hardy, who finished in third place, had a record of 2-4 with 90 total points and 71 ringers.

“I’d like to thank everyone for turning out today,” NSHPA president Lathan Dilger, said. “I was hoping for more, I’d like to see all 90 come in, if they could. I would love to have more people. Everybody’s having a good time, that’s the important thing for the ones that made it.”