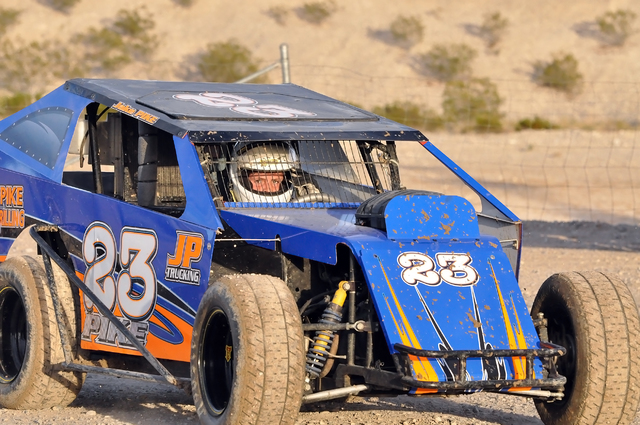 Jake Pike in his new Western Modlite at the Pahurump Valley Speedway. It was his first race on the quarter-mile track and he took fourth place for his efforts. Horace Langford Jr. / Pahrump Valley Times 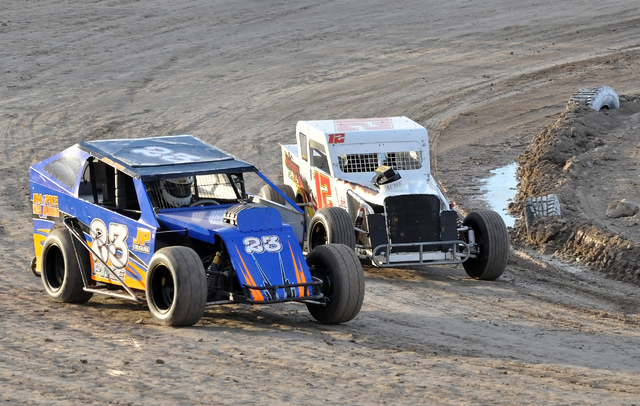 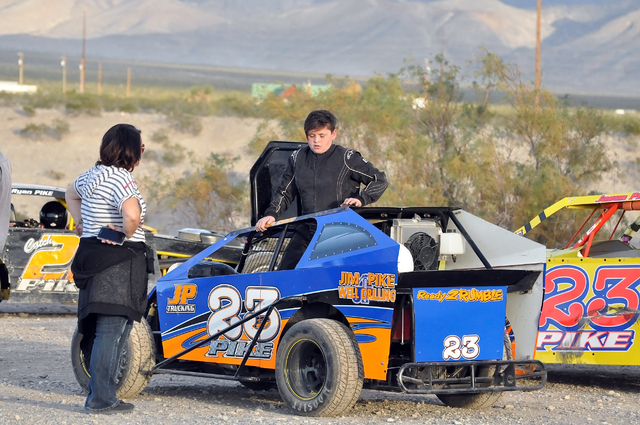 Jake Pike with his no. 23 getting ready to race for the first time in the Dwarf Class at Pahrump Valley Speedway. Pike received a special invitation to race in the association. Horace Langford Jr. / Pahrump Valley Times

Jake Pike moved up in class at the Pahrump Valley Speedway and went from the Mini Dwarf racer to a new Western Mod Lite racer on Saturday.

It was his first race on the big track and an exciting day for the young racer, who is 12.

Jake Pike is the son of Jason Pike, a longtime champion racer at the Pahrump Valley Speedway. Jake Pike has been longing for this day for some time now. He had done the Mini Dwarf class, which is much slower, at 27 miles per hour. The track is also smaller. In fact, the track is in the infield of the bigger track at the speedway.

The Mini Dwarf Division is for kids from five-to-13 years of age and is meant as an introductory division to get kids interested in racing.

“The bigger track was a lot different than the small track,” he said. “You get more speed on the big track and it was my first time racing on Pahrump’s track.”

He said he reached speeds of 66 mph in his Mod Lite.

Of course Jake didn’t just start racing the quarter-mile track without any practice. He said he got some time on a California track before going big at the local speedway.

“I got some of my practice at two tracks in California,” Jake Pike said. “I raced a Friday and Saturday race a couple months ago and I also practiced a few times on a Sunday at the Pahrump track by myself.”

Jason Pike still races but spends a lot of his time with his children and watching them race and giving them advice. He has one other child that races, his daughter, Jaiden. She was the Senior Mini Dwarf Champion this season.

“My dad did give me advice,” Jake said. “He told me to just take my time and get a feel for the track but to try and stay up with the cars.”

That was a tall order, as Jake was racing with some veteran drivers who had a lot more experience than he did.

Most parents would be on pins and needles watching their young son who is still in middle school take on a bunch of older drivers. But Tanya Pike is used to the racing scene and already went through this with her oldest kid, her husband Jake.

“It makes me so happy to see him do so well on the big tracks,” Tanya Pike said. “He can definitely hold his own. It makes me nervous but I know he is a cautious racer and doesn’t just go out and tear his stuff up. We have gotten him a HANS (safety harness) device also to make sure he is safe when he races. I’m very proud of him. He is going to be a great racer in the future.”

His father agreed with his wife and totally enjoyed watching his son race.

“I told him what to look for and that he should be watching the cars ahead of him and I remind him that he has open wheels and if he touches other wheels that can flip his car. I just want him to be aware.” Jason Pike said. “Time is flying and I realized he is growing up now.”

For Jake Pike the last race he did was not about winning, it was about gaining valuable experience for next season.

“I didn’t win the race but I got fourth,” he said.

A fourth-place finish among racers with far more experience than him was a great race.

For this young racer the future is bright, and someday he wants to race the same class as his father.

“I want to race a B-Modified in the future.”

“That is what my goal is,” Jake said.

Dad is just taking one moment at a time and really not thinking too far into the future.

“I am not really thinking NASCAR,” he said. “I want my son to have fun. I really am not going to pressure him and push him into racing. When I saw him on the track I really was happy for him and was really impressed. He held his own.”

For those race fans reading this, most probably caught the fact that Jake is 12 and that the rule at the Pahrump Valley Speedway is 14 before they can drive bigger cars.

“Jake has been racing in California where the Dwarf Car Association has let 12 year olds on the track,” Jason said. “They like the way my son handles the car and invited him to race in the association. He will be racing next year at Pahrump, Mojave Valley Raceway and California and Arizona tracks.”