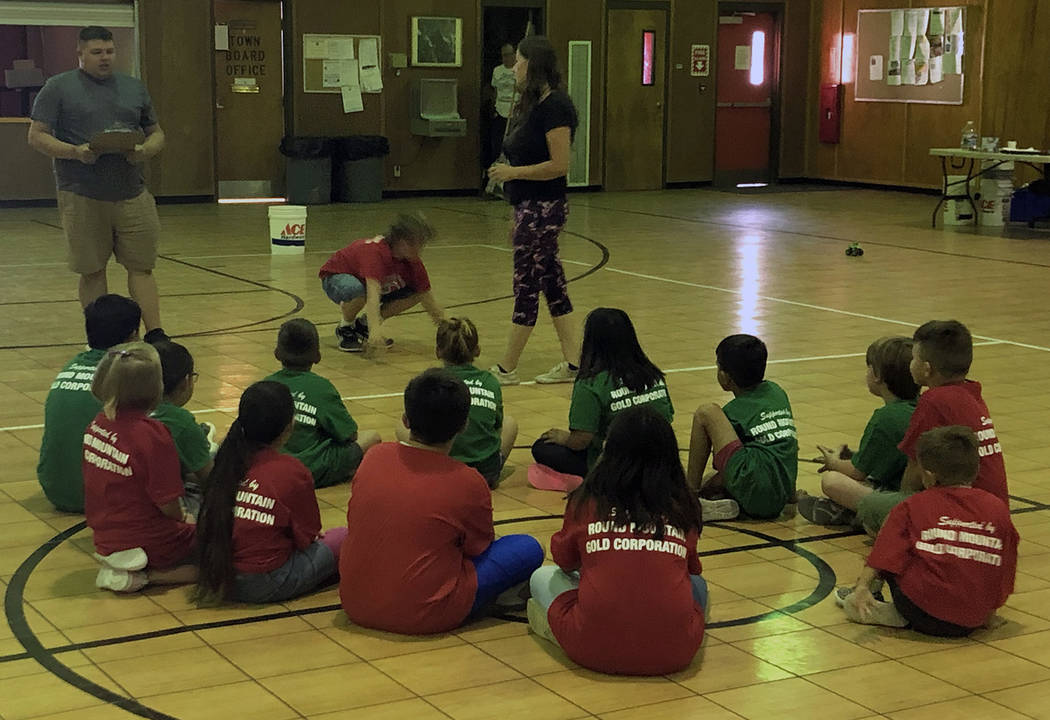 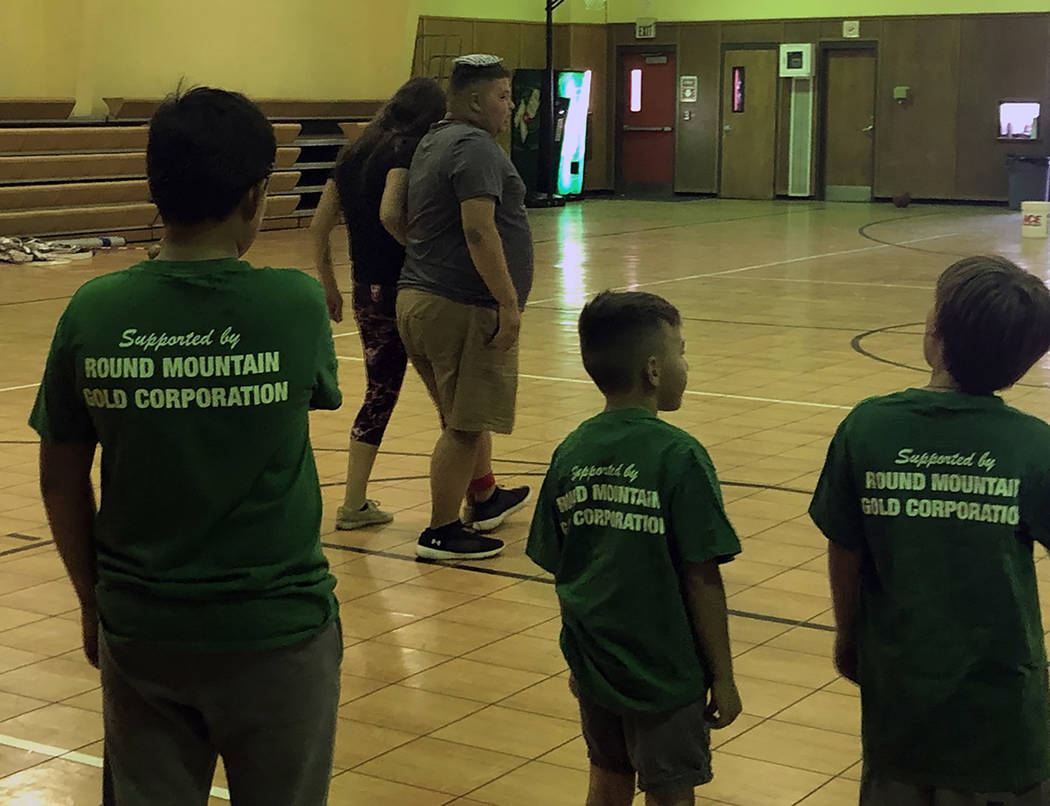 Tom Rysinski/Pahrump Valley Times Melanie Lepore and Brett Krugman demonstrate how to walk effectively in a three-legged race at the start of the Nye County Sheriff's Games on Monday in Amargosa Valley. 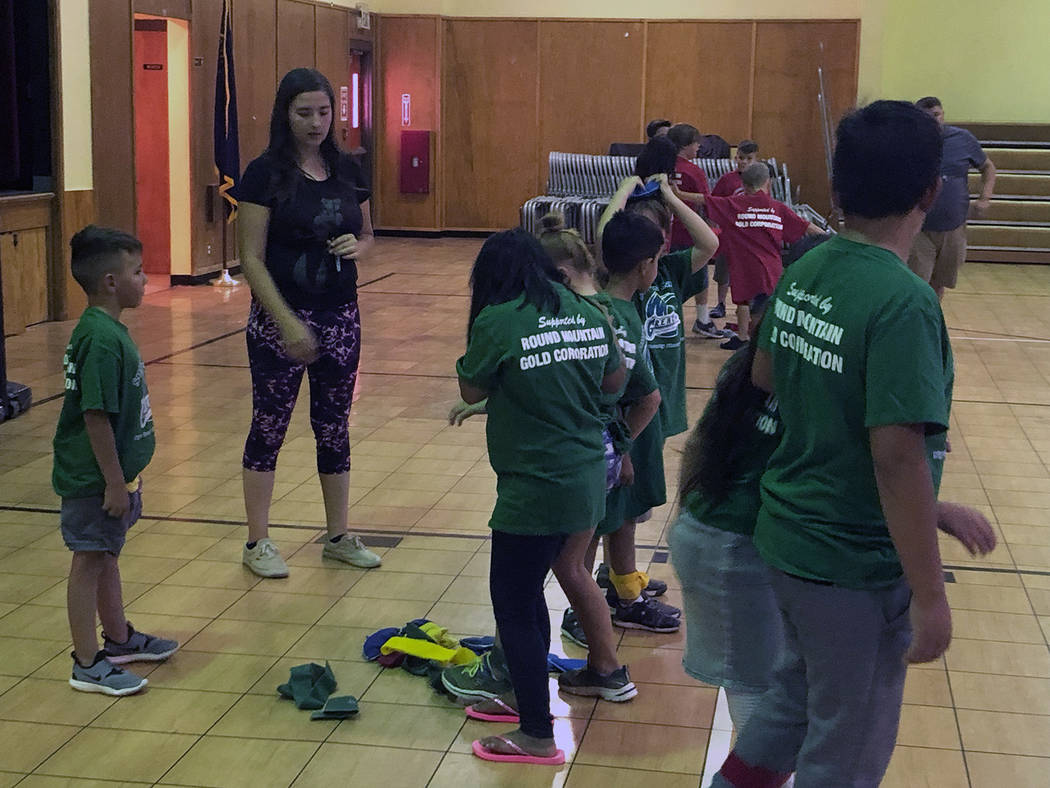 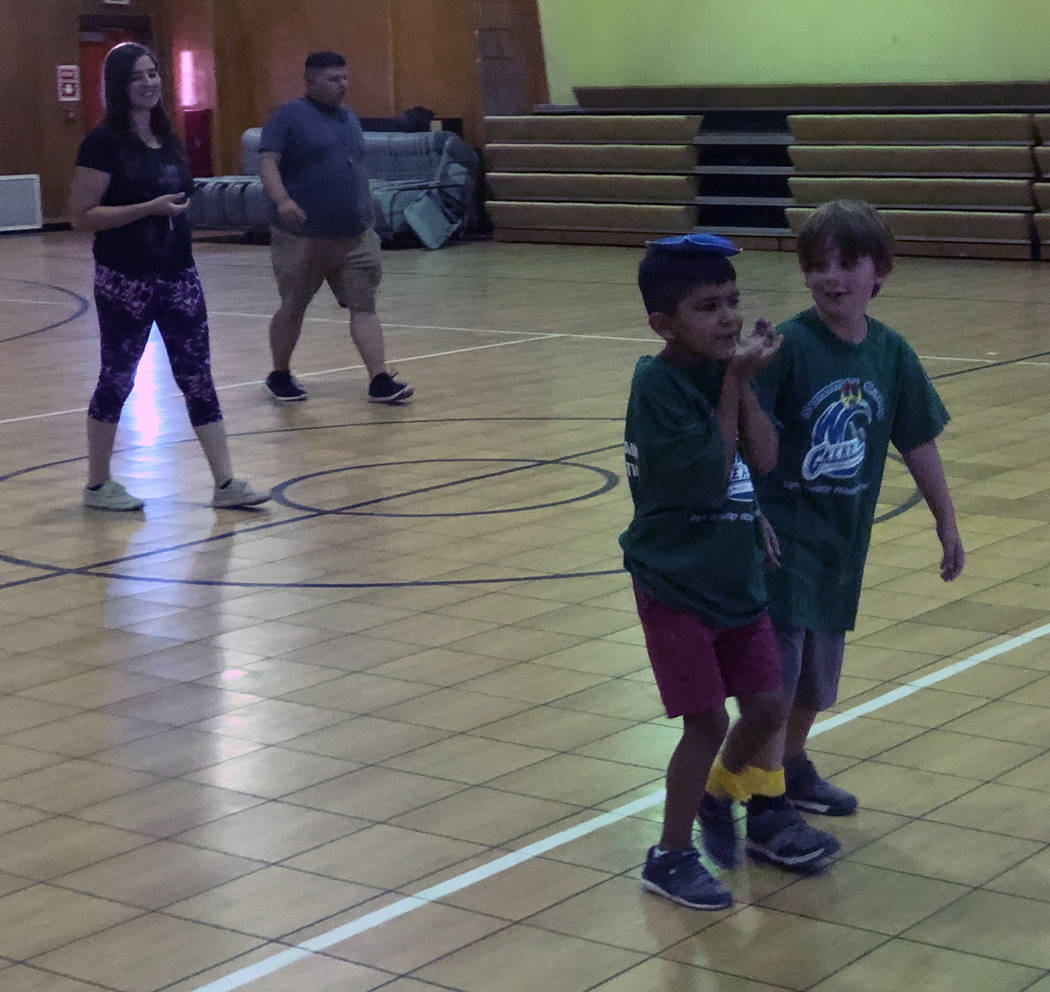 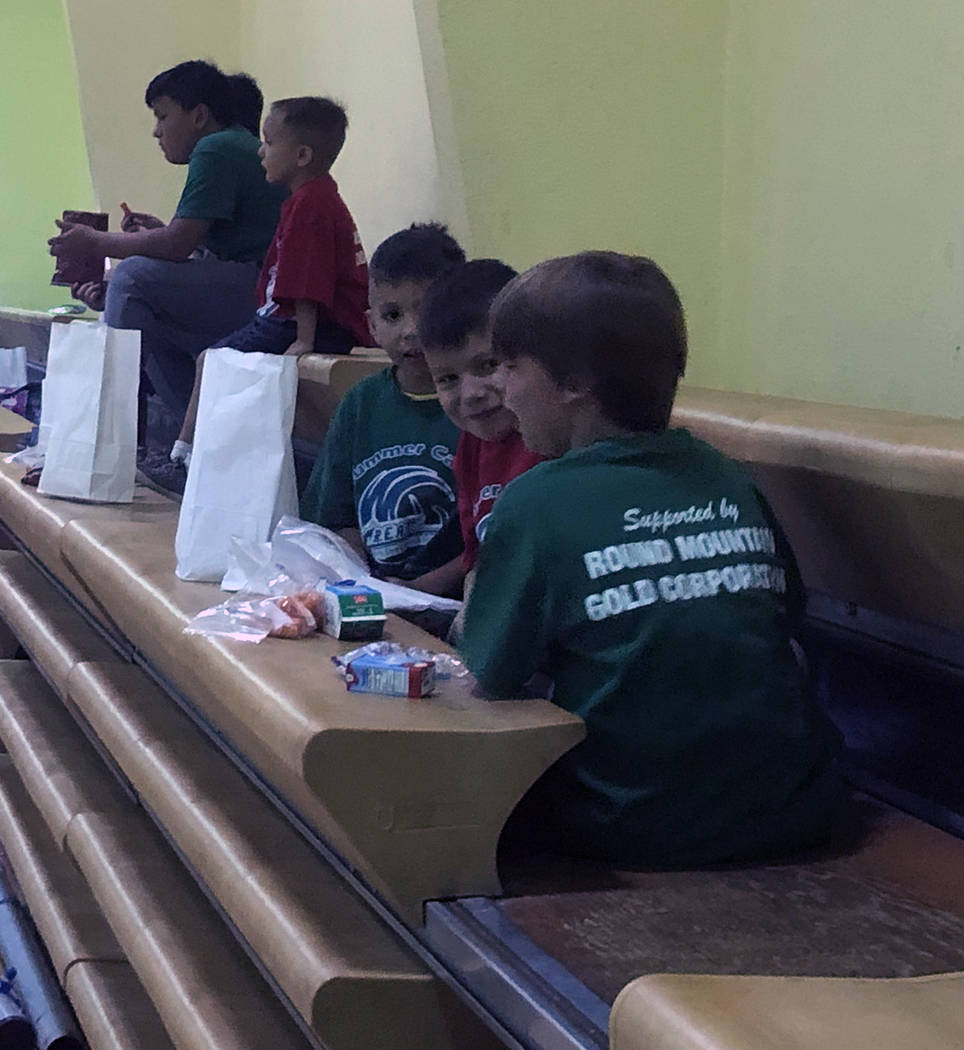 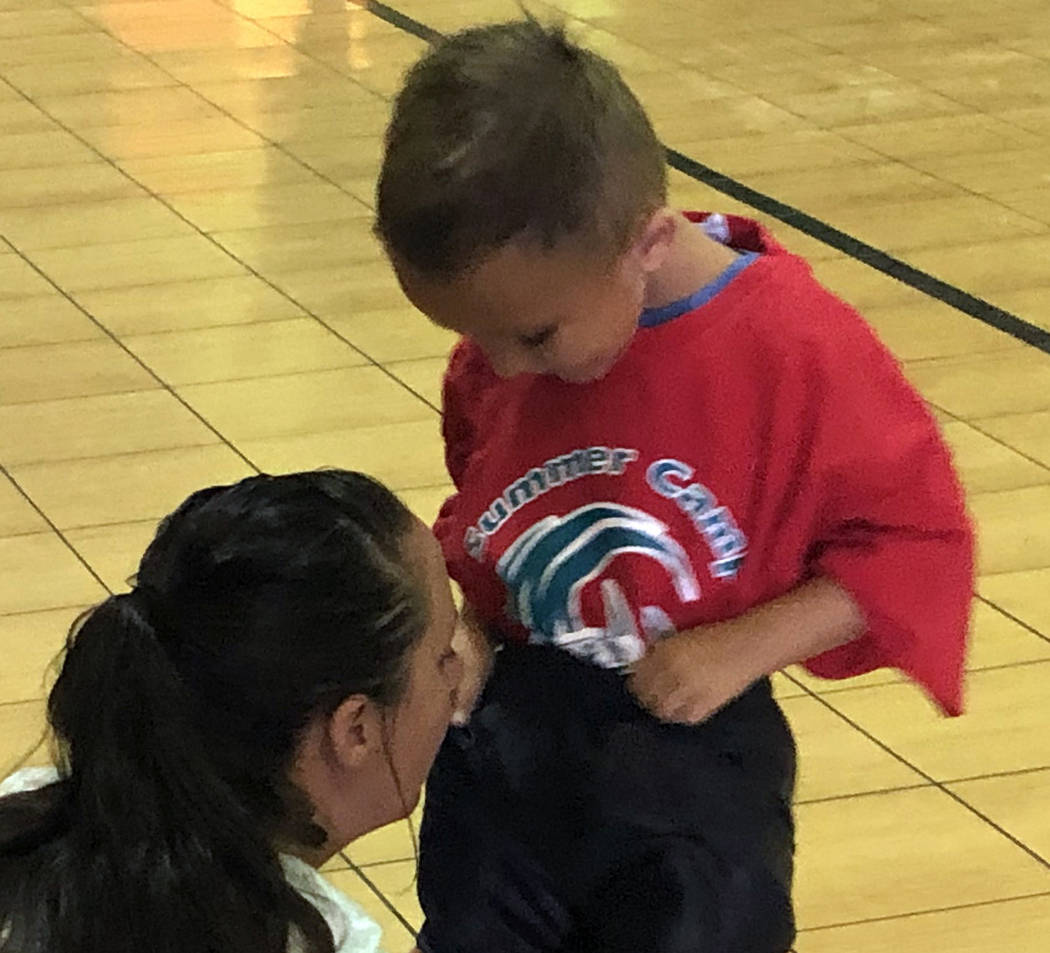 Tom Rysinski/Pahrump Valley Times A young participant gets a little help making sure his oversized T-shirt will work before hitting the floor during the Nye County Sheriff's Games on Monday in Amargosa Valley. 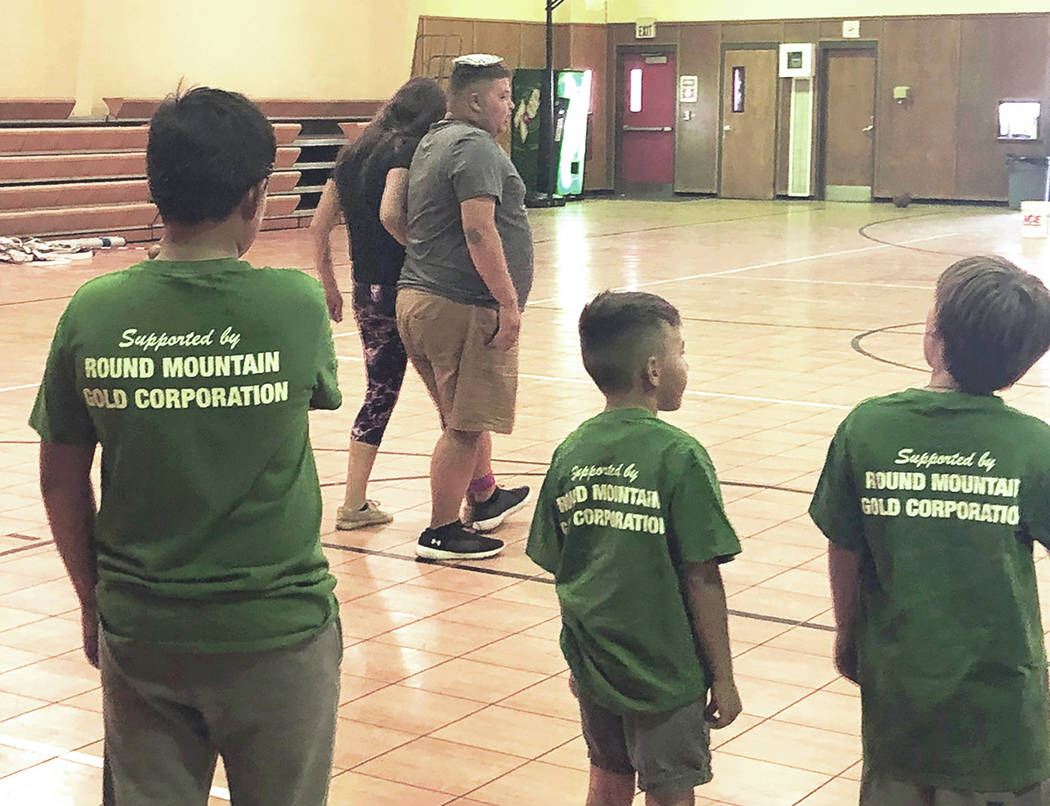 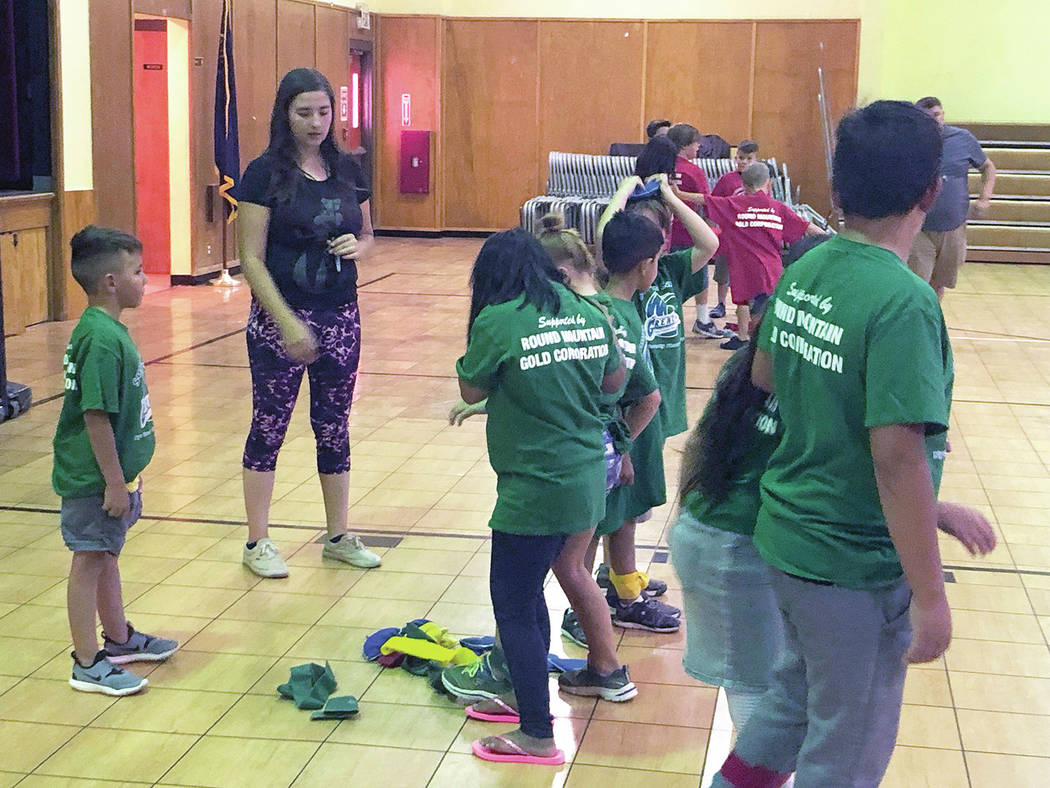 Pairs of kids are lined up, ready for the race. One’s left leg to the other’s right leg with Velcro straps, as in the classic three-legged race.

Except one of the kids in each pair has a bean bag on his or her head.

This is considered fun. Really.

It might sound like some kind of horrible torture devised by the CIA, but the kids loved it. A bean bag drops, both kids laugh and head back to start. Adults could learn something from this.

But it’s not an educational exercise, it’s the annual Nye County Sheriff’s Office Summer Games, which came to Amargosa Valley this week. Fifteen kids showed up Monday at the Community Center, but the Sheriff’s Games draw more participants in the larger towns.

“We average 40 to 50 kids,” Deputy John Tolle said. “A lot of them participate all week. We do two days indoors and two days outdoors, depending on the weather.”

Some towns have more facilities than others, but Tolle said the rule is that any new game introduced in the program must be able to be done at each of the seven sites. Stops in Tonopah, Gabbs, Round Mountain, Duckwater and Pahrump preceded Amargosa Valley.

Brett Krugman and Melanie Lepore of the Nye County Sheriff’s Office Explorers, young people interested in a career in law enforcement, ran the games. Krugman set the tone for the day early.

Krugman, a captain in the Explorers, and Lepore, a sergeant, chose teams, doing their best to balance the rosters.

“Every time we pick off the list it becomes unbalanced,” Krugman told the parents. “Every time we go off the list, no matter what we do, it always ends up big kids versus little kids. So we try to balance that.”

He also warned the kids about keeping within the spirit of the games, participating fully without roughhousing or being disruptive. “We WILL send you home,” he warned. “We don’t like to do that, but …”

Nuvia Contreras brought her three kids — Natalie, 11, Heidi, 9, and Leonardo, 6 (“I’m six and a half,” he stressed) — because they had enjoyed the Sheriff’s Games in the past.

“They look forward to it every year,” she said. “In the park, they like the water games. They like that the best. They’re very competitive.”

Leonardo enjoyed the bean bag relay, despite the challenge of it.

“I really like that,” she said, adding she will turn 9 in August. “The two feet that you have wrapped around are in and the two that are loose are out.” With teammates chanting “In! Out! In! Out!” to encourage them, some of the racers were more successful than others at developing a rhythm. The punishment for falling was having to get up with your legs strapped together, and carrying a smaller partner was not allowed.

But while winners were declared in each game, it was more of a social event — and a way for parents to give their kids something to do with somebody else keeping an eye on them.

“I was really excited, and I wanted to see some friends,” said Kierra Jerkins, attending for the first time. “I have my friend Noah here, and Leonardo, his sister … a lot of friends are here.”

Tolle, in his second year of working with the Sheriff’s Games, said the office has been doing them for at least a decade. And while several of the parents stayed to watch their kids, Krugman made sure parents who had other things to do while their kids were occupied knew when to come pick them up.

“It’s OK, we won’t leave until you come pick up your kids,” he said to laughter.

Next week will be the final stop for the Sheriff’s Games this summer, running Monday through Thursday in Beatty. The games are free, and lunch is provided.

For information on how to take part, go to www.nyecountysheriffsoffice.com/summer-games.html on the web. The website includes a link for parents to register their child and additional program details.