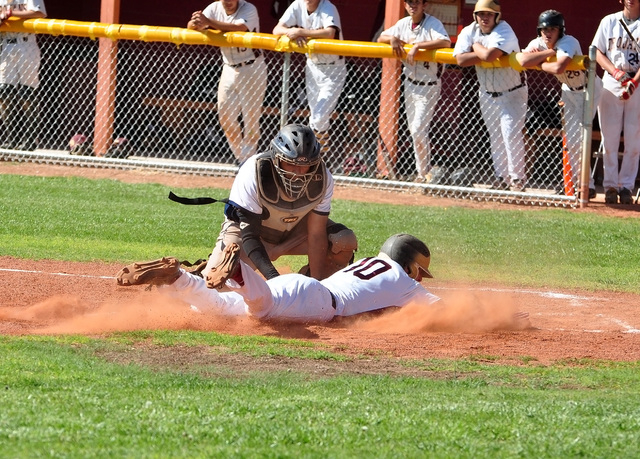 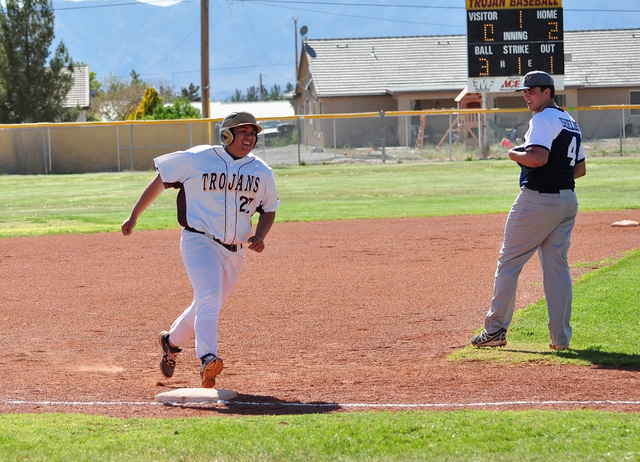 Trojans senior pitcher Kyle Kral was too much for Cheyenne as he pitched an 11-0 shutout for his third win of the season on Tuesday before a home crowd.

He was named player of the game for his efforts. In the game he struck out six and walked one. Kral is 3-2 for the year.

Pahrump Valley came off their spring ready to play and didn’t waste any time scoring. Prior to the game, Trojans coach Brian Hayes told his team that they were the better team.

“We simply challenged them to play like the better team,” he said. “In the game of baseball, just showing up doesn’t win games, what you do between the lines does.”

The Trojan hitters took those words to heart and blasted the Desert Shields offensively.

In the first inning, four of the first five Trojans batters reached base safely. This set up senior first baseman Shelton Cajudoy, who came up to the plate late in the first, with two men on and one out. The slugger then whacked a home run over the left field fence.

Pahrump Valley (7-9 overall, 2-3 Sunset League) scored five runs in the first and never looked back. Cajudoy drove in five of Pahrump’s 11 runs. This was his third home run of the year.

The Cheyenne (1-5, 1-4) pitching had major problems. Their lead pitcher was a junk-ball pitcher, who specialized in the knuckleball. He couldn’t find the plate.

He walked at least three batters and hit two others and he also had numerous passed balls, which led to Pahrump runs.

Hayes said he was pleased with his defense, which recorded no errors during the game.

“We expected it to be solid from the get-go,” the coach said. “Drew Walker is our anchor in the middle and Adrian Barbier shook off some early season rust to solidify the right side. Parker Hart and John MacDonald are both solid defensively on the corners. Willie Lucas has improved tenfold (as catcher) from the beginning of the season ‘til now.”

Hayes also praised his outfielders and believes he has some of the top outfielders in the league, led by junior Aaron Fuentes.

Pahrump will take on two division leaders, Boulder City and Faith Lutheran in next two games.