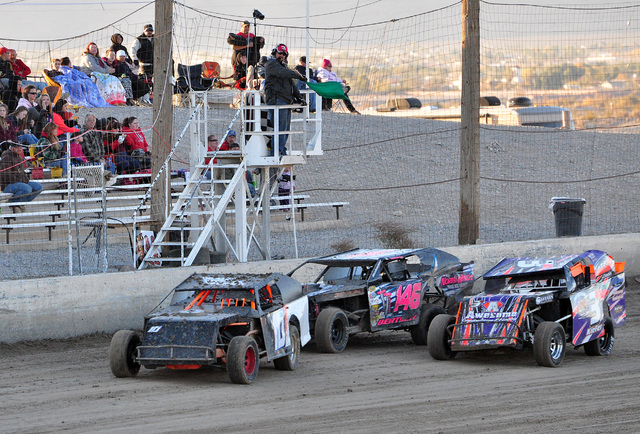 Who is Kyle Heckman? Ask around the track and really nobody knows. Even the owner of the track, Chad Broadhead had to be reminded who he was. Heckman was the man who returned to the Pahrump Valley Speedway to win another $1,500 purse at the second annual After the Duel last Saturday. Heckman also won the Sam Stringer Memorial this year in July.

Heckman calls Nipomo, Calif. his home. He has been racing for 16 years. He started with go-karts and eventually graduated to dirt oval tracks. He is slowly working his way into the NASCAR circuit.

Broadhead said the last big race of the season ended in success.

“It was a pretty good show,” Broadhead said. “We had a lot of good racers come through town. We only had five local racers out of 20. The rest were all out of town. I was surprised our drivers didn’t show up. I am not sure why. Last year was the opposite, we had all locals. Everything went good. We took a little bit more time when there were yellows (flags) to make sure the cars were lined up correctly. It was a beautiful show and all classes were represented very well.”

Broahead said he was glad that an outsider took the race. He is hoping to catch a lot more racers for this race. The whole reason he set up the race last year was in hopes that more outside racers would come to Pahrump.

“I am glad to see an outside guy came in and took it,” he said. “They all talk about other racetracks and they come to this track and they are all amazed. Racers (out of town) after the race stated that this was the best racetrack they have ever raced in their entire life.”

He said he was fully committed to making this event an even bigger event next year.