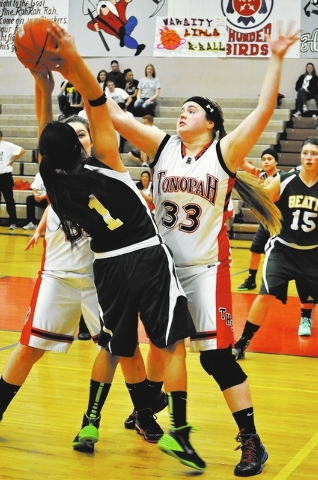 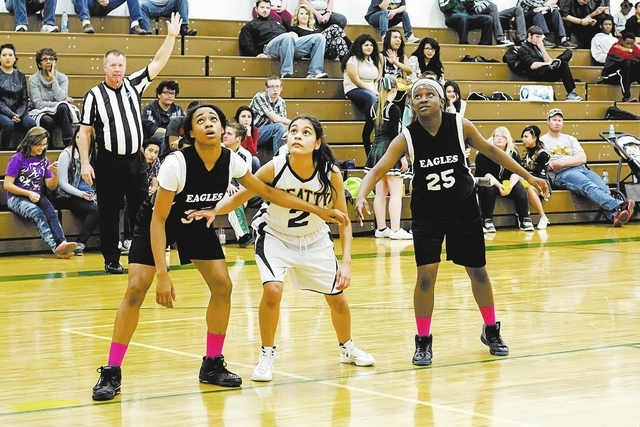 The Lady Muckers and the Lady Hornets always put on a great show every time they meet and last Saturday’s game was no different.

The two towns have played each other for what seems like an eternity. It is one of the oldest rivalries in Division IV basketball to this day.

This year the game was played in Tonopah. The Hornets played Beaver Dam on Tuesday, and Word of Life on Friday (44-6). Beatty Coach Aimee Senior said, “We beat up on Word of Life, I wish we had beat up Tonopah like that.”

They traveled to Tonopah on Saturday and were defeated 36-22 by a great Lady Muckers defensive team.

The girls will go head-to-head with Sandy Valley on Friday away at 6 p.m.

The Muckers are undefeated in league and are tied for first place with Pahranagat Valley at 3-0. The Muckers played three league games last week and downed Round Mountain (35-34), Indian Springs (50-43) and Beatty.

In addition to the Muckers’ great inside game, Muckers Coach Russell Olin likes the way his girls shot last weekend.

“Our biggest strength is our balance. We have three or four girls scoring or close to scoring 10 points a game,” the coach said.

The Muckers’ Maddi North was the leading scorer of her team with 24 points in the last weekend. She had 11 points against Beatty.

“Kathy Swafford had her best game of the season on Friday against Indian Springs. She scored eight points, but more importantly it was her calm influence that settled the team down. Maddi is looking to score more, and she averaged double figures this weekend,” Olin explained.

The coach added Julia Klapper scored 19 points and had 15 rebounds, and Ashley Gray grabbed 17 rebounds and scored 10 points over the two games.

The main challenge for Olin’s team last weekend was Ally Otero’s injury, but her absence was made up by teamwork.

“We had to replace her scoring, defense and rebounding. Luckily, the girls were able to do so,” Olin said. Otero is out with a broken wrist suffered in last week’s game.

The Muckers basically had great defense that kept the Hornets from penetrating inside.

In Division IV, the Pahranagat Valley Panthers are still playing tough and they are the team to beat this year.

The Lady Muckers will need to play their hearts out on the court to beat the Panthers this Friday. “We need to play our game, not their game. They are quick so we need to watch our passes, the receiver needs to step to the ball and so try to limit our turnovers,” Olin explained.

According to the Muckers Head Coach, the girls also have to “stop their penetration on offense, and hold them to one shot.”

At this point, Alamo’s record is 14-4 and 2-0 in league (without counting their next clash against Lund on Tuesday the 21st first league game and defeated Indian Springs last Saturday (13-66).