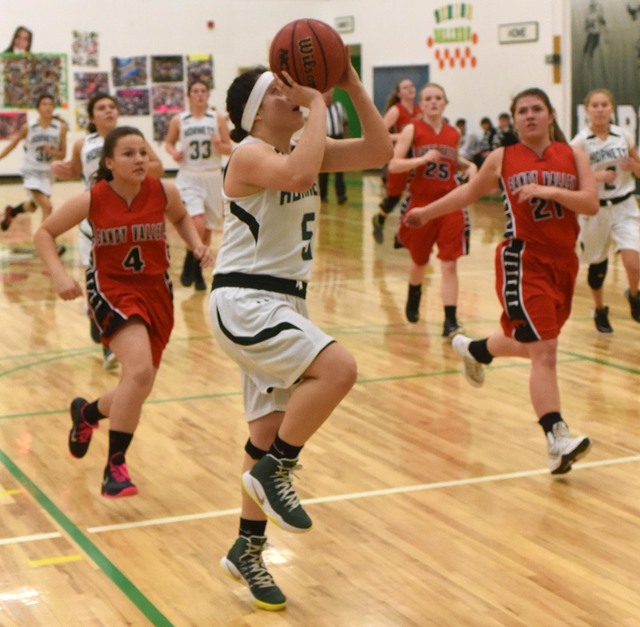 Alexia Gil finds an opening against Sandy Valley on Friday. Gil led the Hornets in scoring on Friday with 14 points and then had double-digit scoring again against the Diamondbacks on Saturday with 11 points. Richard Stephens / Pahrump Valley Times

The Lady Hornets were on a roll as they smashed through Sandy Valley 55-8 on Friday and then beat Beaver Dam on Saturday 44-28 in league action at Beaver Dam.

Beatty (9-4 overall, 3-0 Class 1A Southern) hosted the Sidewinders (2-4, 0-2) and Alexia Gil led the team in scoring with 14 points followed by Claudia Granados who had a double-double with 11 points and 10 rebounds.

Although Hornets coach Aimee Senior said her team came out sluggish against Beaver Dam (6-10, 1-3), Granados remained hot and recorded another double-double, leading the girls in scoring and rebounding with 13 points and 16 rebounds.

Gil also had a good day against the Diamondbacks and was one short of a double-double, with 11 points and nine rebounds.

The coach said the team had a good run in establishing a lead early in both games.

“We are doing well with our fast breaks,” Senior said. “We are making most of our layups. That’s how we’ve been getting our leads.”

She said her team needs to work on the press.

“We are trying to work on our full court press, and against Beaver Dam, they broke it pretty easily,” the coach said. “So we still need to work on that. Our turnovers are terrible and we just get too excited and just throw the ball away. When we settle down and play, we do better.”