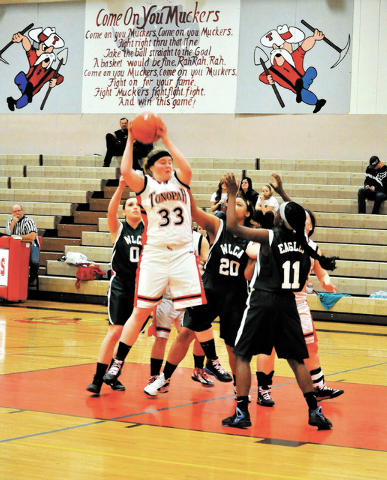 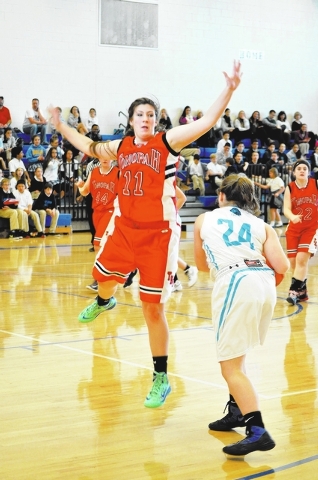 The Lady Muckers are set to play in the playoffs after beating the Adelson School Lions 51-19 last Friday. The win kept them in second place in league play, with just one game left to play in the regular season. The last league game will be an away game on Feb. 14th against Lund.

Muckers Coach Russell Olin believes the team is heading in the right direction.

“We are finally getting healthy. The team will keep working hard as the season winds down,” he said.

“The season has been a learning experience so far, both on and off the court. We are learning from our losses, trying not to repeat our mistakes and using practice to improve,” she said. “I feel like we play better as a team. We got some open shots, created turnovers, and controlled the boards. I strongly believe that we are beginning to click, and we are starting to recognize each other’s moves.”

The Muckers have already succeeded in scoring from inside the paint and also from the outside. The team’s rebounding has been significantly improving with each game and the defense has become one of the Lady Muckers’ strengths. The team played great defense against Adelson and did not give their opponent second shots. Adelson only scored 19 points.

“Our defense held our opponent to 1 point combined in the 2nd and 3rd quarter,” Olin explained. According to Olin, every one played well as a team against Adelson.

During the game the Muckers were tough on the boards. Tonopah grabbed 50 rebounds and Ashley Gray had 17 of them.

“It took a total team effort to defeat Beaver Dam. In this game, 80% of our shots were taken in the paint. This was a combination of driving to the basket, and getting a lot of offensive rebounds. We were also able to run time off the clock at the end of the game,” Olin said.

Although it was a non-league game, it was surely an important victory for Olin’s team.

“Beating a team as good as them just builds confidence in ourselves,” Gray explained.

With this win, Lady Muckers have achieved four straight wins, putting a current record of 10-7 and 6-1 in League. But the moment of truth is drawing closer.

According to the coach, there is still a long way to go before the team can start thinking about the state championship. They prefer to take one step at a time. At this point, their main concern is focusing on the last clash of the regular season against Lund but with an eye on the zone tournament.

“We have to play hard against Lund. We can’t get complacent. We will work on getting better,” Olin explained.

Gray agreed with Olin, “We have to play one game at a time. State is in three weeks and we have to focus on this week first,” Gray said. “In my opinion, the last league game against Lund is ‘make it or break it.’ If we win, we will be second seed with a first round bye in the divisionals, and if we lose we could possibly drop down to 3rd or 4th seed. We need to come prepared, expect the unexpected, don‘t underestimate, and play our game.”

After visiting Lund, the Lady Muckers will welcome Eureka for a non-league game on Feb.15th. Olin is aware of the importance to do well against the Vandals. The Vandals are one of the top teams in the North.

“We need to show ourselves that we are improving as a team and there are five seniors for whom this will be their last home game of their career,” Olin said.