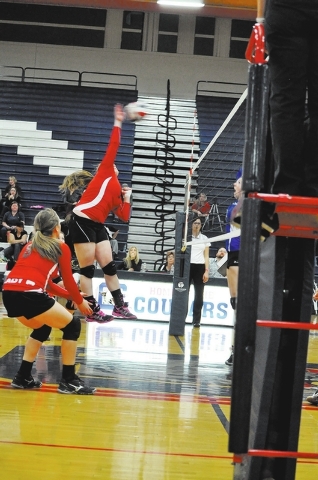 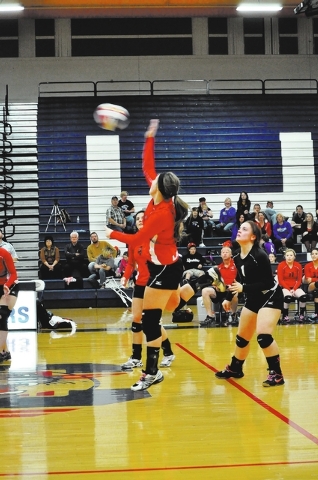 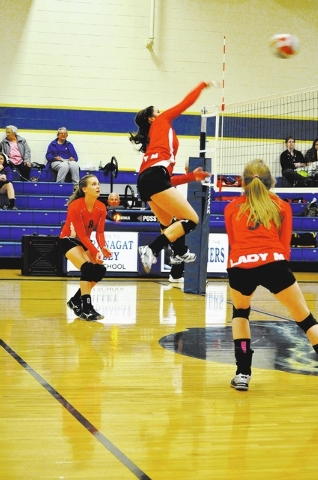 The chase to another state championship title came to a halt Friday night for Tonopah when they played Smith Valley in the semifinal round of the Division-4 state tournament. Smith Valley beat Tonopah 3 sets to 1.

Both teams had very strong performances. Tonopah lost the 1 and 2 sets of the game making a rather large hole for the team to try and dig out of. However, Tonopah grabbed a shovel and started digging, determined to keep that hope alive. Tonopah won the third set 25-18.

The team rallied during that set and began making some impressive plays. Lots of digs, saves and even stronger serves.

Head coach for Tonopah, Javier Gonzalez, was overall proud of his team’s performance. He did everything he could to prepare them for this game.

Gonzalez said, “We went through everything. We prepared and it just didn’t work out for us tonight. We had too many errors.”

Those errors took Gonzalez by surprise.

Gonzalez said, “Our mental errors got us. Something we are usually pretty good at. We had a lot of serving errors.”

It looked like those errors were going to be out-shined by their perseverance as they came into the fourth set. The long volleys, good control and incredible effort looked like the team was going to dig, literally dig every ball they could and some they shouldn’t have been able to, their way out of the hole and into the finals. Smith Valley regrouped, however to come back and win the fourth set.

Gonzalez spoke of his team’s toughness.

Gonzalez said, “My girls are conditioned well, great athletes and they are a very mature group of young ladies.”

Despite the disappointment and heartache, Gonzalez told his team to keep their heads up.

Gonzalez said, “Yeah, it was a heartbreaker, but I told them if they could walk off of the court and look back knowing that they left everything out there they would walk off as champions. And to me they are champions.”

Head coach for Smith Valley, Ally Sceirine, came into this match up knowing that Tonopah was going to be a tough win.

Sceirine said, “I did my homework beforehand. We played them last year but that was the first time we had made it to the tournament so I think the girls were a little googly-eyed when we got here. This year we came to play.”

Sceirine’s homework gave her a strategy to focus on for the tough match-up.

Sceirine said, “We focused on attacking the ball. They have some really strong girls but I think we were pretty evenly matched.”

With this being the second year that Tonopah and Smith Valley have played each other in the first round of the State Tournament, it is likely the beginning of a pretty consistent rivalry for the future. However, both teams seem to be losing quite a few players.

Gonzalez said, “I have too many seniors. I am losing like 7 girls. This was a big class. I just hope they aren’t disappointed and can hold their heads high knowing they fought hard.”