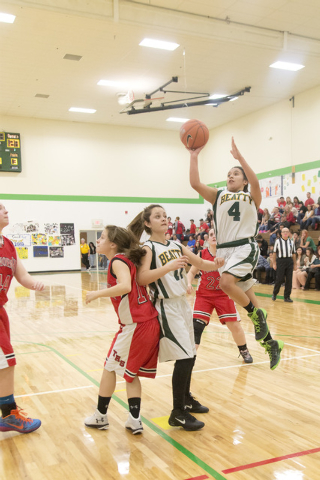 The Muckers and the Lady Hornets had a showdown last Friday in Beatty with the Muckers winning, 39-37. It was another classic game between the two rivals. Beatty (6-5 overall, 4-5 Division IV Southern) needed a win to keep them in the playoffs but the Muckers (6-15, 5-4) came in and spoiled the night.

For Hornets Coach Aimee Senior, this season has been a rough one to handle. The season started off promising. She had said early on that these girls were good, but some minor injuries and illnesses took away a win here and there.

The loss put a damper on senior night as the team bid farewell to its seniors.

The girls had three seniors on the team this year. Sinai Hernandez, Eaire Davis, and Rosie Cimental have played basketball all four years of high school.

Senior had this to say about Hernandez, “Sinai has been injured the majority of this season, but works hard and is always working on improving herself, on and off the court. She always has a smile on her face and is a joy to have on the team. She is a sweetheart.”

Senior said Davis gives basketball everything she has.

“When she is playing, she tries very hard at being the best player she can be,” the coach said. “She has determination when she wants to do something, which is a good quality. When she puts her mind to rebounding, she can jump higher than anyone. She is enjoyable to have on the team because she can make all of us laugh!”

Senior said Cimental works hard, does what she needs to make herself a better player, and always has a smile on her face. “She is wonderful to have on the team because she is always happy, and has a positive outlook on life,” Senior said.

The Beatty boys basketball team lost a close game 44-48 to rival Tonopah at home last Friday. The game was for pride because the loss didn’t hurt Beatty’s playoff chances.