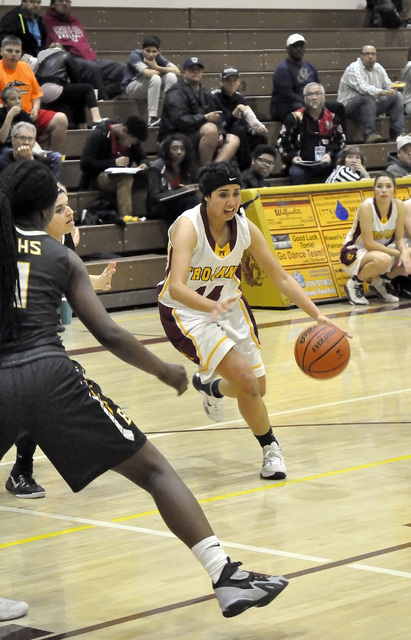 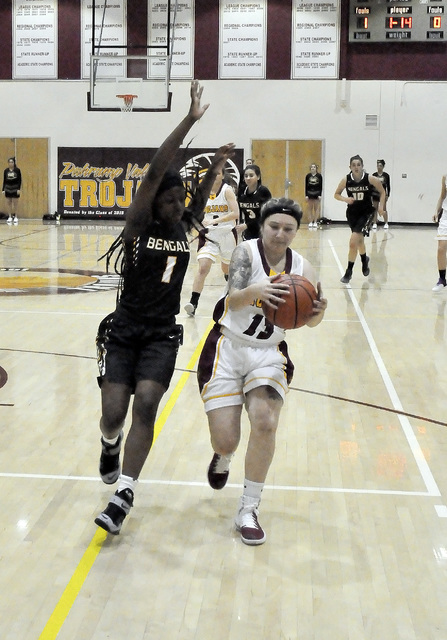 Sabin Chaidez drives the ball against Bonanza on Dec. 12. She went down hard late in this game with a knee injury. It is still unknown whether or not she will return to the team. Horace Langford Jr. / Pahrump Valley Times 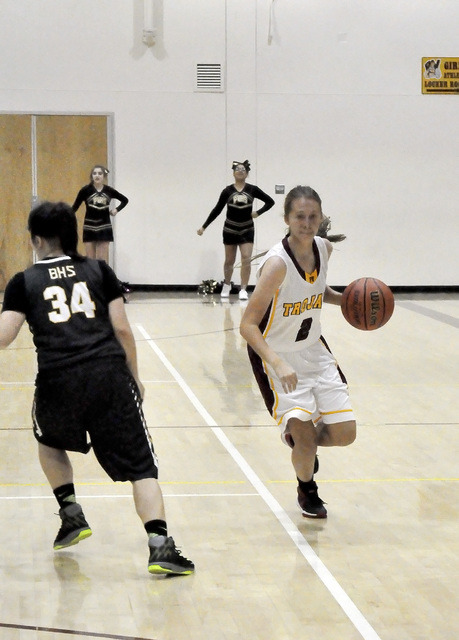 The Lady Trojans basketball team head into the winter break on a downer as they lost three tough, close games in a row at the Bulldog Tournament over the weekend.

Trojans coach Bob Hopkins said he is hoping that Santa brings him some offense for the start of conference play in January.

“We played horrible the last two games,” Hopkins said. “Against Pahranagat Valley we scored three points in the second and none in the third.

He said Panguitch was a better game.

“Our problem on offense is there are minutes where we don’t do anything,” he said. “I was disappointed and the team was too. But there were some bright spots, and we’ve just got to keep working at it and just have to get better.”

The coach said that he had seven practices before the Virgin Valley (8-3, Sunrise League) game on Dec. 29 at 5 p.m. He said his team during those practices will work on rebounding and shots.

The Bulldogs won their own tournament, but Hopkins doesn’t think that will mean the Bulldogs are the team to beat.

“That’s all about match-ups,” he said. “Our team can play against anyone when we are playing well.”

He said he will be working on offense during the break.

“We shot poorly,” Hopkins said. “We missed the bunny shots, which are the point-blank shots and we can’t do that.”

He also said he wanted his team to be upset about losing, so they don’t get in the habit of losing.

“I really think we will be fine,” he said. “Sometimes we get stagnant and we quit moving. A lot of our problem has been unforced turnovers. But we have not turned one over due to a press in the last four games.”