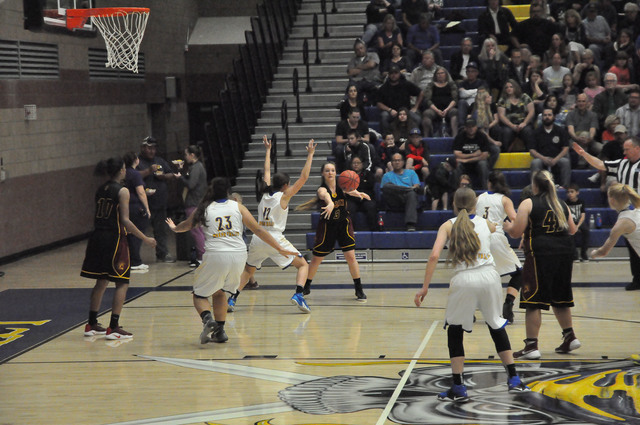 Jackie Stobbe looks for an opening in the Moapa Valley defense on Wednesday night during the Class 3A quarterfinal game in Overton. Vern Hee / Pahrump Valley Times 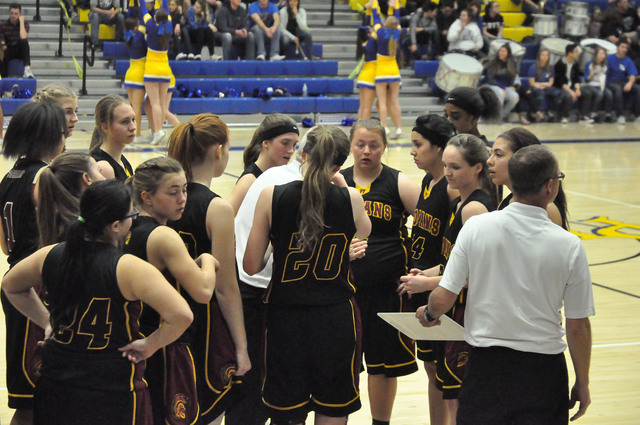 The Lady Trojans take a timeout in the second half, trying to figure out how to score on the Pirates defense. Vern Hee / Pahrump Valley Times 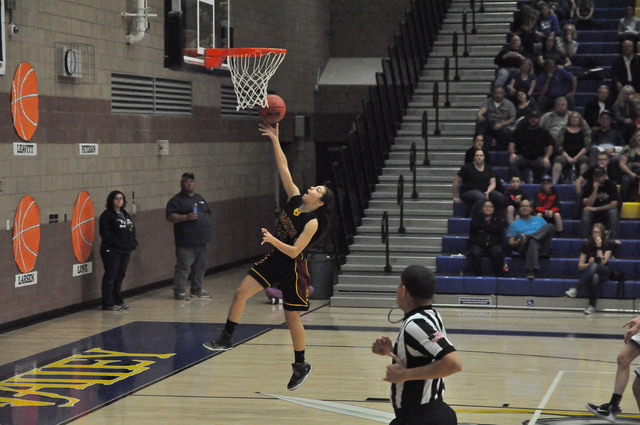 Senior Isabelle Meza makes a layup late in the fourth quarter. This would be her last shot as a Trojans basketball player. She led the team in scoring with seven points during this game. Vern Hee / Pahrump Valley Times

OVERTON—The Lady Trojans had an off game and that can’t happen in the playoffs. Moapa Valley ran away with the game, winning the Class 3A quarterfinal playoff game 42-24 on Wednesday night.

The Trojans (12-14 overall, 5-5 Sunset League) had everything against them, having to travel 120 miles to Moapa Valley High School, playing their first playoff game since 2008 and also having the knowledge that they lost to the Pirates by 15 points the first time they played them. Finally, they had to play the game in a hostile environment, which can be unnerving.

“We turned the ball over a lot and they had eight points in the first quarter before we even had a shot,” Trojans coach Bob Hopkins said. “I think we haven’t been in the playoffs in basketball in a long time and nerves came out.”

Playoff experience is what counts in many sports and basketball is no different. The Pirates had gone to the playoffs last year and in 2013.

At the end of the first quarter, it was 16-2 Pirates. Things continued this way in the second quarter and by the end of the half it was 27-8 Moapa Valley.

By then Pahrump had dug themselves too big of a hole to climb out.

After the half, the girls continued to turn over the ball. The Pirates defense inside the key was tough and in the second half this kept the Trojans shooting outside.

In the fourth, with time running out, the Trojans starters managed only 7 points. Hopkins made the decision late in the fourth with only 3 minutes, 22 seconds left in the game to rotate in junior varsity players, who then played the remaining minutes.

“We have a lot of young kids to build on,” he said. “I am happy we made it this far and the future looks bright. Our seniors kick-started the program. Next year we won’t have to teach as much of the basics for the freshmen and junior varsity players have been learning the offense and the defense. They are even using our system at the middle school.”

The Pirates (24-5, 8-2) advance to the semifinals against Cheyenne (18-6, 10-0) on Friday at Sunrise Mountain High School at 6:20 p.m. Hopkins said if Moapa Valley can stop Cheyenne from running with the ball, they have a chance of beating them.

“I think Moapa Valley has more weapons than Cheyenne,” he said. “The Pirates have three or four good outside shooters.”