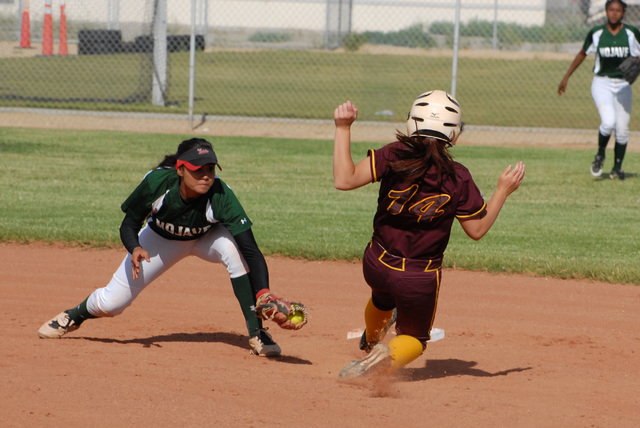 It’s coming down to the playoffs and the girls are learning to play with what they have.

When the season started Trojans Coach Ely Armendariz had only 12 junior varsity players and maybe 13 varsity players. This didn’t give him that much room for injuries or any other problems that might come up during the year.

The problem arises when he wants to bring up girls from the junior varsity to give the girls more experience for next year — he can’t.

He had this opportunity with the Desert Pines team.

The Lady Trojans played 4 innings of error-free ball at the home of the Desert Pines Jaguars on Friday and they completely destroyed them 23-2. The team scored 13 runs in the 1st, 2 in the 2nd, 2 in the 3rd and 6 more in the 4th when the game was called because of the ten-run mercy rule.

Armendariz was not expecting a tough time from the 0-8 Jaguars, but he also did not expect Desert Pines to be that bad of a team. He said they made numerous throwing errors and the pitcher was wild.

He also said the last couple of teams have not been a real test for his hitters. The coach is worried about going into Faith Lutheran next week without seeing good pitching.

During the Desert Pines game he intentionally sat Whitney Roderick and Amanda Pryor out during the game and the team still managed to produce 17 hits.

He brought up Samantha Altiero, who got a double.

At the moment, one of Armendariz’s worries is that someone will get hurt and he will not be able to replace them. Just recently he lost his starting center fielder and big hitter Madison Hurley to a freak accident at practice, where Hurley broke her finger catching a fly ball. She is out for the season.

The Trojans face three road games in a row starting on Thursday against Western (2-4). They then travel on Friday to Chaparral to play the Cowboys (1-7) and end the trip with division leader, Faith Lutheran, on Monday (6-0).

“We are road warriors so playing away from home is no big deal. We need to play good error-free ball this next week against Clark and Western to get ready for Faith,” he said.

The team is firmly in a second place tie with Cheyenne with a 4-2 record. Cheyenne has to play Faith, Clark and Western. If Pahrump can beat Faith, it will have sole possession of second place. In order to do this, the team has to be error free and be hitting at its peak. This didn’t happen last time. The Trojans had numerous fielding errors against Faith and just couldn’t put together a good offensive inning.

“Against Faith we can’t leave people on the bases,” the coach said.

Armendariz hopes his team will gain some confidence in the next two games for the Monday game against Faith.