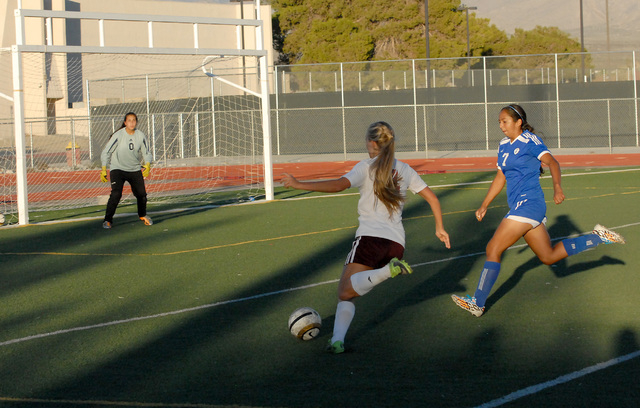 “We need to win all our games and we need some strategic losses. We will go for Clark’s position, they are the weakest team,” the coach said.

Clark plays one more game against Spring Valley and Spring Valley has two more against Mojave (0-14, 0-12) and Clark. The Trojans looked like a solid team against second place Sierra Vista (9-4-1, 9-4) and led the Mountain Lions early on a Paige Chaffee goal at 22:13 in the first half. The Trojans dominated the first half 1-0 with excellent passing and great defense.

In the second half, the Lady Trojans used the speed of Jamie Murphy to score their second goal. Murphy took the ball around a defender and was one-on-one with the goalkeeper and kicked the ball over her head for the goal.

Murphy feels she now has the confidence to score more points.

“I have a better mentality now that I made my second goal. I feel now that I scored today I can score more,” she said. “For this goal I relied on my instincts. I wanted it to be just one touch and not play with the ball too much. So I just kicked it toward the goal and it just magically went over her head.”

Chaffee felt the same way about her goal.

“With my goal I just kicked it and hoped it went in,” she said.

Chaffee also believes her team is on a roll. “I have a lot of faith in our team that we can win the rest of our games. To do this we have to work together,” Chaffee said.

Midway through the second half, Sarah Dennis collided with a Sierra Vista player. After that, she told her coach her knees were hurting and she left the game. After her departure, the team lost a step and the Mountain Lions scored their only goal.

“I hurt my knee during practice when Britney (Klenczar) and I collided. It has been hurting since then, so when I collided with the Sierra Vista player it just hurt too much,” Dennis said. Dennis should be fine for the last two games.

The coach believes her team has played well in the past two games despite the loss to Spring Valley earlier in the week. She believes Spring Valley to be the better team despite Sierra Vista’s lead in the standings.

“Sierra Vista has a couple of new club players and they did great,” Larmouth said. “They were very good, as good as I have seen but we stopped their main scorer today. The last game they scored 5 goals against us. Our team played well against Spring Valley and I did not change anything up for today’s game.”