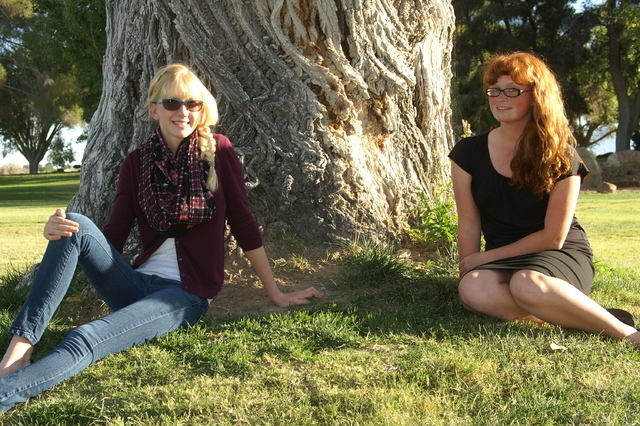 Junior Kellie Hunn from Pahrump just started golfing last year and she never thought she would go to state this year, but she made it along with her teammate, Sophomore Riley Moore.

The top two golfers for Pahrump, Jayde Woodworth and Natalie Hunn did not make it to state. The main reason was illness. The team was rocked with a nasty virus that kept Natalie and Woodworth out of some major tournaments.

Natalie missed one tournament and maybe she would have gone if she had been well. Missing this tournament put her score in the non-eligible range to go. Woodworth missed more than one tournament.

This left both Kellie and Riley Moore to attend the regional tournament at Boulder Creek and then state.

The state tourney was played at Ruby View Golf Course for the state title last week on Monday and Tuesday.

Hunn said she had a hard time at Boulder Creek. She said Boulder Creek was one of the hardest courses she has had to golf on.

“It had lots of hazards on the sides and there is desert you had to hit across. The hazard was not double par. You had to keep playing through the hole. So if the ball went into the hazard you had to go back to the tee. It was a long process if you lost your ball,” she said.

Natalie had gone to state the year before and Kellie said she was the proud little sister. The two are identical twins.

Once at state the two girls battled cold temperatures and hard breaking greens.

“It was cold up in Elko,” Kellie said. “When we woke up it was 40 and the high was 55. We could see our breath when we teed off. We had hand warmers, gloves, and we stayed in our winter gear the whole time. I wore sweats and three jackets.”

Amy Moore, Riley’s mother, who accompanied Riley to state, agreed with Kellie on the cold. “The temperatures were in the high 30s and there was wind and a little bit of rain,” Amy said. “They were given hand warmers and their hands were freezing. How could you play golf in that weather?”

Coach Bob Hopkins said he just wanted his girls to know what it takes to win at state and have a good experience.

“Riley had a good first day and the girls seemed to have a good time. The temperatures were really cold. The main thing is that they got to go. Riley has two more years and Kellie has one more,” he said.

Kellie said that she and Riley both probably had higher scores the second day due to the cold weather.

Riley said the Elko greens were not only tough but they were very weird.

“We would putt one way and they would go the opposite way,” Riley said. “When it didn’t look like it was going to roll that way. This definitely threw off my short game. My putting was horrible. I was so mad at these greens. I didn’t know what to do and I didn’t know how to handle it. It looked like the ground was flat and then it would start rolling down somewhere.”

Kellie said the experience of state has inspired her to want to get better next year. “I want to do better now,” she said. “So I can do better and have a chance of going to state next year. I think also there is some sibling rivalry too. Now I think there will be a little more competition between my sister and I now that I have gone to state.”

Riley was impressed by the caliber of play at state and this made an impression on her.

“When I saw how far the other girls could hit it motivated me to try harder and to practice every day,” Moore said. “Golf is a frustrating sport and you just have to shake it off and go on to the next hit.”